Momentum expected to continue over next few quarters 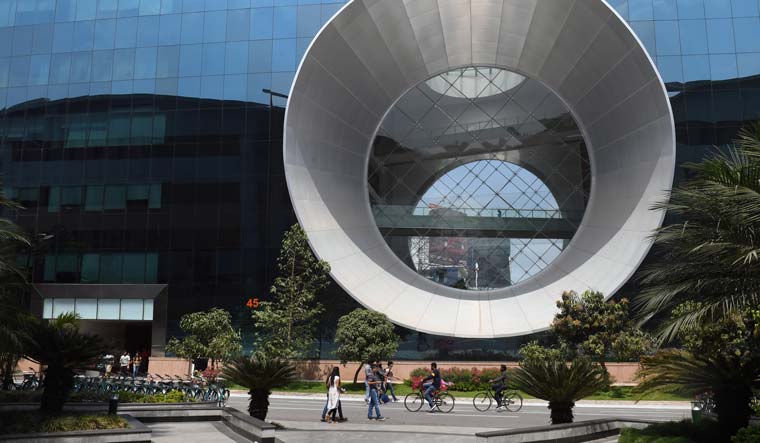 The recent quarterly results of Indian IT services companies such as TCS, Infosys and Wipro indicate healthy growth with big deal wins marking a positive momentum for the sector. This momentum is expected to stay over the next few quarters as well.

As India's largest IT services company, TCS had a strong recovery post the initial phases of the COVID-19 pandemic. It indicates continued strength in the technology spending environment, along with the capability of the company to capture outsized market share. The management commentary on enterprise demand, especially on Cloud, implies a positive outlook for the other IT services companies as well. TCS also highlighted a robust deal pipeline, with a mix of small and mid-sized deals along with a few large ones, giving it confidence on client spends. As per a report by the firm Motilal Oswal TCS continued to positively surprise the market with its ability to manage attrition which was a record low of 7.2 per cent despite higher demand for talent in the market as the TCS management feels that won’t face much pressure given its ability to train its employees in digital skills. At the same time, TCS also added 19,400 employees in Q4FY21, the highest in its history.

Experts at Motilal Oswal expect TCS to be relatively better positioned (versus other companies in the sector) to leverage the acceleration in large deals as clients increase spends on cloud technology. It is expected that the company may deliver 16 per cent dollar growth CAGR over FY21-23E. The growth of the company was also broad-based across verticals such as BFSI, Retail, Life Sciences and Healthcare, manufacturing, technology and services and communications and media. The growth for TCS was dominated by continental Europe, North America and the UK. TCS also has a strong order book and pipeline, which will result in strong growth momentum in FY22.

On the other hand, IT major Infosys also saw healthy double-digit YoY revenue growth in verticals such as BFSI, Hi-tech and Life sciences though the EBIT margin stood at 25.4 per cent, declined 94bps QoQ, impacted predominantly by the wage hike. As per a report by the HDFC Securities wage increase effective from July’21 will impact margins in 2QFY22, in addition to the Daimler deal transition. The report points out that out of the 23 large deals wins in the Q4 FY21—six each were in BFSI and retail, three in Life sciences and two each in communication, manufacturing and other fields. By region, 16 deals were in the US, six in Europe and one in the rest of the world. The utilisation of the company also stood at an all-time high of 87.7 per cent. The company also announced a share buyback of INR 9,200 crores. Infosys is expected to garner a US $ revenue growth between 12.7 to 16 per cent for FY22/23E with 1QFY22 at 3 per cent QoQ.

For the IT major, Wipro market experts feel that despite a very strong order book and ramp-up in two mega-deals the 1QFY22 revenue growth guidance at 2-4 per cent QoQ in CC was unexciting. As per a report by Motilal Oswal excluding the mega deals, this implies no growth at the lower end, which is weak even after adjusting for seasonality. The report also points out that Wipro should see multiple margin headwinds due to large deal ramp-ups, wage hike, investments etc. The report observes that the management’s growth strategy, continued investment in talent, and a simplified operational model to help improve the focus on customers is a step in the right direction. With Wipro's growth lagging compared to its peers the impact of its new strategy on organic growth may be the key factors for its future growth.

The growth for Wipro was broad-based across the US and Europe, which grew in line with Wipro's growth rate. There was also an addition of 7.7k employees including onboarding of over 2,850 freshers in 4QFY21. The Wipro management is seeing strong opportunities in new accounts and existing accounts have picked up as well.