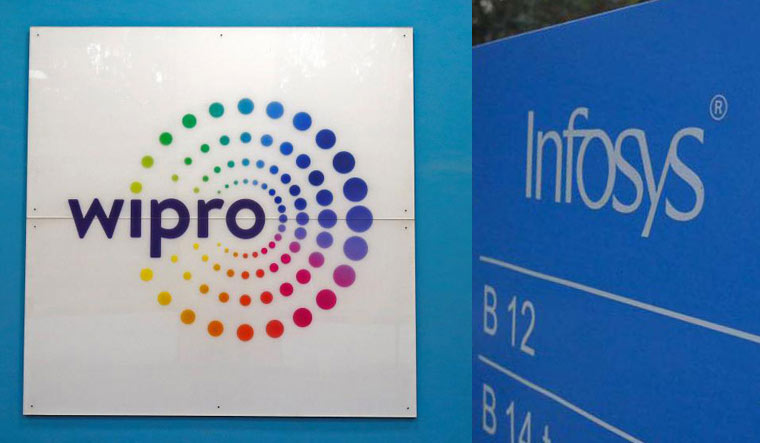 File photo of the Wipro and Infosys logos | Reuters

The two large deals won by Infosys and Wipro augurs well for the Indian IT services industry as the deal pipeline expands in scale.

Infosys won a $3.2 billion deal from the German automotive manufacturer Daimler AG wherein it would help the company to transform its IT operating model and infrastructure landscape across workplace services, service desk, data centres and networks. On the other hand, Wipro won a multi-million dollar deal ($700 million) with the German wholesale firm Metro AG. More than 1,300 employees across Germany, Romania and India will transfer to Wipro as part of the deal. Though the deal pipeline for Indian IT services firms was already strong in June and July, it is now converting into transformational large scale deals.

“Large Indian IT services companies such as the Infosys and Wipro have the required bandwidth and strength to scale and handle such large scale deals. Going forward there could be large deal wins by even mid and smaller Indian IT services companies. Deal size is getting larger and the offshoring component due to Work From Home (WFH) is growing bigger in such deals. Companies are also not sending their employees for onsite work due to the Covid-19 pandemic. Offshoring proposition is helping the Indian IT services maintain better margins in these large deals. Companies have realised that they are saving on costs due to the offshoring model as they do not have to send their people abroad at customer locations,” Amit Chandra, Assistant Vice President at HDFC Securities told THE WEEK.

This expert feels that all these large deals are full stack transformational deals that involve end to end work from front end to back end. They involve application maintenance and infrastructure management and also a complete transformation of the IT infrastructure of the customer.

It is observed that, when compared to the North American markets, the European markets have been a tad conservative in signing up with Indian IT services players, especially when it comes to strategic outsourcing. Infosys and Wipro winning billion-dollar deals in the heart of European manufacturing companies shows the prowess that both Infosys and Wipro have come to acquire even during the pandemic.

“The CEO's of both Infosys and Wipro have extensive experience in the European markets. They understand the European sensibilities and it shows that the decision of having leadership from Europe have allowed these firms to pierce open challenging customers. These deals also give increased legitimacy to both Infosys and Wipro. There is a distinct possibility that more strategic customers will bestow their trust in these firms in the future,” pointed out Alok Shende of Ascentius Consulting.

A report from Emkay Global Financial Services points out that Wipro’s deal with Metro is in line with its strategy of focusing on the Europe region as the company looks to scale business and accelerate revenue growth in the region. Emkay expects Wipro’s dollar revenue growth to accelerate in FY22 to 8 per cent from a low-single-digit decline in FY21. This deal is broadly in line with these assumptions.

A Motilal Oswal report also states that the large deal wins for both Infosys and Wipro reinforces its positive stance on the IT services industry. The deals will present an opportunity for Indian IT companies to increase their penetration in Continental Europe, which has historically lagged the US in outsourcing adoption.

“Companies globally are trying to improve efficiency and optimising costs. Smart companies are utilising this pandemic time to get the best deals done from the IT Services players. Though the pandemic created some disruption in the initial days, businesses have understood the need of expeditious digitisation and automation leveraging new technologies to enhance their existing business models. So this is good news for our IT services companies,” remarked Aditya Narayan Mishra Director and CEO of CIEL HR Services.