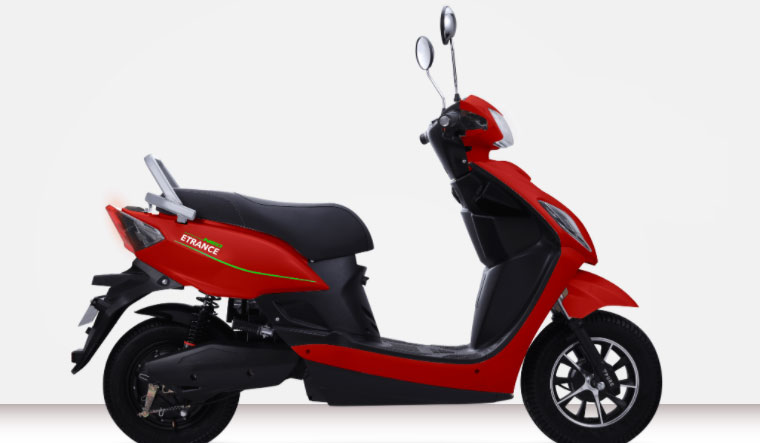 Hyderabad-based electric two-wheeler startup Pure EV is set to ride in a new long-range scooter and is also looking to shift production to a bigger manufacturing plant as demand for personal mobility continues to gain traction, in the backdrop COVID19 pandemic.

The new high-speed and long range Etrance Neo offers a pick-up speed of 0 to 40 kilometers per hour in five seconds and its 2,500 Wh battery provides a range of 120 km on a single charge in ‘eco mode,’ the IIT Hyderabad-incubated company claimed. The scooter chassis is designed for higher speeds at par with the conventional internal combustion engine two-wheelers, it added.

The new scooter will be launched on December 1 at an ex-showroom price of Rs 75,999. and will mainly target youngsters who will find this model very appealing, said Rohit Vadera, co-founder and CEO of PURE EV.

“We are targeting sales of 10,000 units of this model in the first one year alone. The new model will be available first in Hyderabad and will be available pan India from our outlets from mid of December 2020,” he said.

The Etrance Neo will be the fifth product to be launched by Pure EV and follows Etrance+, which was launched in August at a price of Rs 56,999. That scooter offered an on-road range of 65 km. It competes with the likes of Hero Electric, Ampere and Hero MotoCorp-backed Ather Energy.

Pure EV has a 10,000 square feet research and development facility and an in-house battery manufacturing plant based out of the IIT Hyderabad campus. The focus is on development of long-range and high performance lithium batteries.

The company is looking to commission a new 2 lakh square feet manufacturing plant in 2021, which will be much bigger than the 70,000 square feet factory it has now. This will help Pure EV expand its manufacturing capability significantly to 2 lakh EVs per year and 5 GWh of battery production capacity annually, compared with the existing 20,000 EVs and 0.5 GWh of battery capacity.

The company, which has dealers across 100 locations in 20 states, is also looking to tap export markets in the near future. It has already launched its products in Nepal.

Electric two-wheelers have begun to see strong traction in India. According to Society of Manufacturers of Electric Vehicles, 156,000 EVs were sold in the year-ended March 2020 (up 20 per cent from a year ago), of which 152,000 were two-wheelers.

Nishanth Dongari, the founder of Pure EV told THE WEEK in an interview earlier that the company is expecting a 300 per cent growth in the year ending March 2021.