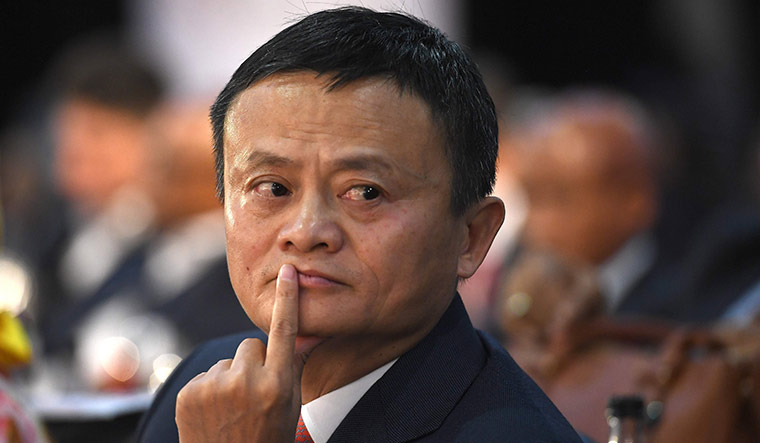 Jack Ma, founder of China's e-commerce giant Alibaba suffered a major setback on Tuesday as Shanghai and Hong Kong Stock Exchanges suspended dual listing of the shares of his world's biggest initial public offer of $39.7 billion of the group's subsidiary—the Ant Group, 48 hours before the highly-anticipated trading was due to start.

The Shanghai Stock Exchange surprised market investors with an abrupt announcement late on Tuesday that it will suspend Ant Group's IPO, as regulators and the public debate the balance between financial innovation and risk control, state-run Global Times reported.

Ant Group is reportedly being asked to clarify on its business model, financial innovations, measures to protect users' private data the platform has collected, and other issues. It is also possible that the fintech venture could be asked to restructure its business, the daily's report said.

There were signs of trouble on Monday for Ma, 56, China's iconic businessman when he was summoned along with his senior executives by Chinese regulators, which was seen as a firm sign by the officials of the ruling Communist Party of China, (CPC) to contain his new record venture.

Ant Group's shares were due to commence trading simultaneously in Shanghai and Hong Kong on November 5 in a $39.67 billion stock sale after allotment, which has broken all records as the largest fundraising in global finance.

The first dual listing of its kind on the two exchanges soaked up more than USD three trillion from retail investors, setting off frenzied bids for the shares of Ant Group, according to Hong Kong-based South China Morning Post, which is owned by Ma, reported on Monday.

A record 19.05 trillion yuan ($2.85 trillion) of bids were received from retail investors for Ant's shares on Shanghai's Star Market, exceeding the supply of shares by 870 times.

In Hong Kong, 1.55 million retail investors, or about one-fifth of the city's population, poured in HKD 1.3 trillion ($167.7 billion) for the shares when the book closed at noon on Friday, overbidding by 389 times, the report said.

Last year's sudden and surprise announcement by Ma to retire stating that he preferred to die at a beach than at his work table set off speculation that he was feeling the weight of the CPC, which firmly exercised its control over China's top businesses prompting him to downsize his business.

Born in a poor family, Jack Ma, who is the most revered businessman among the Chinese, grew up to be one of China's richest men.

His newspaper The Post on Tuesday reported that China's stock market operator has pulled the rug from under the largest initial public offering in global finance, less than 48 hours before the highly-anticipated trading was due to start.

A meeting earlier this week between Ant Group's senior executives and China's top financial regulators constituted a significant change in the regulatory environment, which may lead to the fintech company not fulfilling the listing requirements or disclosure rules of the exchange, it said citing a statement by the Shanghai bourse operator.

Ma, the co-founder of Alibaba, owns 8 per cent of Ant Group's shares, with 50 per cent of the voting rights.

The government concerns reportedly arose as the National Social Security Fund (NSSF), China's 2.63 trillion yuan pension state pension scheme has been a strategic investor in Ant Group since 2015 and remains a cornerstone investor in the fintech company.