Even when revenues fell, Centre sustained the flow of funds to states: PM Modi 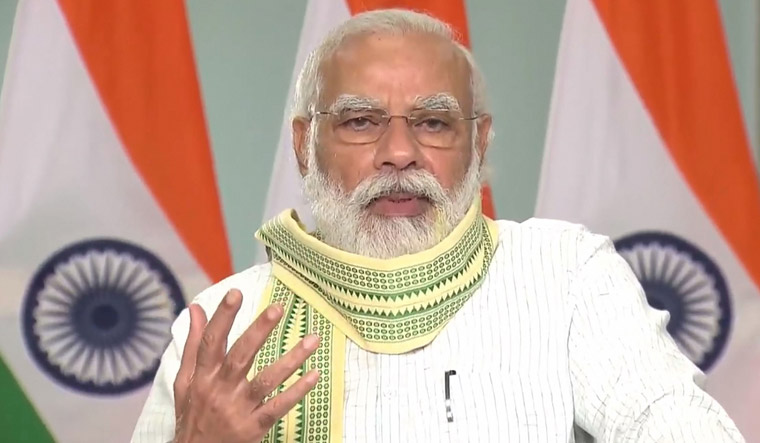 Prime Minister Narendra Modi sounded optimistic that India can still become a $5 trillion economy by 2024, notwithstanding the pandemic-induced gloom | File

At a time when the Centre has been accused of practising uncooperative federalism in the backdrop of the GST compensation row, Prime Minister Narendra Modi has said that his government has upheld and remained committed to the idea of federalism, even amid the pandemic. Emphasising the Centre's efforts, the prime minister pointed out that his government has increased the flow of funds to states, even while the revenues fell this year owing to the unprecedented pandemic.

"Between April and July, the sum total of devolution of taxes plus grants-in-aid to states, including centrally sponsored schemes, increased by 19 per cent to Rs 4.06 lakh crore from Rs 3.42 lakh crore in the same period last year. In short, while our revenues fell, we sustained the flow of funds to states," he said in an interview to The Economic Times.

Further, in view of the COVID-19 pandemic, the central government also allowed an additional borrowing limit of up to 2 per cent of Gross State Domestic Product (GSDP) to states for the year 2020-21. "This amounted to Rs 4.27 lakh crore being made available to states. The Centre has already granted permission to states to raise the first 0.5 per cent in June 2020. This made an additional amount of Rs 1,06,830 crore available to states. On the request of states, the limit of using the State Disaster Response Fund (SDRF) has been increased from 35 per cent to 50 per cent. This was done to ensure more finances with states to fight the coronavirus," the prime minister elaborated in his first interview to the media after the pandemic.

On GST, Modi said that a consensus is evolving between the Centre and the states. "On the GST, this is by all accounts an extraordinary year. Most assumptions and calculations did not take into account a once-in-a-century pandemic. Yet, we have proposed options to move forward and most states are fine with them."

On the economic front, PM Modi sounded optimistic that India can still become a $5 trillion economy by 2024, notwithstanding the pandemic-induced gloom. "Today, if our corona warriors are working 18-20 hours to serve patients, it also inspires us to put in more hard-work. So what if we could not move at the desired pace this year due to the pandemic! We will try and run faster in the next year to make up for the loss," he said.

The prime minister exuded confidence as he said the Indian economy is getting back on "track faster than expected". The Atmanirbhar Bharat package, coupled with long-pending reforms across sectors such as coal, agriculture, labour, defence and civil aviation, has put the Indian economy back. A robust agriculture sector growth, record high FDI inflows, auto sales along with tractor sales reaching or surpassing previous year levels, steady recovery in the manufacturing sector and rise in new net subscribers of EPFO—all signal green shoots in the economy. "Remember, we are still not over with the pandemic. Yet, our economy has shown a remarkable capability to bounce back, largely because of the resilience of our people," he added.

On his government's handling of the pandemic and the lockdown, the PM said India took a science-driven approach in response to tackle COVID-19. "Studies now show that this response helped avoid a situation which could have led to rapid spread of the virus with many more deaths," he said.

India's daily COVID tally has seen a drastic dip—from the highs of 90,000s in mid-September to the current below 60,000 figures. However, the prime minister cautioned that it's too early to celebrate as "the virus is proving to be very fickle". "At one time, some places like Gujarat were seen as hot spots while the situation seemed to be under control in Kerala, Karnataka etc. After a few months, things have improved in Gujarat but turning for the worse in Kerala. This is why I feel there is no room for complacency... Countries which had initially controlled the outbreak are now reporting a resurgence," the PM warned.

On the imposition of lockdown—termed unscientific time and again by the opposition and his critics—the PM emphasised that India imposed lockdown at a very critical point in the pandemic trajectory. "We not only got the broad timing of various phases of lockdown right, we also got the unlock process right and much of our economy is also coming back on track. The data for August and September indicates that," he explained.

When quizzed about availability and distribution of COVID vaccine, the prime minister assured that every Indian will get vaccinated, once it becomes available. "First and foremost, I would like to assure the nation that, as and when a vaccine becomes available, everyone will be vaccinated. None will be left behind. Of course, initially we may focus on protecting the most vulnerable and the frontline workers," the prime minister said, setting priorities straight.