Jio takes on the Snap Spectacles 3 with new gadget 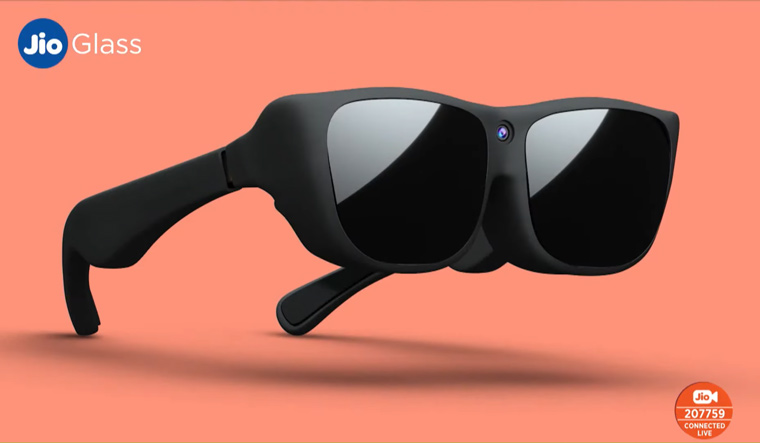 Among the many surprising announcements at Reliance Jio’s virtual Annual General Meeting (AGM 2020) was that of the Jio Glass: A 'mixed reality' headset that promises holographic videoconferencing, 3D-presentations, and more.

Weighing 75 grams, the Jio Glass looks like a regular set of sunglasses albeit for a small camera located in the middle of the unit. It connects to the internet via a cable that attaches to a smartphone. Aside from this, the hardware specs of the device are unknown—at the announcement, made by Reliance Industries President Kiran Thomas, the Jio Glass was said to be at the “cutting edge” of technology, with the “best-in-class” of mixed reality services.

A “high resolution display” and a “spatial and personalised audio system without having any accessories attached” were described: While the resolution of the display is unknown, the audio system could be utilising bone conduction technology seen in some ‘smart’ sunglasses—allowing audio to be transmitted through vibrations that bypass the eardrum.

To demonstrate its virtual calling functionality, Thomas enacted a virtual call with Akash and Isha Ambani, with Akash appearing as a virtual avatar in a 3D space while Isha appeared via a regular video-call. The demonstration was similar to how Facebook debuted ‘Facebook Spaces’ in 2017.

Thomas demonstrated how presentations could be shared and interacted with by all participants in the call. “Our way of working and workspace has changed completely. We can now reimagine this with Jio Glass where you can sit at home and join a meeting with colleagues in three dimensions...You can also have design discussions and deliberations using 3D assets and holograms with Jio Glass,” he said.

Highlighting the Jio Glass’s applications for remote classrooms, Thomas said, “Jio Glass is making teachers and students come together in 3D virtual rooms and conduct holographic classes through our Jio Mixed Reality Cloud in real time. We can literally travel to the by lanes of Agra and immerse ourselves in the wonderful architecture of the Taj Mahal or the Pyramids of Giza in Egypt or the Colosseum in Rome. With Jio Glass, the traditional way of learning geography will now be history.”

Without announcing a price or release date, the company said Jio Glasses was already supported by 25 applications.

Reliance’s entry into the smart glass space comes as COVID-19 forces adoption of remote workspaces and virtual classrooms. While earlier iterations of smart glasses like Google Glass, SnapChat’s Spectacles and Microsoft’s HoloLens all failed to take-off, Jio Glass could be timed just right for the market.

However, the elephant in the room remains the price. The Snap Spectacles 3 recently launched in India at at a price point of around Rs 30,000. The Microsoft HoloLens retail in the US for a staggering $3,500. While the technical specs of the Jio Glass are unknown, the Snap Spectacles come with two attached HD cameras, as well as with a bundled 3D viewer (AKA Google Cardboard) and shoots video in a resolution of 1216 by 1216. These are designed to be worn on the go. The HoloLens 2, however, is much heavier and designed to be a fully-fledged headset, with 2K resolution, and head and eye tracking.

Whether the Jio Glass can strike the right balance between features and affordability will prove to be the determining factor behind its success.