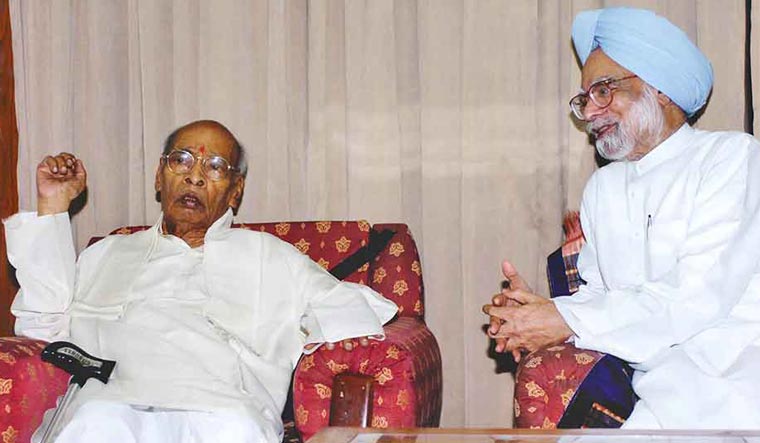 Sometimes, they say, it takes an insider to kick off a revolution. A dramatic transformation of something deeply entrenched needs someone himself working the system to change it from within. In the last century, we saw it as Mikhail Gorbachev worked his way up the ranks as a loyal comrade of the Communist Party of the Soviet Union to head it, and then dismantle it. It paved the way for the end of the Cold War as well as the Communist bloc. This century, we see glimpses of the same theory in action as once-disenchanted priest Jorge Bergoglio, reinvented as Pope Francis, tries to usher in much needed reforms in the way the world's largest religious denomination is run.

Somewhere in between comes Pamulaparti Venkata Narasimha Rao, the original 'accidental prime minister'. Just like this phrase is often used for the then-little known economist Dr. Manmohan Singh whom he pulled up into future greatness, Singh's comment toward the end of his tenure as PM that 'history will be kinder to me” seem to apply even more so for Rao, especially on his centenary in June 2020.

Not just kinder, but thankful, too. For the introverted insider who would have preferred to work behind the scenes rather than under the harsh glare of the limelight (Rao was all set to retire from public life and move back to South India – he had not even stood for the 1991 polls when Rajiv Gandhi's assassination inadvertently thrust greatness on him) the weight of what he up against probably dawned two days before he was sworn in as prime minister of a minority Congress government. On 1991 June 19, cabinet secretary Naresh Chandra showed him an 8-page note on the economic situation of the country.

Jairam Ramesh recollects in his book To The Brink And Back: India's 1991 Story, “When he saw the note, Narasimha Rao’s first response was: ‘Is the economic situation that bad?’ To this, Chandra’s response was, ‘No, sir, it’s worse.’

India's tryst with Fabian socialism was not destined for greatness even after the long years of independence. And in the summer of 1991, it was all coming to roost. The balance of payments situation was bad; even the GDP growth of 3 per cent or so was tapering off and the foreign exchange reserves had virtually dried up. The two years of unstable coalition governments made matters worse.

The writing on the wall was clear: India had no other option but to change tracks and go in for a dramatic restructuring of its economy. It may seem so logical right now in hindsight, but the country that India was in 1991 was distinctly different, having grown up on a steady diet of socialism-laced mixed economy. The CIA, America and capitalism, if not necessarily in that order, were ideas not encouraged in decent company, and most definitely equated with political oblivion.

To make matters worse, Rao had proved his mettle for years as a loyal minister in the governments of Indira as well as her son Rajiv, with his staunch protectionist, socialist credentials. Will such a man ever dare to put his entire belief system in reverse gear?

If one believes Chandra, as it turned out, it only took a few hours that hot summer day for Rao to change his mind. It also speaks volumes for the man's acumen and dexterity, attributes that would be so valuable to him in the ensuing years to ensure his political survival, too, as he faced threats ranging anything from the stability of his minority government, Babri demolition aftermath, the rise of the BJP, repercussions of the Gulf War over Kuwait, Bombay blasts fallout, the rise of terrorism in Kashmir and even the needling challenge thrown at him constantly from within his own Congress party.

But that day, Rao's mind was fully on the economic course correction he was saddled with, and to his credit, his decision was fast. The bureaucratic note had listed out the measures which the government had no option but to do (it was actually prepared for the previous government of Chandrashekar, but never implemented)—progressively dismantling the licence raj system, devaluation of the Indian rupee, cutting taxes, raising foreign investment in Indian business and economy and removing restrictions on import and export.

Of course, it is a testament to his economic vision, as well as political slyness, that he picked Manmohan Singh, an acknowledged economist but political novice, to be the face of the dramatic 'liberalisation'. Singh, impeccable in credentials if not in propriety, was the perfectly tempering foil to Rao's Chankya-esque machinations—he is said to have offered to resign three times when things didn't seem to go well. The first was just a few days into the process, when Rao developed cold feet over devaluing the rupee. He told Singh and by the time Singh contacted the RBI governor, the deed was already done. Singh promptly offered to resign, though Rao would not hear of it.

Singh recounted later that Rao had joked with him that if the reforms were successful Rao would take credit, but if they did not work out well, Singh would be sacked as the scapegoat. Perhaps, just perhaps, it wasn't really a joke.

Luckily for India and for Manmohan Singh, that moment never came. Instead, India course corrected itself into a new age of liberalisation, a sudden glut of riches and western-style consumerism best exemplified by channels like MTV and Star Plus on the new satellite TV platforms. Malls, mobiles and multiplexes were soon on their way. Detractors point out how income gaps widened with the rural population not seemingly getting their due, but the liberalisation did pull up hundreds of millions up the middle class value chain as opportunities sprouted, incomes ballooned, business boomed and the GDP went up. In 2015, India outran China to become the fastest growing major economy in the world, a direct outcome of the liberalisation policies unleashed by the Rao-Singh combine.

There couldn't possibly have been a more unlikely harbingers of change than this two. “Both Rao and Manmohan were pillars of the ancient régime, stalwarts of the very system they set out to replace,” reminisces Ramesh in his book.

While the socialist moorings on which he built up a better part of his political career caused him discomfiture at the inherent inequality that liberalised policies would inflict on the disadvantaged, many fellow ministers and bureaucrats talk of how he tried to bring in social welfare policies. Rao did steadfastly maintain his reformist zeal throughout his stint as PM. In 1992, a series of measures opened the Indian stock markets for a boom (and a whole lot of scams, too). He set up the National Stock Exchange in 1994, and progressively reduced limits on FDI and areas where foreign investors could come in. One simple statistic proves the efficacy of Rao's reforms – foreign investment in India was 132 million dollars when Rao kicked off liberalisation. As he demitted office five years later, it had risen to 5.3 billion dollars. The insider may have been forced to the sidelines as national politics, and Congress politics, transformed after the party's defeat in the 1996 elections, but the revolution he sparked off from within is what still gives the sparkle to India's calling card on the world stage.