This is expected to affect a lot of Indian IT professionals 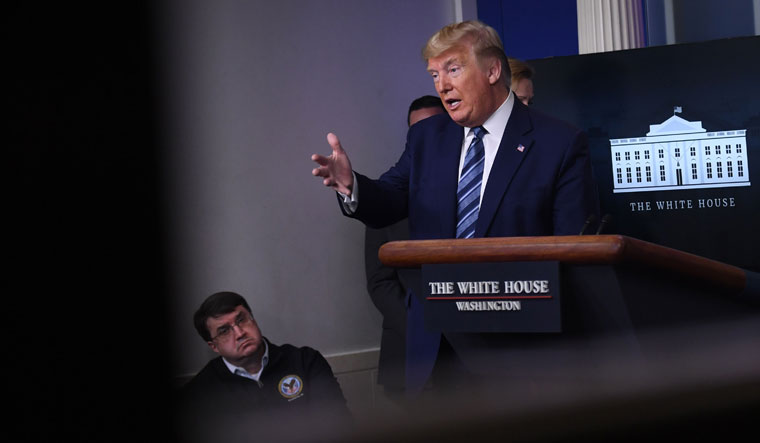 US President Donald Trump has issued a proclamation to suspend issuing of H-1B visas, a move which is expected to affect a lot of Indian IT professionals, along with other foreign work visas for the rest of the year. Trump said the step was essential to help millions of Americans who have lost their jobs due to the current COVID-19 induced economic crisis.

The proclamation suspends and limits entry into the US of H-1B, H-2B and L visas and their dependents till December 31, 2020. It also includes certain categories of J visas like an intern, trainee, teacher, camp counselor, or summer work travel programme.

Trump observed that excess labour supply is particularly harmful to workers at the margin between employment and unemployment—those who are typically "last in" during an economic expansion and "first out" during an economic contraction.  "In recent years, these workers have been disproportionately represented by historically disadvantaged groups, including African-Americans and other minorities, those without a college degree, and Americans with disabilities," he said.

Which visa types will be impacted?

Why is Trump banning the visas?

In his proclamation, Trump said that the overall unemployment rate in the United States nearly quadrupled between February and May of 2020—producing some of the most extreme unemployment rates ever recorded by the Bureau of Labor Statistics. While the May rate of 13.3 per cent reflects a marked decline from April, millions of Americans remain out of work.

The US president said that between February and April of 2020, more than 17 million jobs were lost in industries in which employers are seeking to fill worker positions tied to H-2B non-immigrant visas. "American workers compete against foreign nationals for jobs in every sector of our economy, including against millions of aliens who enter the United States to perform temporary work. Temporary workers are often accompanied by their spouses and children, many of whom also compete against American workers," Trump said.

What does H-1B mean for Indians?

H-1B allows highly skilled people to work in the US, and has been used by software companies like Tata Consultancy Services and Infosys to take skilled IT professionals from India to the US to run outsourced projects for US firms. The earnings that the Indians made through this visa regime helped pay off their education loans. While many returned, a large number used this visa to help them get green cards.

How will Indians be affected?

The new rule would apply to those who are outside the US, do not have a valid non-immigrant visa and an official travel document, other than a visa to enter the country. According to the proclamation, it does not have an impact on lawful permanent residents of the United States and foreign nationals who are spouses or child of an American citizen.

Foreign nationals seeking to enter the US to provide temporary labour or services essential to the food supply chain are also exempted from the latest proclamation.

Google CEO Sunder Pichai has expressed disappointment over the proclamation, and said he would stand with immigrants and work to expand opportunity for all. "Immigration has contributed immensely to America's economic success, making it a global leader in tech, and also Google the company it is today," Indian-American Pichai said in a tweet hours after Trump issued his proclamation in this regard.

Immigration has contributed immensely to America’s economic success, making it a global leader in tech, and also Google the company it is today. Disappointed by today’s proclamation - we’ll continue to stand with immigrants and work to expand opportunity for all.

"This is yet another attempt to reduce immigration even temporary immigration under the guise of a public health crisis," said Krish O'Mara Vignarajah, president and CEO of Lutheran Immigration and Refugee Service. "This order will shut the door on more than 1,60,000 foreign-born workers and the families they support," she added. Approximately 45,000 wives, husbands, sons, and daughters will be barred from the country how does excluding immigrant children protect American jobs, Vignarajah said.

Top American lawmakers have urged President Donald Trump to revoke the temporary suspension of H-1B and other non-immigrant visas. "I am deeply disappointed by President Trump's misguided order to suspend these key work visa programmes. I urge him to reverse this decision to help ensure our health care system and broader economy are ready to combat the next phase of (coronavirus) pandemic and to create the jobs we need for our economic recovery," Indian American Congressman Raja Krishnamoorthi said.

This is not the right approach, said Senator Democratic Whip Dick Durbin and Congressmen Bill Pascrell and Ro Khanna. "We need to mend the H-1B programme, not end it. Instead of suspending H-1B visas, the Trump administration should ask Congress to pass the H-1B and L-1 Visa Reform Act of 2020, which reforms the H-1B program with a scalpel, not a sledgehammer".