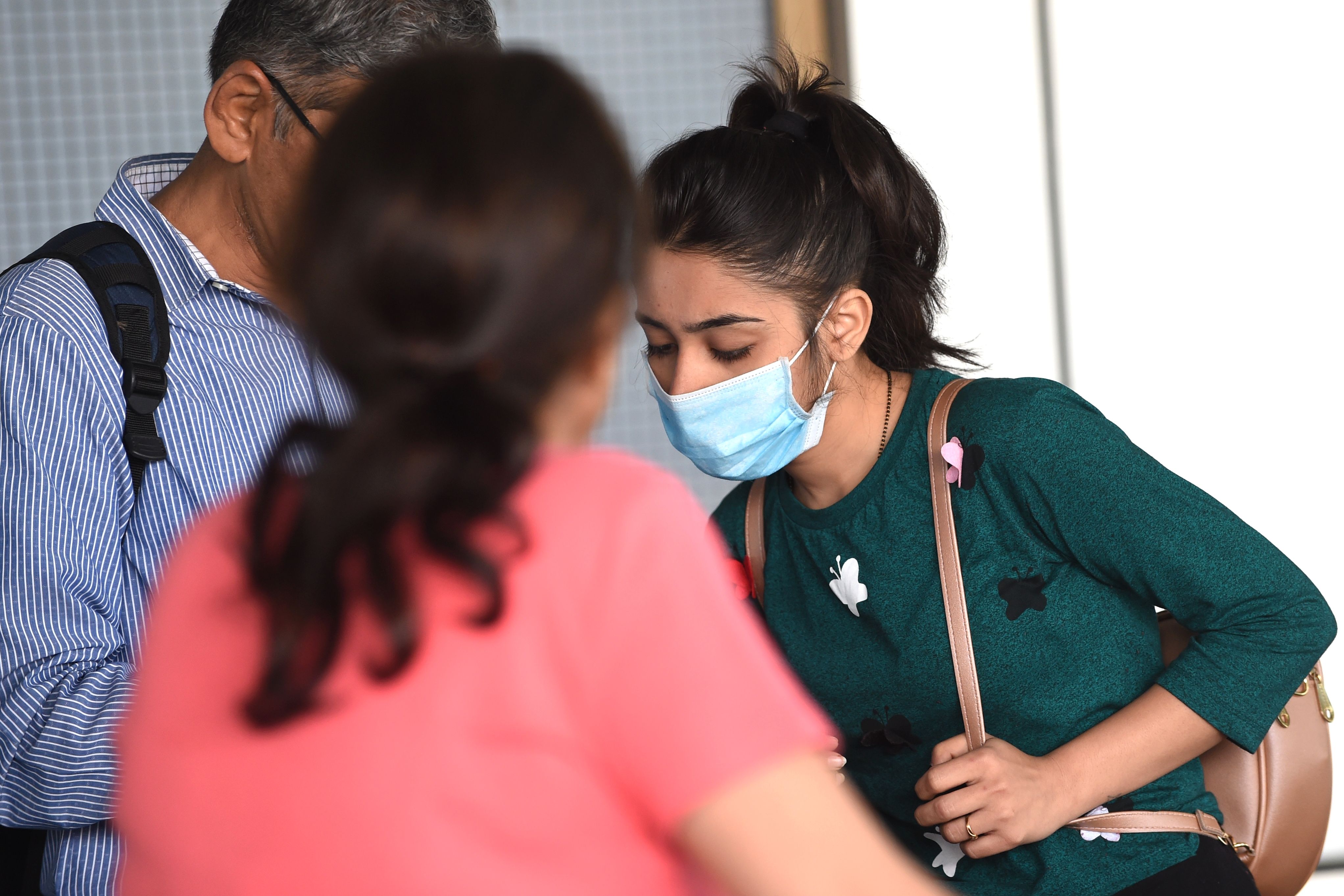 A passenger wearing a facemask as a preventive measure against the spread of the COVID-19 coronavirus outbreak, interacts with her relatives upon her arrival at the Sardar Vallabhbhai Patel international airport in Ahmedabad on March 4, 2020. - India confirmed three cases in late January and early February, all of whom arrived from China and who have since recovered. But until last week no more infections were reported when an Indian man who returned from Italy via Austria to New Delhi tested positive. (Photo by SAM PANTHAKY / AFP)

Indian stock markets ended lower on Wednesday, with shares of airlines, hotels and multiplexes in particular taking a big knock as the number of coronavirus cases in India rose to 28. The virus outbreak is expected to hurt travel and tourism at least in the short-term as people cancel holidays and businesses impose travel restrictions on employees.

Over the last few weeks, COVID-19 cases have surged in several countries, even as cases in China started to reduce. Until this week, India had been largely spared from the outbreak, barring three cases in Kerala, who had recovered. Two more positive cases were reported earlier this week, and on Wednesday, the number jumped to 28, including 16 Italian tourists in Jaipur. This has got investors worried.

Among the stocks that saw huge sell-off, Indian Railway Catering and Tourism Corp (IRCTC), derailed 10 per cent, SpiceJet and Indigo crashed 4.6 per cent and 2.6 per cent respectively and multiplex operator PVR tumbled 6 per cent.

Hotels operators too were hit hard, with Indian Hotels, which operates the Taj Group of Hotels, declining 6 per cent, Lemon Tree Hotels falling over 7 per cent and luxury hotel operator EIH closing 3 per cent lower.

“India, which had so far remained largely unaffected, started witnessing many rising cases of coronavirus, which dampened investor sentiments. The spread of the virus can have significant impact on the domestic consumption-driven economy, which is already under significant pressure. In fact, this event has introduced additional downside risks to our earnings estimates for FY21,” said Siddhartha Khemka, head of retail research at Motilal Oswal Financial Services.

Indigo and SpiceJet among other airlines had already suspended their flights to China in the wake of the coronavirus outbreak. The concern is that if the virus spreads rapidly in India, domestic demand could take a knock too. Its a similar case with hotels.

“What we were hearing from airlines stakeholders is that while international travel is going to be impacted, they are going to utilise those additional planes to have inbound domestic travel. Lot of tourist peak season will also get diverted to places in India. But, given that the number of confirmed cases in India is also rising, domestic travel could also get impacted,” Hetal Gandhi, director at CRISIL Research told THE WEEK.

Ratings agency ICRA had recently warned that Indian aviation industry could see international traffic growth fall by 20.2 per cent to 24.7 per cent if there was a complete suspension of flights from South East Asian countries.

“This is negative for Indian aviation industry, which is already reeling from from significant passenger traffic slowdown, with the international traffic growth for nine months FY2020 having witnessed a decline of 8.4 per cent,” it said.

The Organisation of Economic Cooperation and Development (OECD) expects world real GDP growth to fall to 2.4 per cent in 2020 from 2.9 per cent in 2019. India’s GDP in the financial year 2021 is seen at 5.1 per cent, only marginally higher than the 4.9 per cent growth expected this year.