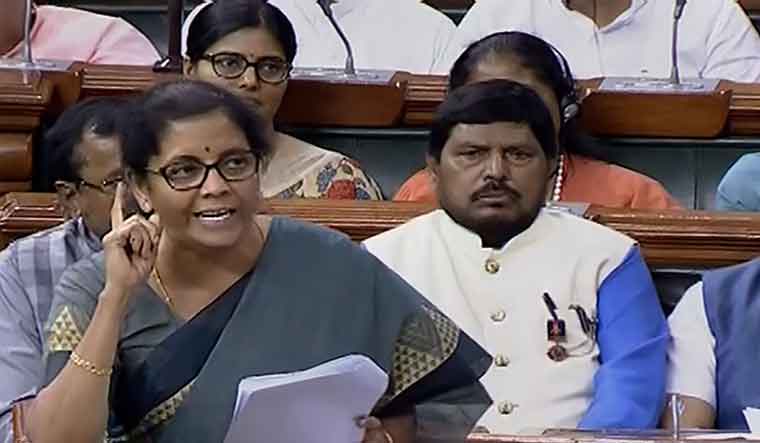 The government is committed to the path of fiscal consolidation without compromising on public expenditure, Finance Minister Nirmala Sitharaman told the Lok Sabha on Wednesday.

She said several steps, including enhancing investments in infrastructure, liberalisation in the foreign direct investment policy and lowering of corporate tax are being taken to make India a $5-trillion economy by 2024-25 as stated by Prime Minister Narendra Modi. The minister was replying to a general discussion on the Union budget 2019-20.

Several opposition parties led by Congress walked out of the House demanding a roll back of cess on petrol and diesel proposed in the budget and shouting slogans saying it was an anti-people budget. Besides Congress, DMK, TMC, NC, and NCP walked out during the minister's reply.

Sitharaman had on Friday proposed to raise excise duty and road and infrastructure cess on petrol and diesel by Rs 2 per litre each to raise Rs 24,000-28,000 crore on an annual basis. "The government is committed to the path of fiscal consolidation without compromising on the public expenditure placed by the various sectors," she said.

The minister said the fiscal deficit in the regular budget for 2019-20 has been pegged at 3.3 per cent of the GDP as against 3.4 per cent proposed in the interim budget presented in the house in February.

Sitharaman further said all the data mentioned in the budget is authentic. "I will assure the house there is no need for any speculation on figures given in budget and every number is authentic," she said.

The minister said economic growth and national security would be the focus of the government. She said support amount for all schemes which have implications for common man has been increased. "We will move GST Council to reduce the GST rate on e-vehicles from 12 per cent to 5 per cent," she said adding, "We will work with states for supplying tap water to all in rural household by 2024".

The minister said the government's intention is to push infrastructure development and invest over Rs 100 lakh crore in the next five years. She said the government has increased Minimum Support Price (MSP) for all 22 commodities.

Sitharaman further said the budget reflects the mandate of the newly elected government and towards acheiving the $5-trillion economy. To boost investments, a five-member committee headed by the prime minister has been set up, she said.

Referring to questions raised on discrepancies of data between the budget and the Economic Survey, she said the budget has taken into account 12 per cent growth in nominal GDP. She said although the survey has projected a nominal GDP growth of 11 per cent in 2019-20, but the actual size of nominal GDP is same.

To opposition queries, she said the finance ministry has taken into account 12 per cent nominal GDP growth to ensure compatibility with the projections made in the interim budget. When some members objected to her statement, she said: "Even if I am mocked at, sometimes I spoke like a teacher to a class of students...And even if that is not sufficient I am quite happy to receive Members to room number 36 with due respect," the Finance Minister said.

Her remarks evoked sharp reaction from the oppostion benches on which Lok Sabha Speaker Om Birla said he would look into the records and remove objectionable content.

On problems being faced by the banking sector, she said the governnment is addressing them through four 'R' strategy. These are recognition of NPAs, recovery of bad loans, recapitalisation of public sector banks, and reforms.

She further said that Insolvency and Bankruptcy Code would change the credit culture in the country and help in resolving the NPA problem in a holistic manner.