Initiating 5G among 100-day priorities of the government, says the minister 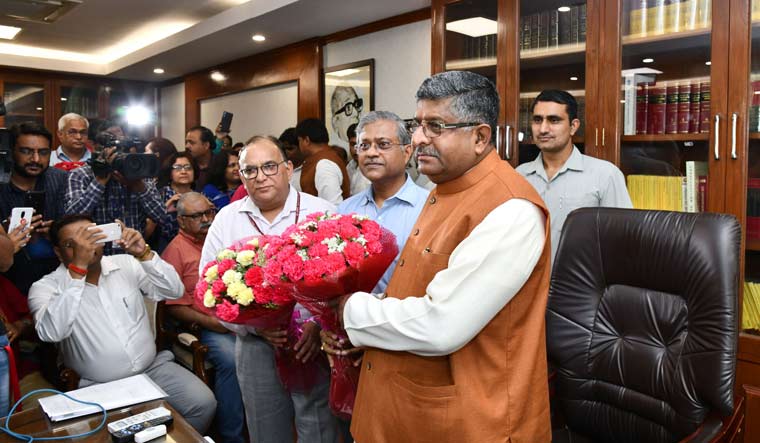 The new Modi government is keen to make 5G a 100-day reality. To bring in the new super high-speed data network in the country, the department of telecommunications will auction fifth generation or 5G bands in the current calendar year, Ravi Shankar Prasad said after taking charge as the telecom minister on Monday.

"The government will initiate 5G on priority. By the end of this calendar year, we should auction. We have adequate spectrum," Prasad told reporters.

The government's decision to auction the 5G spectrum assumes significance as these auctions are seen to garner huge revenues for the government. Telcos, however, had expressed that they are already under debt stress owing to very high spectrum prices.

During the last spectrum auction held in 2016-17 for 2G, 3G and 4G spectrum bands had earned the government about Rs 65,789 crore in revenue from telcos. The government had put under the hammer spectrum of about Rs 5.63 lakh crore, most of which remained unsold.

"A number of consultations have already been held with the government. A plan for a rollout for 5G technology has also been discussed with telcos by the expert committee for 5G under the DoT. All that is needed now is adequate policy signals to make the rollout faster," said Rajan S. Mathews, director general of Cell Operators Association of India (COAI).

In August last year, the Telecom Regulatory Authority of India (TRAI) recommended auctioning of 20MHz blocks in the 3,300-3,600MHz spectrum band, the airwaves earmarked for 5G, at Rs 492 crore per MHz, nearly four times the price prevailing for the band in other Southeast Asian economies like South Korea, an industry report said.

The ultra high-speed data network which enables machine-to-machine communications is only starting to be rolled out in the US and is delayed by a year. The 5G technology was commercially rolled out in South Korea last year, making it the first country in the world to have the technology.

Along with the spectrum auction, the government is also keen to follow on with its earlier plan of holding 5G trails along with telecom technology multinationals. “Trials for 5G technology will begin in 100 days...It shall be our endeavour that 5G is used for deprived sectors and social causes as well," Prasad said.

Prasad said that the government also aims to roll out five lakh public WiFi hotspots on a priority basis. Expediting domestic manufacturing of telecom equipment and creating a Broadband Readiness Index to rank states will be other focus areas for the DoT during the next three months.

"It is a complex question. It involves not just technology aspects but also the security aspects, that need to be considered," the minister said. Government after initial objections had earlier allowed Huawei to participate in the 5G trials along with Ericsson, Nokia, and Samsung.