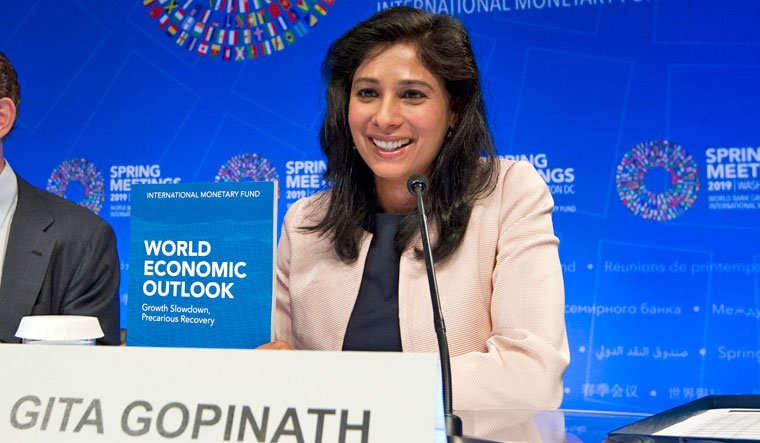 Chief Economist and Director of Research Department at the IMF Gita Gopinath speaks during a news conference at the World Bank/IMF Spring Meetings, in Washington, on Tuesday | AP

Describing current global economic atmosphere as "a delicate moment", IMF chief economist Gita Gopinath on Tuesday said that while the global economy continues to grow at a reasonable rate and a global recession is not in the baseline projections, there are many downside risks.

Beyond 2020, global growth is expected to stabilise at around 3 per cent, bolstered mainly by growth in China and India and their increasing weights in world income, she said in a blog post ahead of the annual spring meeting of the International Monetary Fund and the World Bank.

Growth in emerging market and developing economies will stabilize at five per cent, though with considerable variance as emerging Asia continues to grow faster than other regions.

A similar pattern holds for low-income countries with some, particularly commodity importers, growing rapidly but others falling further behind the advanced world in per capita terms, the Indian-American economist said.

"While the global economy continues to grow at a reasonable rate and a global recession is not in the baseline projections, there are many downside risks," Gopinath said.

Tensions in trade policy could flare up again and play out in other areas (such as the auto industry), with large disruptions to global supply chains, she cautioned.

Growth in systemic economies such as the euro area and China may surprise on the downside, and the risks surrounding Brexit remain heightened.

"A deterioration in market sentiment could rapidly tighten financing conditions in an environment of large private and public sector debt in many countries, including sovereign-bank doom loop risks," Gopinath warned.

Given these risks, she argued, it is imperative that costly policy mistakes are avoided. Policymakers need to work cooperatively to help ensure that policy uncertainty doesn't weaken investment, she said.

Fiscal policy will need to manage trade-offs between supporting demand, protecting social spending, and ensuring that public debt remains on a sustainable path, with the optimal mix depending on country-specific circumstances.

"Financial sector policies must address vulnerabilities proactively by deploying macroprudential tools (such as counter-cyclical capital buffers) - a task made more urgent by the possibility that interest rates will remain low for longer. Monetary policy should remain data dependent, be well communicated, and ensure that inflation expectations remain anchored," she said.

Across all economies, the imperative is to take actions that boost potential output, improve inclusiveness, and strengthen resilience, the top IMF economist said.

"There is a need for greater multilateral cooperation to resolve trade conflicts, to address climate change and risks from cybersecurity, and to improve the effectiveness of international taxation," she said.

"This is a delicate moment for the global economy. If the downside risks do not materialize and the policy support put in place is effective, global growth should rebound," Gopinath said.

"If, however, any of the major risks materialize, then the expected recoveries in stressed economies, export-dependent economies, and highly-indebted economies may be derailed. In that case, policymakers will need to adjust," she added.