Budget 2019: Goyal says EPFO membership has risen, but where are the jobs? 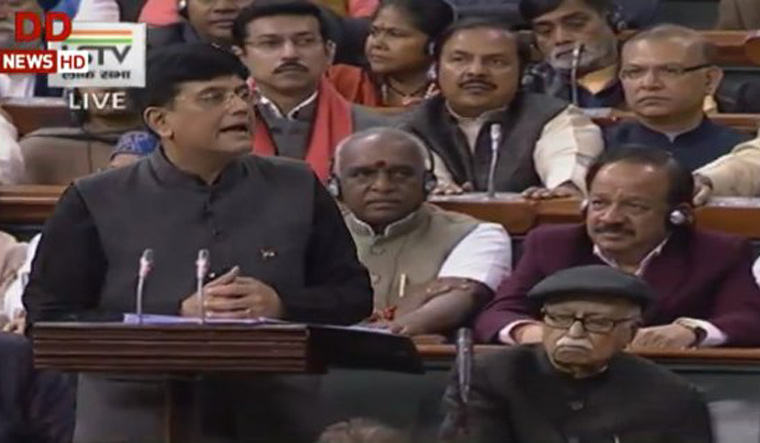 The please-all, woo-all interim budget presented by Finance Minister Piyush Goyal witnessed the government patting itself on the back for major schemes, from dealing with black money to Ujwala Yojana to MUDRA and Jan Dhan. But, it was hard-pressed to talk of the achievements on the job creation front. It is not necessary that this be a part of the finance minister's budget speech, but given they had touched upon everything else they undertook to achieve, one would have expected the minister to highlight specific areas in which they created jobs, and how many.

The failure in job creation by this government, particularly in proportion to what PM Modi promised as he criss-crossed the country campaigning in the heat of the 2014 summer, is one issue that may work against it in the next few weeks. High growth is spoken in the same breath as jobless growth. While the only credible figures of jobs created in the last four years flows from the payments made under the UPA government's flagship Mahatma Gandhi National Rural Employment Guarantee (MNREGA) Act, a report said the joblessness rate at 6.1 per cent was the highest in 45 years. The data has always been contentious, unreliable and contradictory. Ironically, the government has often used the absence of data as a fig leaf and cried that the problem is not of joblessness but absence of data on jobs.

When surveys after independent surveys showed the magnitude of the issue, the government expected the employment figures adduced by the Labour Bureau to be the last word on it. But, the Labour Bureau's figures added fodder to the debate when pro-Modi economists stepped in saying the figures of new enrolment showed by the Employment Provident Fund Organisation (EPFO) would clinch it.

The EPFO's pre-demonetisation figures showed no new membership. But, after the demonetisation—which had hit millions of jobs, particularly in small towns and the countryside—the numbers miraculously rose. On careful analysis, it was found that when a unit with 18 employees added 2 more and came under the EPFO, it was shown as 20 new jobs—the reality was only two more.

There were a few references to jobs. Talking about the booming civil aviation sector in the context of the government's UDAN scheme, the minister pointed out that “when there is such a high growth, there will be a job growth”. Just the opposite of the nationwide discourse on jobless growth. The finance minister also harked back to the pre-poll rhetoric of the BJP, when party leaders said they would galvanise entrepreneurship by converting employment seekers into job givers. “The concept of employment is changing all over the world. With job seekers becoming job creators, India has become the world’s second largest start-up hub. We are proud of the hard work and innovative ideas of our youth,” the minister said, referring to the government's skill development programme, as well as the MUDRA, Startup India and Stand-Up India, and said youth power is being harnessed through these self-employment schemes.

But that does not mean the end of public sector jobs. The railways, he said, “will give an impetus to the Make in India programme and create jobs through major leap in technology wholly developed by our engineers.” The solar energy sector was counted for the “lakhs of new age jobs” it is creating. The Common Services Centre under Digital India programme employed 12 lakhs. As he unveiled what his budget had for the entertainment industry, the finance minister first described it as a job generator.

Former finance minister Yashwant Sinha described the job scenario numerically in a December 2018 column. "In the last few years, 25 lakh young Indians appeared for a competitive exam for 6,000 Group D jobs in West Bengal government; 12,453 applied for 18 vacancies for the job of a peon in the Rajasthan government, and 2.8 crore applies for 90,000 vacancies for train drivers and trackmen in the Indian Railways". The applicants were engineers, chartered accounts and lawyers, among other post graduates.

The incumbent finance minister has tried to tell the millions of educated unemployed where they all may hope to find jobs. There was little to galvanise the industry into expanding, stepping up production, though there is going to be enough market with lots of money going around.