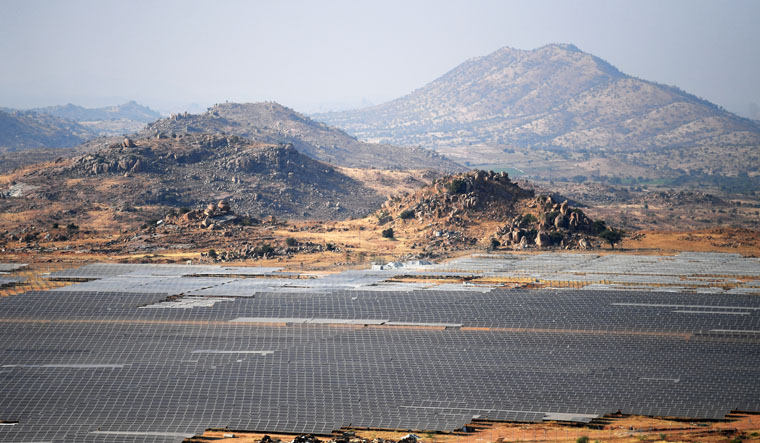 According to global energy adviser, International Energy Alliance (IEA), nearly 40 per cent of the world's energy needs would be fulfilled by renewable energy sources by 2023. An IEA study also suggests that the share of renewables in India's energy sector would rise to 16 per cent from the present 5.3 per cent over the next five years.

The Paris-based agency released its much awaited World Energy Outlook, 2018, in New Delhi on Tuesday. The IEA observes the energy demand to grow by more than 25 per cent till 2040. Much of this growth would be driven by developing nations such as India.

According to the IEA report, there will be an annual investment of more than $2 trillion in new energy supply, till 2023. "So far investments in renewable energy in India is being led by solar. India now has the second highest growing market of solar photovoltaics," said Cédric Philibert, senior analyst, renewable energy division, IEA.

“We see India's share of renewable energy rise consistently from here at 5.3 per cent to about 16 per cent of the total energy consumption in the country,” said Philibert, speaking at the launch of the 660-page Global Energy Outlook report.

“India still remains well behind China in solar manufacturing, but the capacity of producing solar PV panels have quadrupled in the last three years,” said Philibert. The agency views India to have set the right path for itself, under the leadership of Prime Minister Narendra Modi.

The report underlines that China remains the global growth leader in renewable energy largely for its policies to decarbonise all sectors and reduce harmful local air pollution. By 2023, China will become the largest consumer of renewable energy, surpassing the European Union.

Among the world’s largest energy consumers, Brazil has the highest share of renewables by far—almost 45 per cent of total final energy consumption in 2023, and is likely to be driven by the significant contribution of bioenergy and hydropower.

The IEA forecast said that expansion of solar PV capacity globally would be almost 600GW by 2023 (from the 2017 level of 391GW). Of this, almost 40 per cent of manufacturing capacity lies with China.

Wind energy remains the second-largest contributor to renewable capacity growth, though in absolute terms, hydropower remains the largest renewable electricity source for the planet till 2023, the IEA global forecast said.

"We are fairly confident that India will be able to wow the world by fulfilling all our renewable energy targets in time. The government is focussed to achieve this and all new renewable energy sources are also being explored by us," Chintan Shah, director (technical), Indian Renewable Energy Development Agency (IREDA) said.

IREDA is a major funding agency for all renewable energy projects in the country. “As the IEA report said, we are focussing on producing more of bio-energy and not just electric power from renewable energy,” Shah told THE WEEK, sharing that the government is keen to exploit bio-gas and bio-CNG as clean fuel options and is finalising schemes to incentivise the production of these shortly.