Srinivasan is the author of 'The Right to Sex: Feminism in the 21st Century' 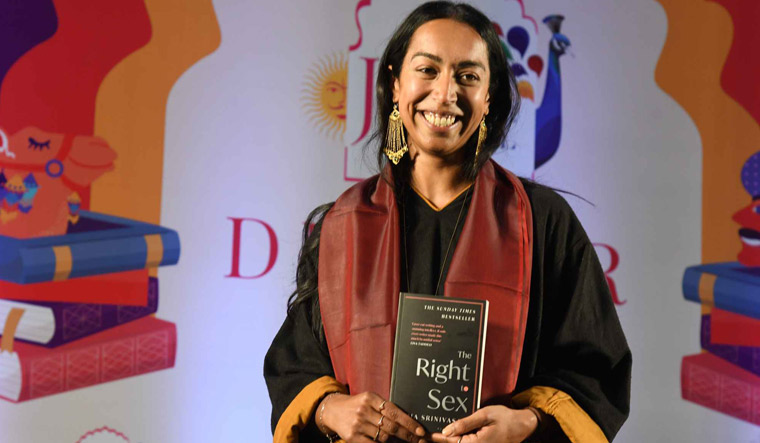 In 2021, Oxford professor Amia Srinivasan came out with her seminal work – a collection of essays called 'The Right to Sex: Feminism in the 21st Century' – and decimated all our ideas of what sex should be or who you should be having it with. Your sexual desires, she posited, are not just personal, but they are moulded by societal forces. In other words, we are conditioned to like whom we like. Incisive and scholarly, the essays probed the changes after #MeToo and the issue of consent, gender diversity and trans rights, pornography, and sex positivity. The book took the world by storm. It was shortlisted for the Orwell Prize for Political Writing and was named as Blackwell’s Best Book of the Year, along with winning a host of other awards.

“These essays are works of both criticism and imagination,” praised The New York Times, in its review of 'The Right to Sex'. “Srinivasan refuses to resort to straw men; she will lay out even the most specious argument clearly and carefully, demonstrating its emotional power, even if her ultimate intention is to dismantle it.”

Most of the essays arose from discussions she had with her students at Oxford. Their take on some of the issues, such as pornography, were surprising, she said in a session at the Jaipur Literature Festival.

“I did not think my students were going to find this very interesting,” she said. “It is quite quaint, the idea of feminists arguing about whether pornography should exist or be made available, especially when porn meant going to seedy film theatres or (flipping through) graphic magazines. It is extremely outdated in this era of totally ubiquitous online pornography, to which they had all been exposed since a young age. But I was really struck by how responsive they were to these anti-porn polemics from the 1970s. They were struck by the idea that pornography has this pedagogic function where it teaches you what is important and sexually exciting. It propagates the idea that a certain dynamic of male domination and female submission is what is erotically and sexually charged. (Basically), it teaches them how to have sex. Many of my students agreed with this in a way that I found extremely disturbing.”

Srinivasan, 38, was born in Bahrain and later lived in Taiwan, Singapore, New York and London. She did her undergraduate degree in philosophy from Yale and then, a BPhil and DPhil as a Rhodes Scholar at Oxford. In October 2018, she joined St John’s College, Oxford, as a tutorial fellow in philosophy and in January 2020, she took over as the Chichele Professor of Social and Political Theory at All Souls College, Oxford, the first woman and person of colour to do so.

Most of us are so streamlined into thinking a certain way about sex and gender that we often don’t question why we think the way we do, says Srinivasan. Take the example of trans rights. “I think it is important to sometimes hear what the critics and opponents of the trans rights movements are saying,” she said. “Often, what they expressing is that they are deeply anxious about their own sense of identity, gender and sexuality,” she said. “It is a profound threat to their sense of self as just straightforward men or women. As British academic Jacqueline Rose put it, ‘All of us are literally haunted in our dreams by other genders and sexual possibilities for ourselves. We are haunted by the female, male or hermaphrodite versions of ourselves. And that has to be repressed so that we can go through the social and political world that insists on us being cleanly woman or cleanly man’.”

The politics of sex is not the only thing that this erudite professor is interested in. From Bulgarian folk music to octopuses, death and philosophy, there is much to keep her occupied. However, perhaps her name will go down in history as the one who dislodged one of the most potent myths about love: that the heart wants what it wants.