Kochi-Muziris Biennale 2022: A celebration of resistance

The youngest artist this year is 28-year-old Pranay Dutta 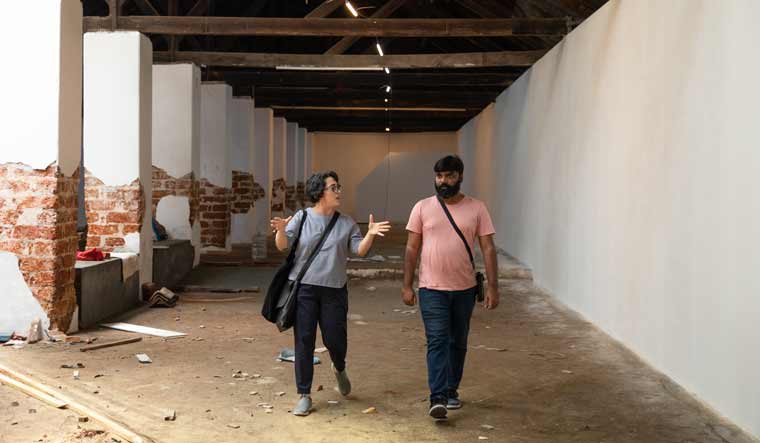 Shubigi Rao and Mario D’Souza during a site visit, ahead of the Kochi-Muziris Biennale

The buzz is back. As you walk into Aspinwall House, the primary venue of the Kochi-Muziris Biennale (KMB), there is constructive chaos—labourers walking hither thither, trying to bring artists’ vision to life; art mediators deep in thought or in conversation with the artists; landscape workers in action. The KMB, which was delayed by over a year due to the pandemic, will begin on December 12. The event will be inaugurated by CM Pinarayi Vijayan.

“The theme for the Biennale curated by Singapore-born Indian artist Shubigi Rao is ‘In our veins flow ink and fire’, says Mario D’Souza, co-curator and director of programmes. “It is a celebration of an honouring of sorts, of artists’ responses to social and political situations around the world—be it of resistance and erasure, in their own context.”

He adds: “This year we have a contingent of artists from Asia, Africa and Latin America—countries with whom we share a colonial history. We wanted to build an affinity with them, learn from each other’s contexts and make different types of excesses and injustices visible—be it through art or protest.”

The Goa-born writer, artist and curator goes on to talk about how the artists were originally invited in 2019, but the event got cancelled and so, somewhere, a different meaning was accrued to the work. Among artists to watch out for, he says, there is “Zhanna Kadyrova, an artist from Ukraine who fled Kyiv when Russia invaded. She has used bread (a kind called palyanitsya) as a symbol for differentiating between the enemy and their own. Kadyrova’s work would be an installation of a rock collected from the bed of a Ukrainian river, sliced as bread and placed on the table as a sign of hospitality.”

“Then we have Sahil Naik, who is talking about history the state didn’t think important to preserve,” adds D’Souza. His installation talks about a dam that was built when Goa was liberated, in 1961. When the dam was complete, the houses right under it, in one of Goa’s oldest villages—Curdi—were submerged. In 1970, however, the village re-emerged. Since then, each summer, the villagers return to the ruins and sing to the landscape.

The youngest artist this year is 28-year-old Pranay Dutta, who is using a video game to show how water would be used as currency in the future. D’Souza also talks of Joan Jonas, a New York-based performance artist who is bringing an artwork, the ideation of which was birthed in Kochi in 2016.

Talking of sustainability, D’Souza says, “It is a given that with the climate conditions here at Fort Kochi, the materials used by artists will be sustainable and recyclable.”

Talking about sustaining as an artist, D’Souza says it is always tough. “But, having said that we are grateful to the government of Kerala for all the support. Things are looking up—there are plans for artists' residencies and seminars in the pipeline; then there are artists supporting artists and so on. Fundraising models have improved too,” he adds.