From the archive: Wilbur Smith said his first book was rejected 20 times 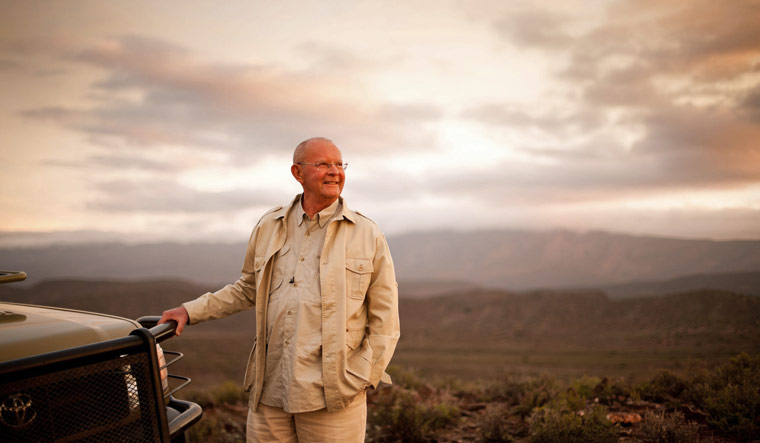 This story was originally published in THE WEEK issue dated January 1, 2012

I have autographed books written by Freddie [Frederick] Forsyth and Lord [Jeffrey] Archer," said Wilbur Smith with an impish grin, as he signed a copy of his latest book, Those In Peril. The first happened at a book signing at the old Doubleday bookstore on New York's Fifth Avenue. "At the huge store, I was sent to the third floor," he said. "And there it was—a desk, around 300 of my books and not a soul to buy them! I waited, sharpened my pencils, and then walked around. "Suddenly, I saw a man across the room, signing books at a furious pace. And, there was not a buyer there, either. I asked, 'Sir, I'm intrigued. Whom are you signing these for?' He said: 'Well, if I write in a book, the store cannot return it to my publisher, and I'll get my royalties.' Light dawned! I ran back to my desk and signed all 300 books so fast that my pen was smoking at the end of it! Then I got up and looked around and found a display of Forsyth's books. Now, Freddie is a good man, and a friend of mine. So, I did him a favour. I signed all his books as well."

The Archer signing happened at a department store in Sydney, Australia. The woman had driven five hours to get there, and the book was for her husband's 50th birthday. Smith said: "The book's title was Not A Penny More, Not A Penny Less. "I said, 'Ma'am, I'm sorry, but I cannot sign this'. 'You are Jeffrey Archer, aren't you?' she asked. I said no; he was coming the next week. She said, 'Sign it'. I was reluctant. 'SIGN IT', she said. So, I signed it: 'In the absence of Lord Archer, Wilbur Smith'." But don't fall for his self-effacing jokes. His website says he has sold enough books to fill the Wembley Stadium twice over. Each of his novels averages three million copies. His novels have never been out of print.

Lee Marvin (Shout At The Devil) and Roger Moore (Gold Mine) have acted in adaptations of his novels. In 2014, he will be celebrating his 50th year with publisher Pan Macmillan. As an African saying goes, "If you drink Zambezi waters with your mother's milk, Africa will forever run in your veins." Another option is to read Smith; any one of his 33 novels. My first one was River God, bought, under the watchful eyes of a girlfriend, from a book festival at Thirunakkara Maidanam, Kottayam. The girlfriend is long gone, and the maidanam has changed shape. But River God and its 32 siblings remain in my library, my share of the 120 million Smiths sold in 26 languages.

I met Smith during the Landmark Wilbur Smith Tour in Bangalore. When he walked into the room at the Taj West End, it was hard to believe that he was 78—boyish grin, greying hair cropped close, white shirt with thin, sky blue stripes, gold cufflinks, Rolex, blue D&G jeans and sneakers.

A 'friendship' built over 33 books is a long one. So, there were things that he never had to tell me. Like the slight limp, polio. That he was an accountant in Her Majesty's Inland Revenue Service. That he has been married four times the first two ended in divorces, and the third wife, novelist Danielle Thomas, died of cancer. His current wife is 39 years his junior— Mokhiniso 'Niso' Rakhimova, a Tajik with a law degree from Moscow.

At a WH. Smith bookshop in London, he found her among the Grishams and gently steered her to his display. Elsewhere Smith has said that he is a better writer than a father. He has four children—sons Shaun and Lawrence, daughter Christian and stepson Dr Dieter Schmidt, Danielle's son from her first marriage. He was out of touch with all of them and then recently, after Niso insisted, contacted Shaun, an SAS soldierturned- businessman. Dieter and Smith publicly fell out after Danielle died.

Dieter accused him of leading a double life under the pseudonym Steven Bisset Lawrence. He said in court that for many years Smith had paid royalties to an offshore company for which Lawrence held the power of attorney. The final outcome of the case is not known to this reporter. Smith has been fairly frank about the fact that he does count the number of days he spends in his homes to save tax as a non- resident.

Nothing wrong there; many famous, not so famous and infamous Indians do it all the time. Smith has a house in London, a chalet in Davos, Switzerland, and the three-acre 'Sunbird Hill' in Cape Town. He had a beautiful 22-acre property, Cap Colibri, in the Seychelles. He sold it because Niso is allergic to coral. Cap Colibri is close to Bel Ombre beach on Mahe island, where pirate Olivier Levasseur aka La Buse (The Buzzard) supposedly cached his treasure.

He was reportedly R.L. Stevenson's inspiration for Treasure Island. So, Those In Peril has pirates and new age treasure. There is Hazel Bannock of Bannock Oil Corp, her daughter Cayla and Hector Cross of Cross Bow Security. Cayla is kidnapped by pirates and Cross goes after them. There is intrigue, doublecrossing, a supertanker, raunchy sex and a happy ending. And there are Berettas. Smith and Niso took a tour of Beretta's Italian plant last year. It helped that Ugo Beretta is a close friend. And, Smith believes that no one makes better shotguns than the Berettas.

Those who closely follow Smith know that he leaves personal links in his characters. For example, La Buse, at least in name, makes an appearance in Birds Of Prey; a wily Scottish captain Angus, Lord Cumbrae, is otherwise known as The Buzzard. Smith was born in Broken Hill, Northern Rhodesia, now Zimbabwe, and Tungata Zebiwe (The Leopard Hunts In Darkness) resembles Joshua Nkomo, founder of the Zimbabwe African People's Union.

Moonfish makes an appearance in The Quest; in Tajiki, Mokhiniso means 'moonfish'. So, isn't there a lot of him in his characters? "I accept that accusation," said Smith wryly. "You cannot write in a vacuum. Characters come from people whom you have interreacted with. I would rather say my characters are a soupspoon of me and a lot of wishful thinking." Many of Smith's characters are collectors, like the netsuke collector in Elephant Song.

The man himself is a collector of books, Egyptian artifacts, Rolexes and firearms. "The prize of my watch collection is a platinum 'Roger Federer' Rolex gifted by my wife," said Smith. "Then there is my father's Rolex from the 1940s. Among my guns, there are two that are interesting. A .416 Rigby built specially for a Kenyan safari company in 1934, a year after I was born. Then there is a Queen's Silver Jubilee edition .375 Holland & Holland Magnum rifle. It is one of five produced by them. It is numbered and has the jubilee crest on it. Actually, it is supposed to be an exhibition piece. But mine is quite well used. I've shot over 40 buffalo with it."

The Rigby made an appearance in The Seventh Scroll. Smith shot his first lion in 1947. His parents were vacationing and the 14-year-old was alone at home when a pride of lions tore into their livestock. With his father's .318, which was offlimits for him, he shot three lions with as many bullets. He has freely admitted that his father, Herbert James Smith, was the template from which he fashioned his 'great white hunters'. Later, Smith did turn conservationist. He bought sheep farms in the Karoo and fenced them into one 26,000-acre reserve, where he introduced eland, gemsbok, springbok and other indigenous species. He sold the reserve to a friend, but visits and hunts there often. Smith's introduction to India was through the writings of Corbett, Kipling and even R.K. Narayan.

He said that unless conservationists Helpmate, playmate, soulmate: Smith with wife Niso appeal to human nature, the human versus wildlife conflict in India might continue. In post-independence Africa, he said, people were trying to raise cattle on the same grass that the gazelle was eating. This led to conflict. Then, the government told tribal chiefs that they would get 50 per cent of the fee from every hunting licence. But the money must be invested in schools, clinics, wells and soon. "Today, if anyone poaches, his fellow tribesmen turn him in," said Smith. "India has a strong hunting tradition and lots of rich Indians still do come to East Africa to shoot game. Today, to shoot a lion in Botswana, you have to pay $3,00,000. An elephant too comes at around the same price. You say there are no animals in India. In Botswana alone there are a 1,40,000 head of elephant, while the ground can only support 60,000 or so!"

Paintings and painters make an appearance in many of Smith's novels. The inspiration is undoubtedly his mother, Elfreda Lawrence Smith, who died three years ago at the age of 92. Smith's chalet n Davos is entirely decorated with her watercolours. He has around 200 of them. His favourite? "She did one of me as a small boy walking along the beach, at sunset, with my fishing rod and bait-box," he said. "She has painted every house that I ever had."

On the desk in his study, he keeps a small wooden box with her ashes. On a working day, Smith gets up at around 5:30 a.m., goes through his morning routine, has breakfast and writes from around 8 a.m. to 3 p.m. "Then we go for walks or go fishing," he said. "Sometimes we have a barbecue in the evening." He has professed his weakness for crayfish and Cape red wine. He also loves a young springbok steak, rare with lots of garlic, and a side dish of pasta. He hits the sack by 10 p.m.

In between books the Smiths travel—fishing in Alaska, Iceland or Russia, pheasant hunting in Argentina and so on. His biggest fish was a 1,112-pound marlin hooked off the Great Barrier Reef, Australia. He took six hours to bring it in, and the behemoth measured 14ft from the tip of the sword to the tail. After being close to so many animals, he has chosen a little one for his personal crest—the sunbird.

Yes, The Sunbird is one of his more popular books, but there is more to it. His Cape Town house borders the Kirstenbosch national botanical gardens, and many a day sunbirds come to his garden looking for nectar. "I believe good things happen to me when these green, iridescent visitors come calling," said Smith. But still, why the sunbird? Coleridge, perhaps, has the answer: "He prays well, who loves well/ Both man and bird and beast./He prays best, who loves best/ All things both great and small." •