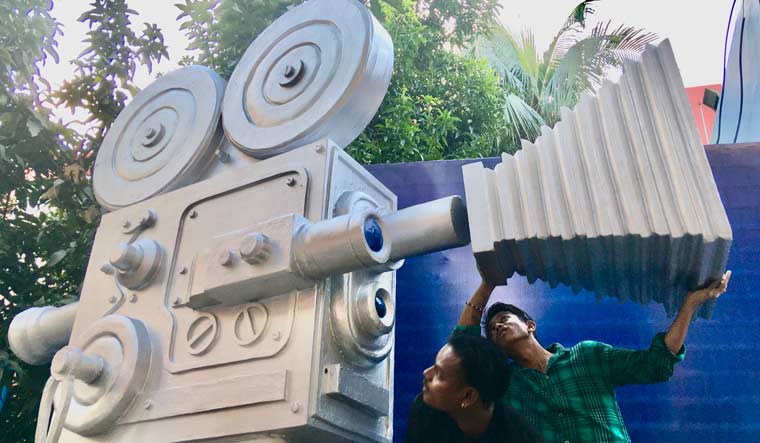 The farmer’s agitation has gone for long enough to get the country’s dream factory working at full throttle. Here they come with a crop of films in which vintage cinema gets a contemporary flavour.

It’s the ageless story re-told one more time. Twin brothers are lost in a mela after one of them wriggles free and dashes off towards the festooned Ferris wheel, only to get carried away by the throng. The distraught parents can do nothing but console themselves by lavishing all their attention on the son they are left with, and moulding him into a fine, upstanding farmer. The missing son falls into questionable company and grows up to become a politician’s apprentice. Deep in their souls, each twin knows that he has a brother but never do the twain meet until one day confrontation brings them face to face across the barricades at Singhu. The farmers raise the popular slogan ‘Kanoon wapsi nahi to ghar wapsi nahi.’ Sham sings the line in a soulful melody all his own. Swinging his truncheon above his head, Ram is about to bring it down with a thump on Sham’s rump when he stops short. Wait! A sepia memory sharpens into focus. The song is based on the tune of his mother’s lullaby. Could it be…? Is it possible…? Ram looks at farmer, farmer looks at Ram in wild surmise. Lathi and sickle clatter by their sides, and issues that were pending for months are resolved in minutes as the brothers bond. In the film’s final fadeout, the lullaby soothes the agitators into restful slumber.

What the world thinks today, Bimal Roy thought of yesterday or to be precise in 1953. With Do Bigha Zameen, he gave Balraj Sahni an enduring place in Indian filmdom’s hall of fame. We wept as the marginal farmer-turned-rickshaw puller wages a heroic struggle against many-headed evil. In the film’s newly re-loaded version, there is no place for weeping for with the Green Revolution done and dusted, it’s time for the ‘Mean Revolution’ where the farmer thinks only of the Minimum Support Price. Naseeruddin Shah is a Dabbang farmer on steroids. No rickshaw puller he, Shah rides a tractor and puts it to devastating use. Under its wheel come them all–crony capitalism, scrawny socialism, corny materialism and a pack of other isms that the farmers have had enough of. But what he doesn’t know is that there is an international conspiracy–some say ‘galactic gathbandhan’–out to get him. In the film’s climactic scene, sinister forces throw the national flag in his way. The conspiracy of course is to frame the farmer as an angsty national. He nearly falls into the trap but manages to apply the brakes just in time. Proudly holding flag, family and fervour high, the tractor fades into the sunset. Applause.

This film directed by Vidhu Vinod Chopra was universally liked when it hit the screens in 2009. A decade later, Chopra adds drama to the sequel with a brain teaser–nobody agrees who the three are. If you are on the Delhi side of the Tikri Gate, the three idiots are the ones who are leading the agitators. If you are on the other side, the three could be part of the government. And your guess is as good as mine about exactly who they are. Or perhaps, we have all missed film’s deep symbolism. The three idiots symbolize those three laws that are behind all the fuss. You will say that the laws have been put into cold storage anyway for 18 months…but as the veteran producer knows only too well, you must strike when the iron is hot, or the blockbuster could make its producer go bust.

This sequel to Kundan Shahi’s 1983 cult classic has all the ingredients for a masterpiece of the absurd. There is an international pop singer who had wowed the world with songs like ‘Good Girl Gone Bad’. There is a law, or rather three laws and more outlaws than you can number or name. Then of course there is the Republic Day parade in which peaceful, well-mannered tractors go rogue. They choose the Republic Day because they are convinced that’s the best way of getting back at Republic TV. To top it all, a climate activist expresses support for a mob of dedicated stubble burners. Nothing of this makes logical sense. But then neither does life. All we can say for sure is that every patriotic Indian is convinced the good girl has indeed gone bad, very bad. But it’s late now, Ab jaane bhi do yaaron.