There have already been Shasn Cups in India and over 1,000 matches have been played 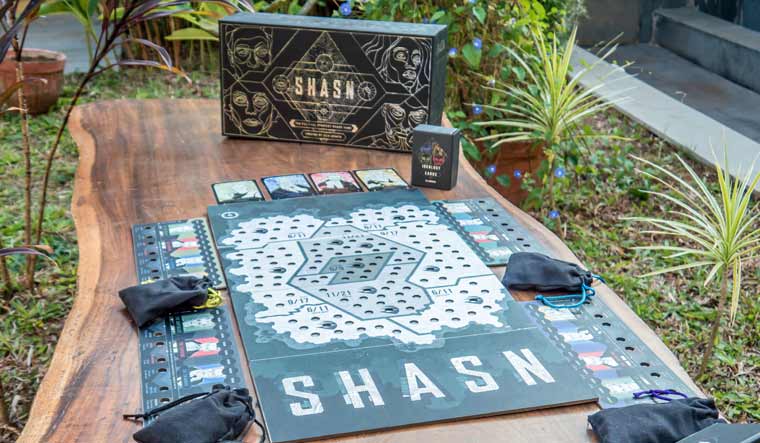 Shasn, a political strategy board game, made all the right noises when it launched a Kickstarter campaign in July 2019. Conceived by Goa-based film and new media studio Memesys Culture Lab, run by filmmaker Anand Gandhi and designer Zain Memon, the table-top game simulates elections and examines democratic systems and the nature of power.  Within 24 hours of its crowdfunding launch, the game had reportedly raised close to Rs 20 lakh from some 333 backers. Now, the makers of Shasn claim they have managed to raise over Rs 4.5 crore for their game on the crowdfunding platform.

"By raising $650,000, Shasn has become the most successful crowdfunding campaign from India since we went live in 2019. We are entering the retail market this month," says Anand Gandhi, whose 2013 debut feature film Ship of Theseus won the national award for best picture.

Shasn is meant to be an extension of the political conversation started after the release of the 2017 nonfiction thriller An Insignificant Man, which was produced by Gandhi and tracked the rise of the Aam Aadmi Party.

"With the documentary, we were more aware of the inner workings of a political party. So, we began designing this game which is an action-packed, fun experience where players feel like characters from the House of Cards in the middle of a political battle," says Memon about the boardgame, which has roped in futurists and historians to design competitive strategy gameplay at the intersection of political thinking, systems theory and narrative storytelling.

"There have been Shasn Cups in India and the US in the pre-run of the game. One thousand matches have already been played with the prototype. It has travelled to gaming conventions around the world and won awards, including at IndieCade, the Sundance of gaming, for best social impact game," says Gandhi on how the board-game has gained global visibility.

"We have been reviewed superlatively by gaming critics. Some of the greatest game designers, like those of Cards Against Humanity, Dungeons and Dragons and Exploding Kittens, have said that it is one of the finest games out there," says Gandhi.

The two to five player game has a modular set-up which can be interchanged to play five different political scenarios: Indian, American, Brexit, politics of the future and the Roman empire. Players contest elections for nine states on the board. There are policy questions at every turn and players get to influence vote banks by collecting resources using a permutation and combination of media,  trust, clout and big corporations funds.

"The game is about the experience of politicking and the amount of passion that comes out. It does not offer any moral prescriptions; you can stand anywhere on the ideological spectrum. But in the end, there are prophecy cards which predict the nation you have built based on your policy decisions. That really is paradigm-shifting," says Gandhi.