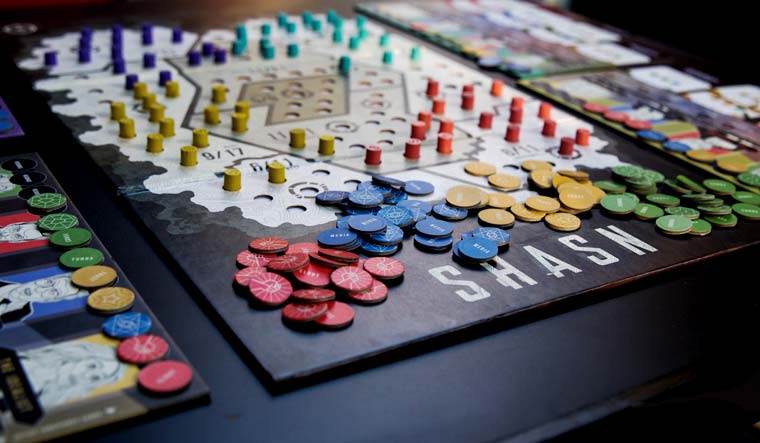 Would you allow self-driving cars on public roads? Should soldiers be allowed to express dissent publicly? Would you legalise betting and gambling?

These are some of the questions that will face players of Shashn, a boardgame which is expected to launch as a Kickstarter project on July 16.

The game will see players don the role of a politician spearheading an election campaign, taking stands on political and ethical issues (with divisive results) and ultimately, battling to win the majority of votes in an election over an abstract nation. The player’s choices will shape their political identity, which can be moulded into roles like that of ‘the capitalist’, ‘the showman’, ‘the supremo’ and ‘the idealist’. Coalitions are formed, trust is broken and the game of politics opens itself to the players.

Shasn — the sanskrit word for governance — hopes to create an immersive space where politics can be discussed and enacted face to face, allowing a greater understanding of how beliefs and ideologies play out in the real world. The game is the brainchild of Zain Memon, a storyteller, media-tech specialist and the co-founder of Memesys Culture Lab. His company worked on An Insignificant Man — a fly-on-the-wall documentary that chronicled the birth of the Aam Aadmi Party in Delhi. He talks about his take on the game and its hopeful impact on the political thought of the common people.

Excerpts from THE WEEK's interview with Zain Memon:

You worked in the production of An Insignificant Man. Was the intimate exposure to the workings of a political party one of the driving forces in the creation of the game?

It definitely gave deep insights and understanding of how the political systems function internally, which is something that does not necessarily reach the mainstream audience. We wanted to put that out in the most prudential way. With (the film’s directors) Khushboo Ranka and Vinay Shukla as mentors and with enough research, we built the game.

Do you believe that every citizen needs to be politically aware and actively involved in the political rhetoric?

To not be politically aware and not participate in politics comes from a place of privilege. When politics affect everything from the price of the food we eat, to what we eat, to who we are allowed to live with, to where we are allowed to live, it is very imperative that every citizen be actively engaged in the political conversations and in the process of making policy decisions.

Why did you choose a board game compared to other formats like virtual or online. Don’t you think that a virtual game could attract a larger audience than a board game?

I consider the conveyance of the message as primary. I think about how to get the message across in the best way possible. We decided that it was important in today’s time for people all across the world to have constructive and meaningful conversations about politics. We wanted to create a board game as people could sit across a table and discuss politics in a healthy way. This was primary. App downloads were secondary. We thought about the best way to do that and we came up with the board game. The imperative ambition is to make sure that people talk about politics with each other. People can converse more intimately and intensively over a board game. I don’t think a virtual or an online game would be able to achieve this effectively.

Kickstarter was initially a platform for people to launch their programs for the first time. Of late, it has turned into a marketplace for digital creators who do not have the distribution that Mattel or Funskool has. Kickstarter has also become the main platform for table top games to be launched, with 69 per cent of all the money raised in Kickstarter going for table top games. It has a large board gaming audience. With many games being funded on a daily basis, it was the right platform for us.

Can you briefly describe how the game works?

It is a 3-5 player game where each player is a politician trying to win the election in the abstract nation that we have built. There are nine territories in the game each with a total number of votes that will be cast. The game ends when all the majorities have been cast. Every turn, instead of rolling a dice, the player answers a policy question which has two conflicting answers, gaining resources based on them. You use the resources to enlist voters or to invest in conspiracies against your opponent. You also gain a rank in the ideology from each policy question. As your rank in the ideology increases, you gain strong powers from it. You build your ideology through the game which is flexible. The game ends with all the nine zones getting a majority and the one with the most majority zones wins.

What is the message of the game?

The game is an insight into how politics works. Through the game, you get a good understanding of the psyche of a politician and the way it all works. We actually grounded the game into the real world thus dealing with real world issues ranging from housing prices to policy choices, making the game a lot more engaging and intimate for the players.