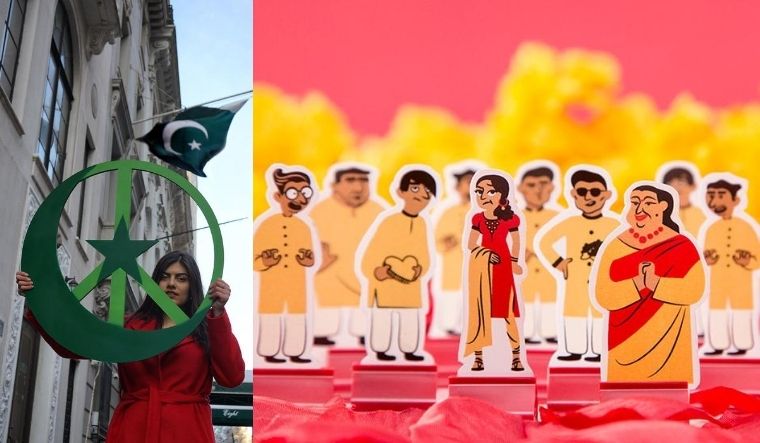 Love is complicated. Equally complicated? Marriage! Finding the right match these days has come a long way from matching kundalis and internet dates choreographed by friends to being set up on blind dates by parents.

A peek into the latest Netflix show Indian Matchmaking gives us a glimpse of how some stereotypes are yet to change. Sima Taparia, Mumbai’s top matchmaker in the show, says many factors are considered before she zeroes in on the right match for her client.

Finer nuances of an arranged marriage are still not understood, especially by western society. “Westerners often speak about acid attacks and honour killings and conflate arranged marriages with forced marriages, when in reality, the two are entirely different,” says Nashra Balagamwala, a 27-year-old from Karachi, Pakistan, who currently is studying Masters of Design at Harvard University. Balagamwala, who created a game Arranged in 2017 to escape an arranged marriage, talks about  the game and her experience. Edited excerpts:

You created Arranged to explain the concept of an arranged marriage to westerners. Please elaborate.

In a society like India or Pakistan, is it possible to do away with the concept of arranged marriages and dowry at all?

I believe it is possible to do away with dowry! I’m from a social sect where dowry is a huge part of marriage. However, in both my siblings’ marriages, there was no such exchange because we believed the tradition was both demeaning and archaic.

I don’t think we’ll do away with arranged marriages for a long time, and I don’t necessarily believe we have to. In societies as conservative as Pakistan and India, where religion and tradition play a big role in the way we conduct ourselves, sometimes an arranged marriage is the only way to meet a suitable partner. If the process is more lenient, it isn’t that different from being set up on a blind date or meeting someone through a dating app.

How can such a patriarchal, complicated system be altered?

I don’t think there’s any solution to it. I believe there’s a series of efforts that need to be made. The women’s march and liberation movements are a great start, but we have an incredibly long way to go.

Pakistan as well as India still have a high number of instances of domestic abuse. In your views, is arranged marriage—where a couple more often does not know each other before they tie the knot—directly proportional to the same?

I do believe, however, that arranged marriages allow for a lower possibility of divorce–this is because more often than not, the women are not accepted back into their parent’s home, cannot provide for themselves, and therefore, are made to stay in abusive relationships.

Also, arranged marriages are forced upon gay men and women, too. Your thoughts.

It’s extremely problematic. This impacts both, the LGBTQIA community as well as the people they are made to marry who have no idea of their sexual preference.

I’ve had friends personally impacted by this. One of my best friends was married to a man who wasn’t straight, and it was only a year into the marriage that she realised what she had gotten herself into, and it immediately led to a divorce.

I hope that one day we live in a world where everyone can marry whomever they please, freely and without any backlash.

How did your family, people in Pakistan react when you launched the game. Give us a brief timeline of the game and its conceptualisation.

The inspiration behind creating Arranged was my journey and struggle to avoid getting an arranged marriage, as well as watching my friends get pressured into loveless marriages with strangers their family picked for them.

I started by making a list of every silly thing I'd done to avoid an arranged marriage—wearing fake engagement rings, getting a tan, cutting my hair short, etc. I then added issues and ideas that I’d never been able to discuss back at home and masked the seriousness of this topic by turning it into a light-hearted game dedicated to running away from the Rishta Aunty–the matchmaker that most girls meet to be paired with a man.

I've had an unbelievably overwhelming response so far. People from all over the world have reached out to provide moral support and words of appreciation.

I've had several Pakistani and Indian girls reach out to thank me for finally speaking up about something so important, and have talked to me about their own arranged marriages and family pressures.

That's not to say that all the feedback has been positive. I've also dealt with a lot of criticism. Many Pakistanis have said negative remarks and have made it clear to me that I'm a disgrace because I'm bad-mouthing the society. Aunties who once loved me and thought of me as a potential for their sons now roll their eyes at me and whisper negative remarks as I walk by.

Tell us how the game works.

The gameplay involves a matchmaker trying to get the teenage girls married off to any and every boy she can find, while they try to run away from her and a loveless marriage.

They can do so by talking about having a career, gaining weight, being seen in the mall with boys or several other things that most societies would consider normal, but are seen as disgraceful in South-Asian culture.

There are three female protagonists and one “Rishta Aunty” (the matchmaker).

The Aunty’s goal is to get all the girls married off. She moves closer to them as she learns about things such as their ability to cook, the amount of dowry they’ll bring in and whether or not they have “childbearing hips”.

The girls spend their time coming up with creative ways to avoid getting hitched by the aunty. They can do so by talking about having a career, gaining weight, being seen in the mall with boys or several other things that every other society would consider normal, but are seen as disgraceful in South Asian culture. Occasionally, the girls may learn things about the aunty, such as the fact that she has a 23-year-old unmarried daughter, and use it to blackmail her into moving away from them.

At some point during the game, the aunty may come across the Golden Boy. The light-eyed, light-skinned, liberal CEO of a business with a foreign passport. This is when the entire game dynamic switches around as it turns into a rat race to get married to the dreamy Mr Right.

The girls then start to make their way towards the aunty by flaunting their talents, such as the fact that they pray five times a day or only have female friends.

Only one girl makes it in time to marry this Golden Boy, and the rest are hitched off to the mama’s boys and womanisers. It is best when played with three to four players.