Gogi Saroj Pal's 'Kinnari' is in sync with her solitude 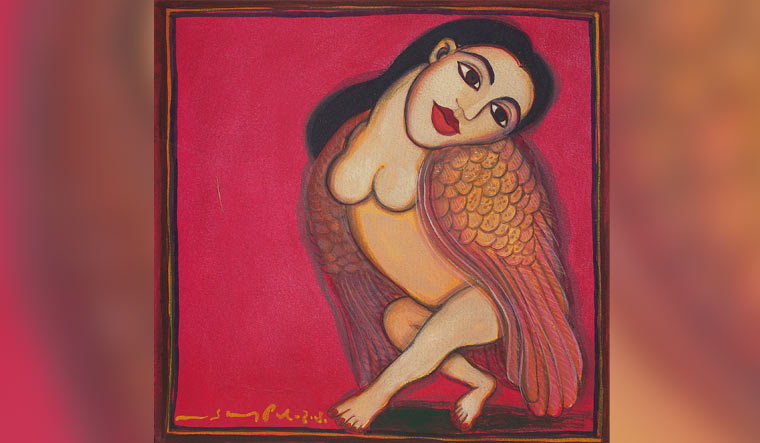 Much of 'Quarantinart' on social media has been about simulating paintings of masters in one's home settings, from Caravaggio to Freida Kahlo. The sudden abundance of time has afforded us the luxury of contemplating art as a distraction from fear. One can just keep looking for hidden meanings and metaphors to make sense of the current crisis.

At the recently concluded fundraiser of 51 artworks from the DAG (formerly known as Delhi Art Gallery) collection, 'Kinnari' by Gogi Saroj Pal might speak to those who frolic in the garden of their mind. The 2008 gouache-on-handmade-paper entitled 'Kinnari' shows a composite being of a half-woman, half bird with her head languorously titled, happily sheltered in the haze of her dreams. Carefree and self-contained, the female figure is in sync with her solitude.

Gogi—born in 1945 in Uttar Pradesh—is one of the first female artists to work with female nudes. Gogi's women are distinctive; her "nayikas" mimic and mock conventional standards of beauty by cavorting around naked while embellishing themselves for their own pleasure as opposed to gloriously bedecked women in the miniature painting tradition who wait for their beloved. Clothes in Gogi's paintings signify shackles of traditional femininity. As one of the first feminist women painters in India, Gogi's art has been pre-occupied with exploring the inner life of women, painting them in their social and political contexts. She is most well-known for her half-human, half-animal works under the series Kamdhenu (half woman, half cow), Kinnari and the Dancing Horse (half-woman, half-bird).

Kinnari, 2008, got sold for Rs 50,000, the lowest fixed price in the lockdown sale which had artworks by the likes M.F. Hussain, Madhavi Parekh, Jamini Roy, F.N. Souza, Nemai Ghosh and others. The entire fundraiser proceeds—Rs 1 crore, with all 51 artworks sold out—will go to two charities: PM-CARES Fund and Lt. Governor/Chief Minister Relief Fund, Delhi. Even though marked at a lower price, Kinnari has lessons to offer lonely birds stuck in isolation in these surreal times.

Gogi’s kinnaris have wings coming out their bodies, suggesting that the mind is free to fly and wander even when grounded as wives, sisters, daughters, caregivers, nurturers or capitalist slaves. As the catalogue succinctly observes, "One’s freedom as a person is not implicit in the physical being as in one’s mind space, and all emancipation springs from within one’s own self". In our present state of unfreedom, it is a liberating thought.