She writes to conquer 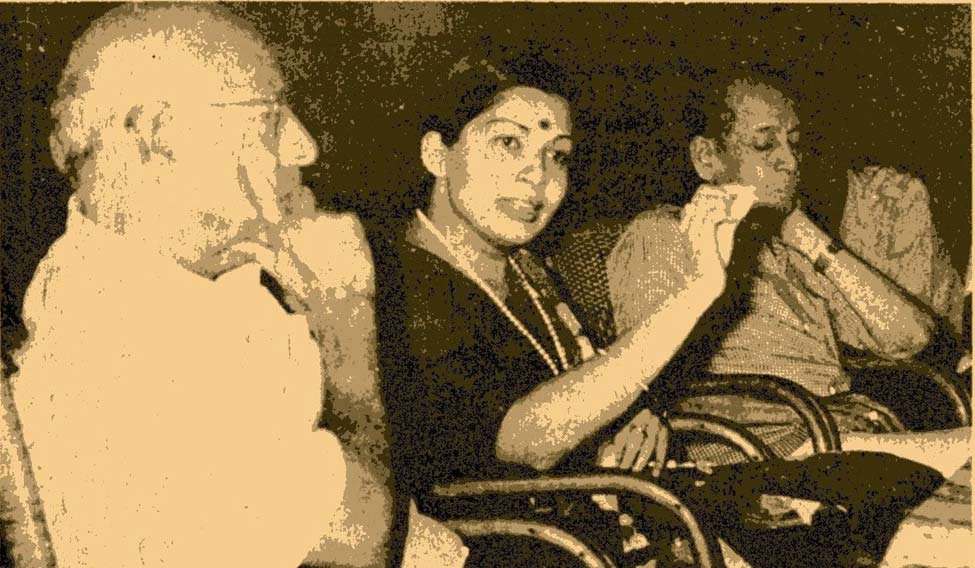 When Jayalalitha began to tell her story in the Tamil weekly Kamudam, many eyebrows were raised. The magazine advertised the news over the radio. The commercial over the radio was exciting: Jayalalitha’s own voice was on the air; “I am neither a Sita nor a Savithri. I have done some mistakes in my life and I want to tell you all about it. Read it for yourself and then be my judge.”

The promise, that she would tell it all, did not last long. It was a promise made when the chips were down, when the leading man was out and away. When MGR returned to show interest in her life, and the “open-heart” serial had reached the stage of her entry into films, Jayalalitha discontinued her serial. Apologising to her readers she said that when she started it she really wanted to tell them everything but now she had realized there were many characters in the narrative who were still alive and they might not relish it. So she was constrained to stop.

Her writing began during the lean period of her life and it continues still, with her story appearing in the AIADMK’s magazine called Thai. She had first begun to write for Cho’s Tughlak on a variety of subjects ranging from women’s life to mercy killing.

She also started writing a serial story in a magazine called Aswini. But that magazine itself folded up soon. She serialized a social novel in the prestigious Kalki Tamil weekly and wrote another novel in Kumudam’s monthly, Malai Mathi.

Kalki had launched a special issue for film music called, Thirai Isai, and the magazine editor Rajendran sought Jayalalitha’s advice and help to bring it out which she readily provided. Around that time, in June 1980, Kalki had started a serial of hers, which really stirred a hornet’s nest. Now Kalki has always been a very conservative magazine, serious in content and highly respected by Tamil readers. Jayalalitha’s serial called Uravin Kaidigal (Prisoners of a relationship) created a big row in literary circles and the magazine received a spate of protest letters saying the story was in bad taste and a magazine like Kalki should not have published it.

The Kalki serial ran for 15 weeks. It was the story of a college girl who meets a divorcee film star and falls in love with him. The man too reciprocates and after long and passionate courtship, they decide it is time they got married. The man goes to the girl’s house to see her mother and discovers the mother was none other than his own divorced wife. The girl and the film star commit suicide and the mother goes insane. The ending of the story, which indicated incest, triggered off a row.

Another controversial story that she penned was Nenjile Oru Kanal (A fire in the heart) which was first serialized for about 30 weeks in Kumudam, discontinued from there and resumed under the same name in the AIADMK’s Thai. The heroine of this story is a woman called Devaki who suffers a lot and is finally thrown out by her husband. It was at this stage in the story that Jayalalitha switched the serial from Kumudam to Thai. She gave an advertisement in leading Tamil newspapers, such as Dina Thanthi before her last installment appeared in Kumudam, that Devaki has left her husband’s house and she is also leaving Kumudam but will meet the readers soon in some other place. Soon after, Thai resumed the serial with Devaki becoming Devi and a super film star. The serial is over 30 weeks old and is going strong.

What do the men of letters, people who had been her colleagues in magazine world, feel about her entering politics?

Rajath, who brought out her story in interview form in Kumudam, feels she would be an asset anywhere. “I told you she is bright and not like the usual crop of politicians. Another plus point with her is she is bluntly honest,” he says.

It was Rajath’s ‘open-heart’ series in Kumudam magazine that brought good luck again to Jayalalitha. Even as the serial was on, some film offers came her way and she began acting again. MGR too evinced interest in the serial and this perhaps led to their reunion. Rajath recalls that the feedback to the serial was tremendous.

But Rajendran has his own reservations about the lady’s entering politics. “Jayalalitha has been a very bright lady. I can say a perfect lady in her manners, well-read and knowing how to treat people. But then it would have been good if only she had confined herself to the literary field. These film stars should not capitalize on the weakness the poor, illiterate people have for them. I think it is disgraceful that people should capitalize on their popularity, be it MGR, NTR or now Jayalalitha. The exploitation has so far been restricted to the silver screen but now they have brought it unashamedly to the polling booths.”

Would she succeed as a politician, he was asked.

“I don’t think she is made for it.” Rajendran replied. “But, then it is very likely that people will accept her as the next chief minister. What can we do if that is our fate?”