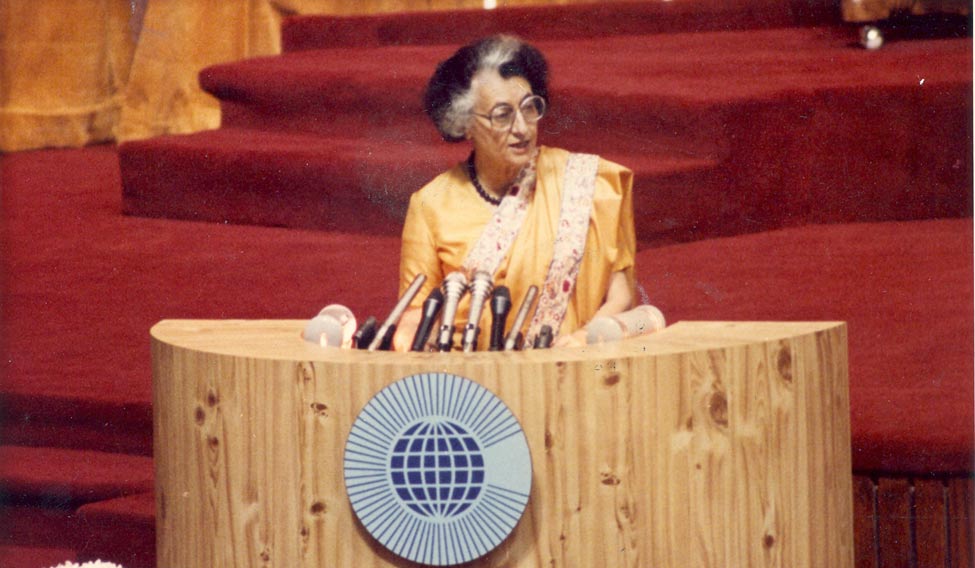 January 19 marks the 51st anniversary of Indira Gandhi taking charge as India's first and only woman prime minister. Popularly known as the Iron Lady of India, she is the longest-serving woman prime minister in the world, having been in power for 15 years.

The untimely death of Lal Bahadur Shastri lead to a political debacle and numerous celebrated contenders contested for the position. Unable to single out a clear contender, Gandhi was chosen to continue her father Jawarharlal Nehru's legacy, as she was considered easy to manage.

Known to be a decisive, ruthless and authoritarian leader, one cannot dispute the fact that it was under her governance that crucial reforms were made that were instrumental in shaping the country's economy. Back in the sixties, when all nations in east Asia were heading towards more liberal economic policies embracing globalisation and privatisation, Gandhi showcased an inclination towards the extreme left, inspired more by the realpolitik. At a time when the country's economy was faltering, Gandhi's stand earned the chagrin of powerful Congress leaders, led by Morarji Desai.

Gandhi, however, answered her critics by bringing about radical socialism-inspired changes in the country’s economic, political, international and national policies. One of her crucial economic decisions included the nationalisation of 14 major commercial banks in 1969. The move proved to be significant, as the geographical coverage of banks increased, especially in the rural parts of the country with the number of branches rising from 8,200 to 62,000.

The nationalisation of banks increased household savings and saw investment in small and medium-sized enterprises and agricultural sector. Jayaprakash Narayan, famous for leading the protest against Gandhi in the 1970s, wholeheartedly praised Gandhi for her move.

Various sectors like coal, steel, copper, cotton textiles, and insurance industries, too, were nationalised to protect employment and secure the interest of the organised labour. Post 1971 war against Pakistan, due to which India had to face oil crisis, Gandhi nationalised the oil companies as well, leading to the formation of Indian Oil Corporation (IOC), the Hindustan Petroleum Corporation (HPCL) and the Bharat Petroleum Corporation (BPCL). The oil companies were to keep a minimum stock level of oil, which were to be supplied to the military as and when the need arose. The private sector industries were placed under strict regulatory control.

Staying true to her socialist fundamentals, Gandhi questioned the continued existence of privy purses for Indian monarchs and argued the case for abolition based on equal rights for all citizens and the need to reduce the government's revenue deficit. In 1971, Gandhi managed to abolish the privy purse after having it successfully passed as the 26th Amendment to the Constitution of India. The principle of equal pay for equal work for both men and women was enshrined in the Constitution during her administration. Gandhi also introduced the Freedom Fighters' Pension Scheme (FFPS) in 1972.

Under her premiership, three Five-Year plans were implemented, of which two were successful in meeting the targeted growth. Remarkable changes in the agricultural production in India were observed during the Green Revolution led by the government. From a nation that was prone to famines and heavily reliant on imported grains, India could now manage a decent portion of its demands from domestic production, with Gandhi's target being growth with stability and progressive achievement of self-reliance. Under her administrative policies, Meghalaya, Manipur, Tripura, Haryana, Punjab and Himachal Pradesh were granted statehood while Chandigarh and Arunachal Pradesh were declared union territories.

The year 1971 also proved to be Gandhi’s finest hour in foreign and security affairs. Her intuitive grasp of the situation, which the Pakistani rulers escalated to change the geopolitics of east Pakistan, gave her the opportunity to emerge as a military strategist and a diplomat par excellence on the regional and the world stage. With the clear and decisive victory over Pakistan, Gandhi managed to establish India as a force to contend with on the international stage. She was hailed as Goddess "Durga" by opposition leader Atal Bihari Vajpayee at the time for her iron-willed resolve and strategic competence.

With the Cold War at its height and world peace being subjected to the grave threat of a nuclear holocaust, Gandhi remained steadfast in her commitment to the policy of non-alignment as laid down by Nehru, without succumbing to American or Soviet pressures. Henry Kissinger, an American diplomat in his memoirs admitted that Gandhi outclassed and outmanoeuvered even American President Richard Nixon, with a rare statesmanship in tackling international disputes. Putting India on the international scientific map by conducting the country’s first underground nuclear test at Pokhran in 1974, Gandhi signalled India’s nuclear potential and its unwillingness to abide by the nuclear rules of the superpowers.

With great power comes great responsibility, and sometimes notoriety. The 21-month period of Emergency from 1975 to 1977 marked one of the darkest phases in Indian democracy. From breaching protocols, making amendments to the Constitution to imprisoning those who opposed and extreme censoring of the press, Gandhi made herself quite unpopular for taking advantage of her power and position to control the masses, subsequently losing her seat in the government.

Gandhi rose back to power with the dissolution of the Janata Party-led government in 1980, earning sympathy and votes from the people after having come out clean over the accusations of planning to kill opposition leaders during Emergency. The implementation of the Operation Blue Star to flush out Sikh militants pursuing self-rule for Punjab in 1984 was another of Gandhi's misjudgments, which would eventually lead to her assassination by her own Sikh bodyguards.

Despite the black marks of Emergency and Operation Blue Star, some of India’s greatest achievements occurred during Gandhi's time as prime minister. Her role in guiding the developing nations of the world and her personal contribution towards disarmament and global peace cannot be repudiated.

Former prime minister of Singapore, Lee Kuan Yew, once said, “Indira Gandhi was the toughest woman prime minister I have met. She was feminine but there was nothing soft about her. She was a more determined and ruthless political leader than Margaret Thatcher.” Probably, one could say her biggest contribution to the country was putting India on the world map at a time when the world was divided into capitalist and communist ideals.