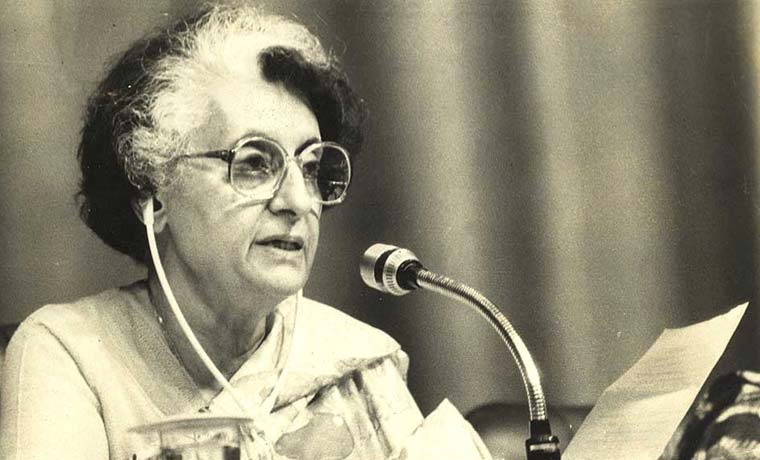 As I walk from St Antony’s College to Bodleian Library to devour books and papers too precious to be loaned, with autumn rusty, leaves strewn across pavements in the blustery wind, I pass the gates of Somerville College. As I do so, my thoughts invariably descend on Indira Gandhi, who read here more than 80 years ago and whose 104th birth anniversary is on 19 November this year.

Daughter of one of the busiest and most sought after leaders of the Indian freedom movement, Jawaharlal Nehru, Indira Nehru’s schooling was uncommonly disrupted and nomadic. Born at her family home Anand Bhavan (House of Joy) in Allahabad, later renamed Swaraj Bhavan (Abode of Freedom) after its owner and her grandfather Motilal Nehru donated it to the Indian National Congress. She went to kindergarten at a then newly opened nationalist Modern School in Delhi, then enrolled at St Cecilia’s school in her home town, thereafter read at L’Ecole Internationale, a school for League of Nations’ children in Geneva, from there to another school in Chesieres, after that to then to L’Ecole Nouvelle in Bex, both also in Switzerland, back to St Mary’s Convent in Allahabad, next to Pupils’ Own School in Pune, where bubonic plague broke out, which led to her being transferred to the Nobel laureate Rabindranath Tagore’s novel school at Santiniketan or Abode of Peace, about 160 kilometres north of Kolkata.

She was uprooted from there as well. While she was rehearsing for her first solo appearance in a Manipuri dance performance, Tagore – who had just received a telegram from Nehru – summoned her to break the news that Kamala (who suffered from tuberculosis) was worse and must go to Europe quite urgently. Since Jawaharlal was imprisoned by the British, Indira had to accompany her. She was loving Santiniketan and her French teacher Frank Oberdorf had fallen in love with her – a feeling she didn’t entirely discourage.

So, in 1935, Kamala and Indira travelled to Germany for treatment of tuberculosis. Jawaharlal Nehru, having been released from prison in India on compassionate grounds, joined them. When Kamala’s condition ‘took a turn for the better’ in late October – he decided to go to England accompanied by Indira. The object was to secure admission for her into Somerville College, Oxford.

On 5 November, they met the Principal Helen Darbishire, who waived the rules of Indian students having to qualify in India ‘for Indira - or more accurately, for the daughter of Jawaharlal Nehru’.

At the end of January 1936, Kamala was, at her demand, moved by ambulance to Clinique Sylvana in Lausanne, Switzerland, which was less than an hour away from Indira’s finishing school L’Ecole Nouvelle. They, thus, saw each other at least every weekend.

In early February, Nehru – while in London – learned he had been elected president of the Congress. On the 8th was the Nehrus’ twentieth wedding anniversary, which they spent together. Their relationship had blossomed after the initial years of comparative incompatibility. 20 days later she passed away. Jawaharlal, Indira, the Congress stalwart exiled in Europe Subhas Bose and Feroze Gandhi were with her when she breathed her last.

In March 1930, Kamala and Indira were picketing at Allahabad’s Ewing Christian College when the former fainted in the fierce midday sun. Feroze, a student at the institution, ‘ran for water and a fan to revive her’. ‘Henceforward Feroze Gandhi was Kamala’s shadow and disciple. Inevitably this meant that he saw a great deal of Indira, too, though for several months Indira did not differentiate between this plump, loquacious Parsi boy and the other adoring assistants Kamala attracted.’

A month before Indira’s sixteenth birthday in 1933, Feroze had proposed marriage to her, only to be forthwith turned down. A year later, though, when Kamala was undergoing treatment at a sanatorium in Bhowali, now in Uttarakhand, and they encountered each other again, she warmed to him, except that she did not entertain his repeated propositions for their betrothal.

At the end of June 1936, Indira appeared for her Oxford entrance examination. She failed, with a particularly poor result in Latin. Agatha Harrison, a Gandhian who had established the Indian Conciliation Group to work for Indian freedom and a friend of Jawaharlal, suggested she join a privately-run Badminton School, near the south-western English city of Bristol, to buttress her Latin. Indira, now nearly nineteen, disliked the place and its rules and soon decamped to London, where she rented a room in the homely northwest district of Swiss Cottage and began taking private tuition in Latin.

She sat the exam again in September and passed in English, French and mathematics, but didn’t take the test in Latin, thus being forced to trudge back to Badminton School for a more intense course in the language. She later spoke of a 'healthy or unhealthy disdain of exams'.

While in London, she corresponded with her father, who had become president of the Congress, telling him that she loved the city, though she was sometimes lonely. This was a white lie, for Feroze, who was studying at the London School of Economics, lived nearby and they were now much in love! Among their treats was to eat at an Indian restaurant in the London University area and chew expensively priced paan at a nearby shop.

Oberdorf reappeared in her life. He visited London and invited her to spend Christmas with him in Germany. She was momentarily in two minds, but declined the suggestion and communicated to him somewhat clinically that she didn’t want to love him ever!

In March 1936, much to her pleasant surprise, she succeeded in her Latin exam. She could now put Badminton behind her and look forward to Somerville. She arrived there in October 1937. Admission meant she had ‘matriculated’. So, wearing an academic gown and cap, she trooped to the University's Sheldonian Theatre to be ceremonially so acknowledged. She then focussed on her first-year course in Roman, Anglo-Saxon and medieval history. ‘They work us like slaves’' she complained to her father.

Academics was not Indira’s forte, but Somerville inspired her to concentrate on studies. She did well in her tutorials. She joined the Indian Majlis, a society of Indian students at Oxford. Once a term all college students were invited to dine at the Dining Hall in evening dress. She attended this. She was otherwise generally missing after sunset; for she would either be at Majlis meetings or taking a train to London for an event of the India League, a group demanding Indian independence founded by V K Krishna Menon, a book publisher and Labour party activist.

At the Majlis and the League, she was seen rather than heard. Other members were keen to make her acquaintance because she was Jawaharlal’s daughter. On one occasion when Menon compelled her to speak at the League, it was a disaster. But she was chosen to garland Bose - within days of being unanimously elected Congress president - when he alighted at Victoria train station in south-west London in January 1938.

‘She enrolled volunteers for the International Brigade for Spain (to fight fascism in that country), auctioned one of her bracelets to raise money for the Republicans (it fetched £50)….. Feroze was even more active. To Indira’s dismay, he tried to go to Spain to fight, but British intelligence – which closely monitored all India League members, including Feroze and Indira – impounded his passport.’

In March 1937, she got through in French, constitutional law and history and political economy in her pass moderations exams. But not in dreaded Latin. ‘This was not surprising. Whilst other Oxford students had studied Latin for years at school before coming to university, Indira had had only seven months of cramming at Badminton.’

Indira akin to her mother was of frail health. ‘By the late spring of 1938 she was very run down physically and psychologically, and at the eleventh hour she decided to absent herself from the pass mods Latin exam (in June, which was her last opportunity).’

Jawaharlal visited London soon after. Indira naturally joined him. Christine Troller, the wife of the Jewish poet Ernst Troller, who met her, wrote to her father quite philosophically saying: ‘She seems to me like a little flower which the wind might blow away so easily, but I think she is not afraid of the wind.’

When father and daughter ventured on a European tour, Indira was struck by pleurisy at Budapest – an illness that had complicated her mother Kamala’s condition. She spent time in hospital both in the Hungarian capital and subsequently in London. When her second year at Somerville began, she was too ill to return. Her doctors advised her to skip a term. Jawaharlal thus took her back to Almora, near Bhowali, to recover. She was, in fact, absent for two terms before she returned to England in April 1939 – against medical advice – largely because she had suffered as much from her separation from Feroze as her ailment.

A Harley Street consultant did an x-ray of Indira’s chest. He diagnosed she had "a shadow on her left lung, and said that she must be “very careful." In the interim, the Somerville principal hoped she would return for the remainder of the term. Dr P C Bhandari, one of her physicians, said: ‘Impossible’! It was, however, agreed she would return in October. The college recommended she switch to a diploma course in social and public administration, which did not entail reading Latin. It was reluctant to ‘send down’ the daughter of Jawaharlal Nehru. Her doctors prescribed she spends the summer in Switzerland before returning to Somerville. Feroze went with her.

Two weeks before she was due back at Somerville, Indira came down with a severe cold, which developed into another bout of pleurisy. She was hospitalised in London en route to a sanatorium in Switzerland. The prognosis was she might have TB. She had to remain at the sanatorium for a year before she got back to London.

It was 1940. Indira and Feroze had been engaged for almost four years. She wanted to get married in London. He pointed out her father would feel extremely injured if they did so. But she again fell ill, so wedding plans were postponed. In March they sailed for India, where the marriage duly took place - against Jawaharlal's wishes - and Indira Gandhi inexorably followed in her father’s footsteps to absorb herself in public life.

Thus ended her abortive stint at Oxford. But this did not hold her back. Her rich experience of proximity to her father, her varied travels, meeting eminent people - which were equally rewarding - stood her in good stead. When she was about ten, her father took her to see George Bernard Shaw's Saint Joan. Her aunt Krishna Hutheesing wrote in her memoir that her niece used to stand on the verandah of Anand Bhavan and proclaim: 'I am practising being Joan of Arc..... someday I am going to lead my people to freedom.....'

30 years after settling back in India in 1941, she registered her most significant triumph – liberation for the people of East Pakistan and consequently the birth of Bangladesh. Arguably, the greatest diplomatic and military success for independent India. On 16 December next, it will be half a century since the Indian armed forces overran the eastern wing of Pakistan in a mere 12 days and obtained an unconditional surrender from nearly 100,000 Pakistani troops.