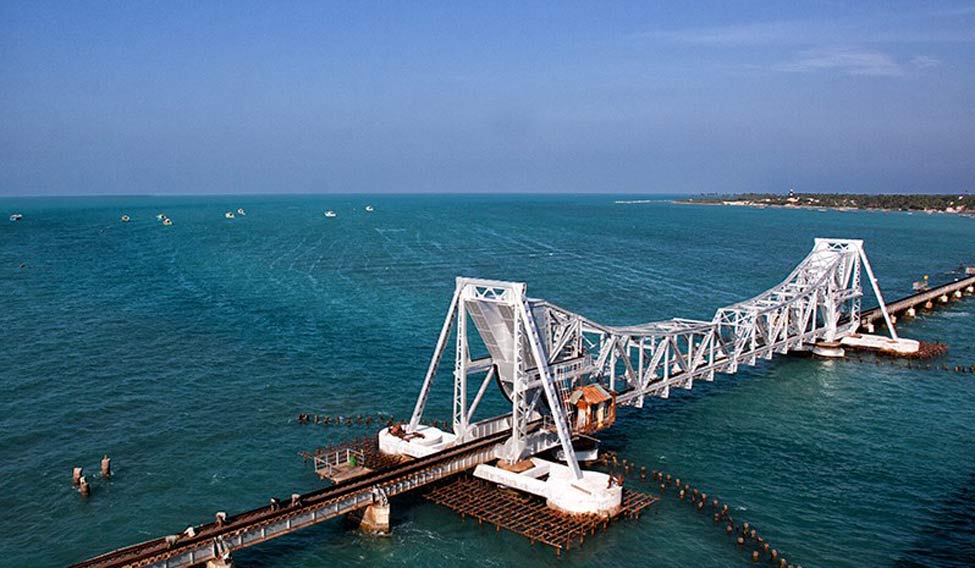 Off the eastern coast of Tamil Nadu, some 500 km south of Chennai, lies Pamban Island. Seemingly a stone's throw from neighbouring Sri Lanka, this is an island steeped in historical significance, and with some of the most resilient people alive.

One of the longest sea bridges in the country, the iconic Pamban Bridge connects the mainland with the island, also known as Rameswaram Island. With breathtaking views of the Bay of Bengal, the journey to the island over this bridge rewinds one to colonial times, when it was built by the British to improve trade relations with Ceylon (now Sri Lanka).

Built in 1914 as India's first-ever sea bridge, the 6,700-foot structure is in itself an engineering and historical marvel that has withstood several of nature's furies — from storms to cyclones.

The bridge initially ran up to the southeastern tip of the island, Dhanushkodi, now a ghost town. After a cyclone hit it in 1964, Dhanushkodi was washed away by the sea and is now a mere skeleton of the town it once was.

Remnants of its railway lines, church and the devastated dwellings of people can still be seen, though in very poor shape.

From the tip of the region, cell phone networks welcome one to Sri Lanka.

Visible from here is the Adam's Bridge — a former land link between India and Sri Lanka, now undersea — that is also known as Rama Setu, the bridge believed to have been built by Lord Rama's army to rescue Sita from Lanka.

Nambavel, a 50-year-old, says there can be no other home for him than Dhanushkodi, of pristine waters and picturesque views of the Bay of Bengal. Three generations of his family have lived here. Although the deadly cyclone forced many to migrate to villages around, some 50 families, including Nambavel's, refused to leave.

"This has been our home for as long as we've known. We grew up playing in the sea water, then learnt to make our living through fishing or running petty shops," Nambavel said.

"Even as many people we know migrated to nearby villages, there's no home like Dhanushkodi for us — the sea is everything," he said.

With sea levels rising around the world due to global warming, the region is constantly threatened by nature. But that does not deter Nambavel: "Even if another cyclone is close, most of us would like to be here, a land we've grown up in."

Surrounded by sea and sand, the town cannot grow any crops and has no provision for electricity due to the wind velocity in the area. It is only the solar panels, an initiative of late President A.P.J. Abdul Kalam who hailed from Rameswaram, that light up the shacks of the few residents.

With Rameswaram considered one of the holiest places for Hindus, a majority of visitors make temples the focus of their travels.

Aiming to showcase the rich cultural and historical heritage of the island, apart from the much-visited temples, Utsa Majumder, the General Manager of the newly-launched Hyatt Place, Rameswaram, is working extensively on various itineraries that uncover the untrodden places in and around the region.

"There's a lot more that the Rameswaram Island can offer than just the temples it is mostly known for. We want people to know that Rameswaram can be an experiential destination and not just a pilgrimage spot," Majumder said.

"From historic places that have stood the test of time to some incredible architecture and engineering like the Pamban Bridge, there's a lot a tourist can see here," she added.

The hotel offers these itineraries to travellers according to their interests, allowing them to explore different facets of the region, along with menus that present the cuisines of the land — from kuzhi paniyaram (rice batter dumplings) to kara kozhumbu (a spicy tamarind gravy).

The region also celebrates its much-beloved son Abdul Kalam. His two-storeyed house on Mosque Street is filled with thousands of his books and is always bustling with people.

A Rs 15-crore memorial to India's "Missile Man", inaugurated by Prime Minister Narendra Modi on July 27, has also grown rather quickly as a tourist attraction. The memorial houses a copy of the last speech Kalam delivered at IIM-Shillong on July 27, 2015, a number of pictures of his meetings with world leaders, and a host of other objects.

As an island that is yearning to receive a boost to its tourism, even a bottle of water bought from a shack in Dhanushkodi goes towards supporting a family.

Reaching there: Flights to Madurai, the nearest airport, from all major cities. From Madurai, Rameswaram can be reached in 3 hrs 30 min (160 kms) by road.

For the picturesque views from a train, pick one that is available almost every hour to Rameswaram from Madurai Railway Station.

Stay: There are four-star, three-star hotels and smaller lodges in the town.

Best time to visit: October to March as the temperatures drop and stay between 20 to 30 degreesC, making travel easier.