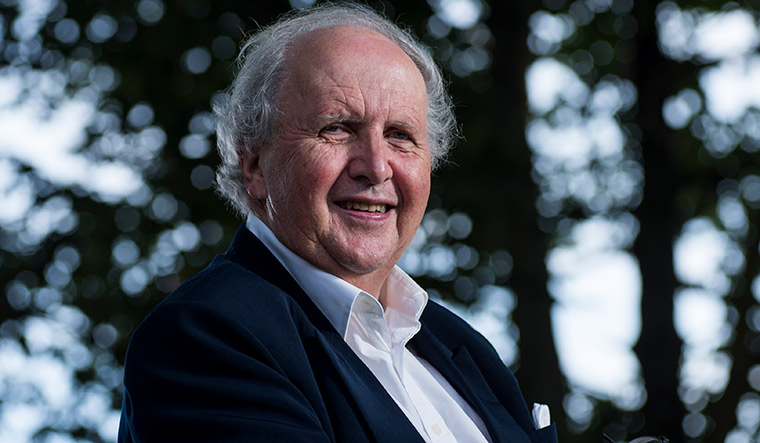 At 70, Alexander McCall Smith has the energy of a toddler and the discipline of a Zen master. He writes six novels a year. “It has got out of control,” he says with a booming fill-the-room kind of laugh. At the moment, he is writing another addition to The No. 1 Ladies’ Detective Agency and the second instalment of his book on the newly created Scandinavian detective, Ulf Varg. “I am always writing two books at a time,” he says over the phone from Edinburgh. “I was up between 3am and 5:30am and I got quite a lot done. Then I go back to bed. I find that if I have written, I will go back and have another couple of hours of sleep, which is quite refreshing.”

In between his literary commitments, Smith finds time to squeeze in music. His wife, Elizabeth, and he are founder members of The Really Terrible Orchestra. Despite the name, or maybe because of it, it is very popular on the Scottish circuit. He recently released an album—These Are The Hands—with a composer in Edinburgh. He has an operetta on Sir Walter Scott’s book Guy Mannering out in June.

His literary pursuits, however, still dominate. Varg was “invented” on Twitter a few years ago. “I was asked by Twitter to inaugurate a book festival on Twitter a few years ago. It was the days of 140 characters. I did a number of stories, and invented Ulf Varg,” says Smith. “I did not think very much about him. But, my London publishers said I should write more about him. I sat down and wrote a whole book about him. He just came on to the page.”

The Department of Sensitive Crimes—Varg’s first appearance on the bookshelf—is out. And so far, Smith seems to be enjoying his moment of Scandi blanc. He turns the gritty and grisly Scandinavian noir into a delightfully irresistible, sunny heartwarming experience. “I loved doing it,” he says. “I thought it was rather nice to turn the genre on its head in a way. The Scandinavian noir has just a high body count.”

Varg works in Malmo’s Department of Sensitive Crimes. Like his Scandinavian noir counterparts, he is suitably melancholic. He also has a failed relationship, a dog and a therapist. There ends the similarity. Instead of dark stories of violent deaths, Varg is called upon to solve crimes of a more bizarre nature, like the murder of a man who is a figment of a girl’s imagination.

The Department of Sensitive Crimes captures the ordinariness of life, which is at the heart of all Smith books. He does not shy from the uglier aspects of human nature—jealousy, envy, lies and even adultery. But, there is always empathy. An Alexander McCall Smith novel is more than just a book; it is an experience—like tea and crumpets—fuelled by the characters he conjures up. Take, for instance, Isabel Dalhousie (The Sunday Philosophy Club Series), a woman philosopher who loves classical music and lives in an ageing house in Edinburgh. Or, Mma Precious Ramotswe of the The No. 1 Ladies’ Detective Agency, which is set in Botswana. Mma Ramotswe’s success 20 years ago ensured that Smith, who was a professor, could retire to write.

Straddling both the adult and the children’s world, Smith creates books that are intimate, vividly imagined and always charming. And, Smith’s characters are just that: textbook charming, with just the right touch of whimsy with wit. “I much prefer writing about the small transactions of life,” he says. “Because the small transactions of life are reality for most of us. Big things really don’t happen. Thank goodness! That is what makes life.”

In his worlds, gorgeously sinkable and comforting as chocolate, even dogs have personalities. “Dog characters are very important,” he says. So, Corduroy Mansions, another popular series, has Freddie de la Hay, a Pimlico terrier. He is vegetarian and insists on using a seat belt. Martin, Varg’s dog, is deaf and is the only dog in the world who can lip read. “Martin is a good dog. He has lots of possibilities. Being a Scandinavian dog, he has got slight depression,” he says. “I am very interested in what goes on in a dog’s mind.”

Each book slips into a gentler world and time. It is what reading was always meant to be—a quiet escape that leaves you refreshed and hopeful. So, grab them! Everyone needs a little hope. And, some Smith.

THE DEPARTMENT OF SENSITIVE CRIMES