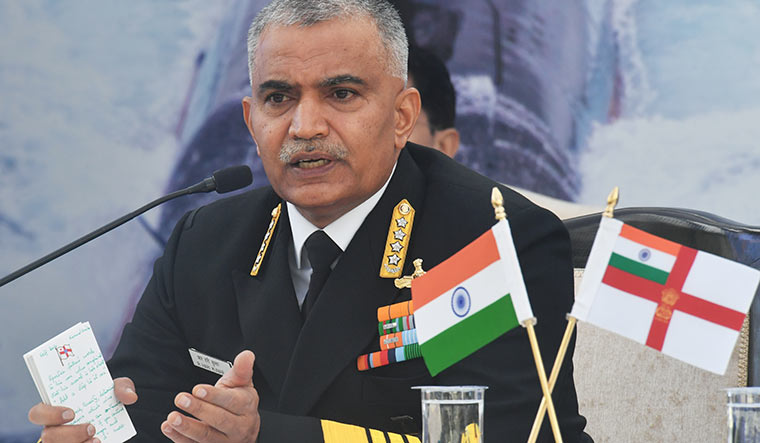 Admiral Radhakrishnan Hari Kumar, who took over the reins of the Indian Navy on November 30, has clear views on the need for theatre commands and the role aircraft carriers can play in safeguarding India’s maritime interests. In an exclusive interview, the chief of the naval staff also talks about the Navy’s modernisation, new aircraft carrier Vikrant, and gender equality. Excerpts:

A/ Aircraft carriers are central to the Navy’s concept of operations and the Navy considers carriers inescapable to safeguard maritime interests against the backdrop of the changing geopolitics in the Indian Ocean region and beyond. The Carrier Battle Groups (CBGs) are a significant source of power projection and provide freedom of manoeuvre in the vast area of operations or interest. There are no alternatives to CBGs. Shore-based aircraft have a limited reach in our vast maritime area of interest. They can provide air defence to the fleet only when it is operating close to the coast, which is a rarity in the naval concepts of operations.

Similarly, in the maritime strike role, shore-based aircraft have limited range with inherent time delays considering the distance to targets at sea. The surety of support from a shore-based fighter is intrinsically linked to the unpredictable factor of weather at the launch point as well as the intervening airspace between the launch point and the target. Accordingly, the relevance and importance of aircraft carriers have been acknowledged world over. Thus, many major maritime powers, such as the US, the UK, Italy and France, operate aircraft carriers. China is also building a large number of carriers.

Q/ When can we expect IAC Vikrant to join the Navy fleet?

A/ The maiden sea voyage of IAC Vikrant was conducted on August 21 as a check sortie for trials of hull, navigation and communication propulsion systems. These trials have established confidence in the ship design. This was followed by the second sea trials sortie in late October and early November. The carrier would continue to undergo further sea trials to comprehensively benchmark performance of equipment and systems before handing over the ship to the Navy. Delivery and commissioning of IAC 1 is being planned as part of the ‘Azadi Ka Amrit Mahotsav’ celebrations to commemorate the 75th anniversary of India’s independence.

Q/ How do you see the plan for the theaterisation of the Indian military?

A/ India is faced with tremendous security challenges, both traditional and non-traditional. The ongoing flux in the geopolitical situation and its security implications require India to adopt an integrated approach towards development of combat capability and its application, to protect its national interests. Hence, effective application of ‘Joint Force for Joint Effects’ across all domains is the pre-requisite for winning future wars.

In the Indian context, the raising of theatre commands is the next logical step in the ongoing reforms in defence organisation of the country and culmination of a long consultative and introspective process and validation/ trials of many models aimed at achieving jointness among the three services.

Q/ Does the Indian Navy have any roadmap for unmanned technologies?

A/ An ‘Integrated Unmanned Roadmap for the Indian Navy (IN)’ was released by Defence Minister Rajnath Singh on October 18, 2021. It provides a comprehensive unmanned systems roadmap in consonance with the Indian Navy's Concept of Operations, and also evaluates the current state of unmanned systems and autonomous technology across the globe. The focus remains on providing overall guidance as a Capability Development Document for the Indian Navy over 10 years and caters to induction of unmanned systems in all domains of maritime warfare. A reference version of this roadmap will also be promulgated in the near future for the benefit of our industry to focus its R&D efforts, which will promote Aatmanirbhar Bharat vision.

Q/ Please throw some light on the Navy’s modernisation plan.

A/ The Navy’s modernisation and expansion follow a long-term perspective plan based on the Integrated Capability Development System (ICAD) process, focused on being a future-ready force, with the capability and capacity to meet evolving challenges. We currently have 39 ships and submarines under construction, with Indian shipyards building 37 of these, contributing significantly to the government’s Aatmanirbhar Bharat initiative.

One of our key projects is the first Indigenous Aircraft Carrier, being built at Kochi. The ship has undergone extensive sea-trials, and is scheduled to be commissioned in August 2022, giving a major fillip to the Navy’s ability to protect, preserve and promote our national interests.

Among other major projects are four Project 15B destroyers, of which, the first ship, INS Visakhapatnam, was commissioned on November 21. Seven frigates of Project 17A Class, scheduled for induction from 2022, are also under construction. Further, 16 Anti-Submarine Warfare Shallow Water Craft have also been contracted. Among submarine projects, the fourth submarine of six under Project 75, INS Vela, was commissioned on November 25.

Apart from vessels under construction, ‘Acceptance of Necessity’ has also been accorded for another 43 ships and six Project 75 (India) submarines to be built in India. In the aerospace domain, HAL has been awarded a contract to deliver 12 Dorniers, 16 Advanced Light Helicopters and eight Chetak. Further, AoNs also exist for procurement of 111 Naval Utility Helicopters under the Strategic Partnership Model.

The Navy is working closely with DRDO and the industry to enhance the technological base in the country. Concurrently, there is a need to enhance the capacity and expertise of our public sector shipyards to reduce build-times, and also involve the private sector to make good current short-falls in our force levels. Naval force modernisation and force accretion is a slow and deliberate process, and the Navy has continued to focus on self-reliance and indigenous solutions.

Q/ Compared to China, our submarine strength is small. How are you planning to bridge the gap?

A/ As on date, the Indian Navy has 17 submarines in commission.

As far as the expansion plans of the submarine arm are concerned, the first three P-75 submarines were commissioned between December 2017 and March 2021. The fourth submarine Vela was commissioned last month and the fifth submarine is at an advanced stage of trials. The RFP for a new class of submarines under Project 75 (I) has been issued.

While the submarine force level is adequate to respond to current threats, we need to expeditiously progress planned acquisition progress to be future ready. The required force levels of our submarines and strategy of their operation in the future are in accordance with the overall naval plans of countering threats to national interests close to the coast as well in distant waters. Most of our submarines have been modernised and upgraded in terms of their weapons-sensors suite as well as their crew-support system. The Indian Navy’s submarine arm is a potent force, fully capable of accomplishing a wide range of operational tasks.

Q/ Indian Navy's engagement has grown significantly in the recent past through its Mission Based Deployment. What is the Navy gaining from these?

A/ In order to protect and safeguard our national maritime interests in the Indo-Pacific region, the Indian Navy transitioned to Mission Based Deployment (MBD) in 2017. These deployments facilitated deploying mission-ready ships and aircraft to maintain continuous/ near continuous presence in critical shipping lanes and choke points across the IOR. Mission Based Deployments essentially cover all choke points, International Shipping Lanes of interest in the IOR and enable our ships to swiftly transform their roles from military to constabulary to diplomatic to benign, as required, and undertake a variety of missions from HADR to Anti-Piracy. These deployments have also provided opportunities for better interaction with our maritime neighbours.

Through these deployments, we are able to establish a visible, credible and responsive presence, augment Maritime Domain Awareness, monitor Extra Regional Forces and potential adversaries, and respond to emerging situations and crises in the form of military operations, constabulary intervention, opportune collaborative engagements with like-minded navies, etc. It has helped increase our familiarity with the area of operations and also helped assure friendly nations, through rapid response, that we are ready to assist when called upon. They have also significantly re-oriented fleet deployments, so as to pursue our neighbourhood-first policy. These deployments are in consonance with the prime minister’s vision of ‘Security And Growth for All in the Region’ (SAGAR) and our efforts to be the ‘Preferred Security Partner’ in the IOR. The initiative is also in sync with the latest UNSC presidential statement (under India’s presidency) on maritime security that recognised the importance of enhancing international and regional cooperation to counter threats to maritime safety and security.

Q/ Several women officers have gone to court accusing the Services of bias.

A/ The Navy has steadfastly proven that there is no gender discrimination between male and women officers at the recruitment, training or employment stage. The recent court case involving the Navy was with regards to whether the 2008 policy letter was to be applied retrospectively or prospectively and had nothing to do with gender discrimination. The apex court in its judgment dated March 17, 2020 held that the letter is to be applied retrospectively to both male and female SSC officers. Post judgment, the Navy concluded a Selection Board on December 18, 2020 wherein 80 officers (including 41 women officers) merited selection for permanent commission. We have employed women officers in combat roles such as pilots, observers and posted 29 women officers onboard warships, at par with male counterparts. The service conditions, infrastructure and resources are being upgraded to increase the intake of women officers in the Navy.