I was once mistaken for a baba during the Maha Kumbh, says Tarun Tahiliani 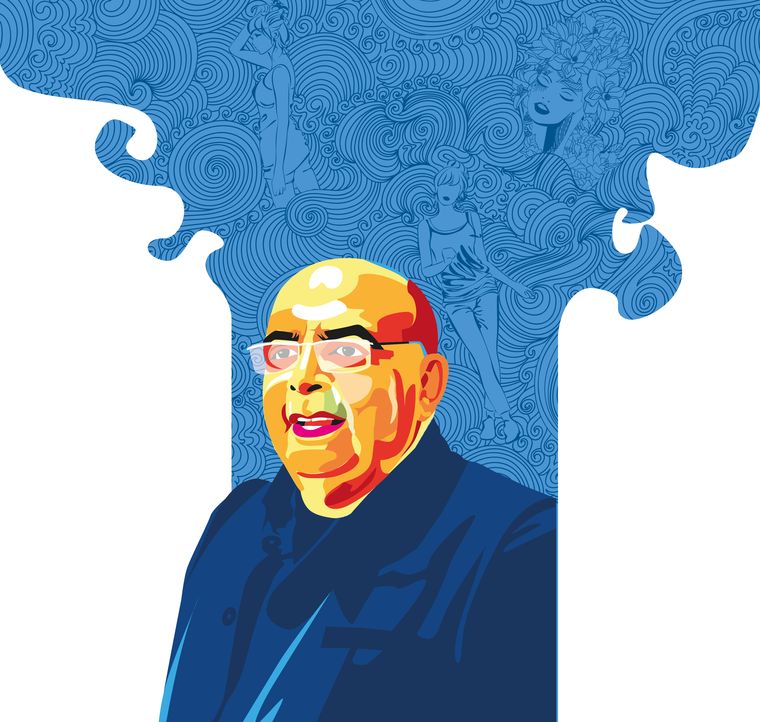 I have lived all over the western coast of India because my dad was in the Navy. Much later, when I was in college, he was posted as the Command Master Chief in Kochi. I went off to boarding school, just for stability. The Doon School was a fantastic experience and many of my closest friends even today are from there. Then I came back to Delhi and studied English for a year in St Stephen’s, but it was not what I wanted to do, so I went off to study abroad. I went to Vassar College in New York and then to the University of Pennsylvania to study, which was a difficult thing for my dad to afford since he was in the Navy, but because my mother was from a business family, they mustered together the money. When I finished in three-and-a-half years, my dad was becoming Chief of Naval Staff, so I had to come to India to take up the family business that he could not be associated with anymore. It was a machine tool business and I hated it. I was bored out of my skull.

I used to do a lot of creative things. I had always been interested in music and the performing arts, and hugely in drawing and painting. I won the best artist prize once in school and my English teacher came up to me and said: ‘Where do you think you are going to get in life drawing high fashion models?’ I said I don’t know. I just draw them because I like it. I think that was a very defining thing for the teacher to say because it just shows what a bias there was against fashion designing those days.

One day, this big fashion show by Pierre Cardin came to Bombay. My wife, whom I had met in college in New York, went to see if she could be an usherer or help out in any way, and she got picked to model in the show. And that is how I saw my first fashion show. I was fascinated. I thought: My God, I have always sketched, but I never knew this existed. It was lyrical, poetic, effortless, utterly beautiful. It really was perfection. I came back and sketched and sketched.

Simultaneously, my wife had started modelling. I accompanied her for a campaign she was involved in. There, this famous makeup artist Micky Contractor, Rohit Khosla—who was the designer in charge of the campaign and had just returned from New York—and I talked about how there was so little being done in fashion in India; there was so much talent that was going outside. We would see beautiful things abroad, but we couldn’t find anything in India. That night, my wife had the idea of starting a store to promote Indian design. Women in our generation were finally switching to jeans and dresses. Our family business had an abandoned warehouse space which we were given permission to use. That is how the idea of Ensemble was born, which was the first multi-designer store in India. It was a nice big space—bare, minimal and modern—and it was shocking when it opened. Everything was made in India and the clothes looked like they belonged in a gallery or a museum like the Metropolitan Museum of Art.

ON FALLING AND FINDING YOUR FEET Once, there was this big French festival in India with Yves Saint Laurent, who was a genius of his time. There would be a competition and they were going to take back three people—one designer, one model and one photographer—on a three-month exchange fellowship to France. I made it to the finals, but then there was some politics in Delhi. Someone was trying to get someone else in, and the French got cheesed off. So, they decided to take two models and drop the designer category. And I really went into depression. I thought, forget if I never got in, but is there really no Indian designer good enough to go even for an apprenticeship for three months? Finally, my wife told me to stop moping. “If you want to do it, then go and learn,” she said, and that is how I went to study design for a year at the Fashion Institute of Technology, New York. I would have otherwise fallen flat on my face. I was very lucky to have someone like my wife to push me and believe in me.

Afterwards, we decided to settle in Delhi in 1994-95. That is also when I did my first solo show. Since then, I have worked as a designer. It has been over 25 years. I am even more excited about it today, because you have a better understanding of technique and craft. You understand the markets more.

ON SEIZING THE MOMENT

That first big Pierre Cardin show in Bombay was a turning point in my life. Otherwise, I might have plodded on with what I was doing. It was never planned. My wife was also an economics major. Look at the sequence of events: We needed to make more money. She started modelling, which had never crossed her mind. We were then in the same shoot with Rohit Khosla, we all had a chat. Then I saw the show. Bang, bang, bang—three to four things happened and then carpe diem, you seized the moment.

As my mother always said, it is very important to build castles in the air because then, all you have to do is lay the foundation underneath it. A castle in the air is having a dream. Whatever it is you do, you can find ways to do it better—whether you are a driver or a person who works in a bank.

You have to take chances. Not everything has worked out. When we started Ensemble, we learnt a lot of things by falling on our faces because we were not educated in this field. And that is ok. Nothing ventured, nothing gained. There is no free ride. I have been at the Ambani house and seen Mukesh Ambani coming home at 1am in the morning—because he is working, even now.

One of the best collections I did was inspired by the Maha Kumbh. We were out on the field at 3am before the first procession started. Someone thought I was a baba and put me on top of this chariot. I was fanning some guru. It was quite hysterical. But the creativity of the people’s draping, the ash, the sadhu’s dreadlocks, it was mind-numbingly beautiful. If you had told me when I was 20 that one day I would be at the Kumbh Mela, I would have wagered my life that there was no way. Now, if you tell me I am going to the races in south Bombay I will equally wager that I am not going to go there. But that is what you know through age and experience about what tickles your mind.

MY ADVICE TO YOUNG FASHION DESIGNERS

Don’t think of fashion design as someone walking on the red carpet. You do it because you love going to the workshop every day. You design because you have got to design. A lot of the old cliches, however clichéd, are true. Because billions of people with wisdom, experience and compassion have lived before us. Usually things compiled over time are universal truths. You can go to the Metaverse or to the iPhone, but universal truths remain the same. You might tweak them this way or that depending on your predilection, but it will remain the truth.

So, embrace it and find yourselves.