I have been walking around with a letter of resignation, says Bibek Debroy

Economist opens up on his journey, belief in destiny and close brush with death 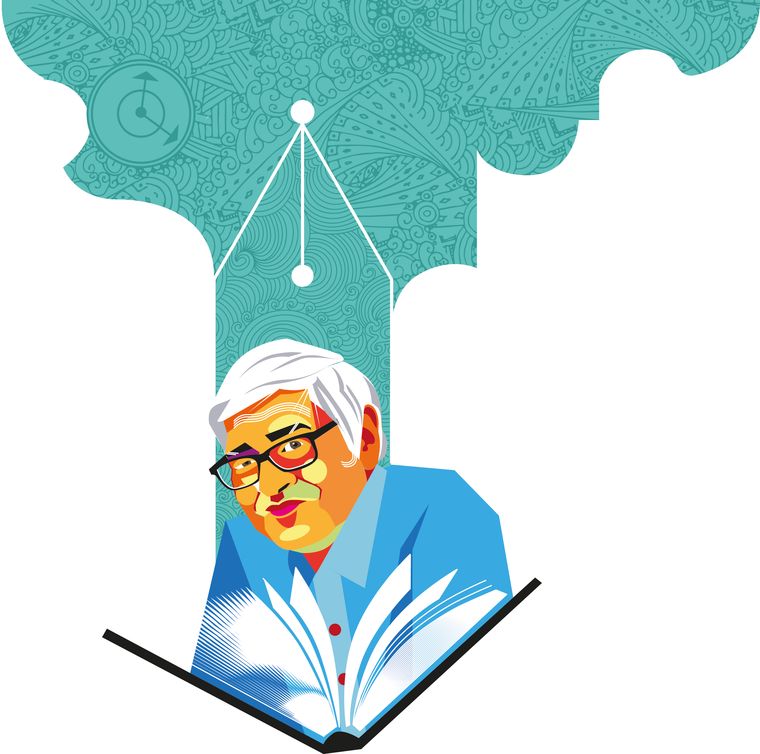 Quite often, when one talks about independence and the partition of the country, most of the discourse is about what happened in the western parts. On the eastern part also, partition was fairly traumatic. My family suffered as a result of this. They originally hailed from a part of Bangladesh that is called Sylhet. My grandfather moved just after independence in 1948. They walked around 20km to Shillong, which was then in Assam, where I was born. When they moved, they lost all their possessions and my father began his life as a lower division clerk in the government. At that time, my parents could not afford a proper public school in the British sense of education. Nonetheless, I studied in a western missionary school—St Peter’s in Shillong.

Then, in 1965, two things happened, both chance occurrences. First, I won a scholarship called the All India Merit Scholarship, which effectively took care of my education. The same year, my father was promoted to the Indian Audit and Accounts Services. Both of us, in our own way, got exposed to the wider world outside the insulated world of the northeast. Then I took the higher secondary exam. I wanted to study physics in Presidency College, Kolkata. The city was then in the midst of considerable left-wing turbulence. My parents denied me permission to study in Presidency, which was perceived to be the hotbed of turbulence. But I was adamant. We arrived at some sort of a compromise. My father said that I could study at Presidency on the condition that I studied economics and not science, which was perceived to be a bigger hotbed than other subjects. Economics, so to speak, was thrust upon me.

After Presidency, there was a choice as to whether I should study in Kolkata University or whether I should come to Delhi School of Economics. I chose to come to Delhi and went on to do a PhD in Cambridge. My supervisor was someone who was a very famous economist. Often, when you submit a dissertation for a PhD, you are asked to revise it. In a fit of juvenile anger, pride and insolence, I decided not to revise my dissertation. So, I returned with an MSc. I started to teach in Presidency College, Kolkata. Initially when I joined Presidency, it was on a short-term assignment for a period of three years. My life’s mission then was to become absorbed permanently in the department of economics. I was told in no uncertain terms that as long as the left front government was in power, there was no way I would get a job as a college lecturer in West Bengal. Purely by chance, I applied to the Gokhale Institute of Politics and Economics in Pune. V.M. Dandekar spearheaded it then. Till then, all I had learnt was theory—Game Theory, General Equilibrium Theory…. Gokhale Institute was very application based.

[After the Gokhale Institute, Debroy taught at the Indian Institute of Foreign Trade in Delhi. After several years at IIFT, he worked on the law reforms project, where he also did abridged translations of the puranas, the four vedas and 11 major Upanishads. Later, he joined as the director of the Rajiv Gandhi Institute for Contemporary Science. When NITI Aayog was formed in 2015, Debroy was one of its first members. Since September 2017, he has been the chairman of the Economic Advisory Council to the prime minister.]

This is a sketch of the series of accidents that have led me to where I am. Most of the things I planned for never happened. And most of the things that did happen are things I never planned for. For several years now, I have been wandering around with a letter of resignation in my pocket. Whenever I am unhappy, I promptly resign. It started from Presidency College in Kolkata.

ON MY BELIEF IN DESTINY

I believe in destiny and a higher power. Once you realise that many things are beyond you, you come to have a sense of detachment that all of this is temporary and that all of this will pass.

This is facilitated if you have a brush with death, which I had in January 2004. I had a misdiagnosed heart attack. I did not go to a proper hospital for 36 hours, so in some sense I should not have been alive. When you are there in the ICU, and you realise that you are at that point when you are not sure whether you are going to live or not, it is almost as if your entire life flashes before you. And you begin to ask: Who am I? What am I doing here? I decided that, if I survived, in that calendar year—2004—I was going to bring out 12 books. After that, I was going to opt out of the rat race. I would write what I felt like writing. I would no longer write simply because I wanted to be part of the rat race. That year, I actually published 15 books. Since then, I only write what I feel like writing, not because it is going to add to my resume.

I do not think what I have done with my life is something others should aspire towards or try to replicate. Sometimes people say that I am a role model. I would hate to become a role model, because my life has been a bit of a roller coaster, full of all kinds of strange decisions, unforeseen contingencies and unnecessary resignations. Some individuals are risk prone and others are risk averse. My life has been a series of risk prone decisions. When I resigned from IIFT, for example, several of my friends were aghast. What’s wrong with you, they asked. You’re settled till the age of 60. You’re going to get your provident fund, gratuity, pension.

When I resigned from IIFT, I had no idea what I was going to do. My life has not been a very calculated one. Had it been so, I would have done all kinds of things differently, beginning with not leaving Cambridge in a huff. Maybe my life has negative lessons, that you should not be doing what Bibek Debroy did. Those are stupid things to do. But do I have regrets over that? No. Because every time a window has closed, a door has opened. There are people who chip away at one single thing throughout their lives. There are economist friends of mine publishing in journals all their lives. I have not taken that path. Maybe that path was not meant for me. Maybe these chance occurrences led me down a different path.

The real lesson is not the lesson that is evidently the lesson—that people tend to look at the eventual outcome by whatever yardstick there is of success. What you never know or realise is the hard path one has to go through to reach that success. The path that I have chosen—or that has been chosen for me—has been very unpredictable and uncertain. I would not advocate that everyone choose this path. I think that life’s lesson really is that each one of us has a destiny. The fortunate few may realise this destiny.

ON THE INDIA OF THEN AND NOW

Younger people may not realise how difficult life was in the 1970s, because it was a shortage economy. I went abroad on a scholarship, but I would get that money only when I reached Cambridge. At that time, the foreign exchange permitted was around three pounds. My father asked me how I was going to reach from London to Cambridge with three pounds. So, I remember we had to make a trip to the Reserve Bank and get special permission. After all of that, we got some 70 pounds. My sons find this very difficult to understand. For a long time, I did not own my own watch. I used a watch I inherited from my father. It was not very easy to get watches those days. Unless you were returning from abroad, the favourite was, of course, the HMT watch. When I moved to Delhi in 1987, you had to wait for a year to get an MTNL landline connection. It was a shortage economy in every way. India today, by and large, is no longer one, certainly not for the manufactured goods which people tend to identify with. The days of smuggling are by and large over because the shortage is gone. India has developed so much.