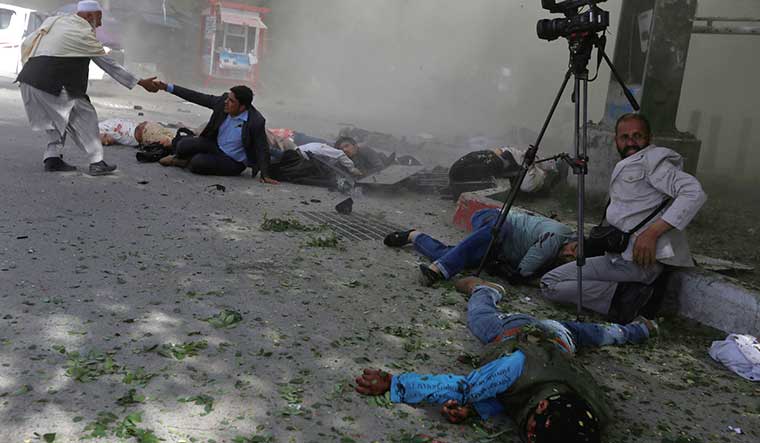 In the line of fire: Afghan journalists after a blast in Kabul | Reuters

Anya’s paper. That is the Novaya Gazeta’s street name. Brands would kill to develop that kind of personal bonding with consumers or readers. And someone did kill investigative journalist Anna ‘Anya’ Politkovskaya. Shot her down in her Moscow apartment exactly 15 years ago—in October 2006. She was never the editor of the Gazeta, but readers recognised that she had died for them, for their right to know the truth. And with the Gazeta’s editor, Dmitry Andreyevich Muratov, being named co-recipient of the Nobel Prize for Peace 2021, this recognition has gone global. Anya did not die for Russians alone. She died for us.

Having been closely associated with the International Press Institute (IPI) for several decades, THE WEEK has a much closer bond with Muratov’s co-recipient: Maria Ressa, editor of the Philippine news website, Rappler. She is a member of the IPI executive board and was the recipient of the IPI-IMS Free Media Pioneer Award 2018. The ipi.media website has a long running campaign page to support Ressa. She has been hounded so hard by the Philippines government that her counsel, Amal Clooney, said that Rappler had become a cautionary tale for journalists there. “Be silent, or you’re next.” She is facing at least “eight active criminal and administrative cases, which include tax cases, alleged violations of foreign ownership rules, and libel cases….”

Muratov, too, has an IPI link. He was the recipient of the IPI Free Media Pioneer Award 2009. I remember listening to him during the IPI’s World Congress and 58th General Assembly in Helsinki, Finland, in June 2009. While accepting the award, Muratov had asked for a moment of silence as “a tribute to Igor Domnikov, Yuri Shchekochikhin, Anna Politkovskaya, Anastasia Baburova and Stanislav Markelov.” He promised to exhibit the award in front of their photographs in the Gazeta’s newsroom.

Of the five he had named that day, Markelov was the only non-journalist. He was a human rights lawyer who had represented Anya. Baburova and Markelov were working together when they were shot down within minutes of each other, in different locations.

Both Ressa and Muratov are emblematic of the challenges faced by both legacy and new media outlets globally. In addition to contracts being put on journalists, cases being slapped against them and publications shutting down, the pandemic has claimed its share of the fraternity, too.

This May, the Network of Women in Media listed the names of 165 Indian journalists who lost their lives to Covid-19. In September, the Centre for Monitoring Indian Economy published the results of its survey which found that the media and publishing industry had suffered 78 per cent job losses in recent times. The industry which had employed over 10.3 lakh people countrywide in September 2016, CMIE said, employed only 2.3 lakh in August 2021.

Burnt out, hounded by governments, facing financial problems and family crises, many excellent journalists have unwillingly capped their pens and walked out of the newsroom forever. I mourn their departure, because they leave a lingering silence behind. But no reader or editor has the right to demand their return. It is as Muratov told his colleagues after Anya’s death: “No story is worth your life.” He was willing to shut the Gazeta down. It is another matter that the staff fought him to keep the lights on. They would not be silenced. It is that tribe that keeps journalism alive, exciting and truthful.

We who are in the industry would be the first ones to admit that there is no perfect reporter, no perfect editor or perfect publication. Just as there is no perfect father, mother or child. Yet readers expect perfection from news outlets, and it is their right to do so. It is not that expectation that hurts journalists deeply. It is readers’ apathy that does. This apathy has been magnified after readers have started inhabiting the echo chambers on social media. And this is not a new phenomenon as illustrated by a quote from Anya’s 2002 book on her reportage from Chechnya.

In A Small Corner of Hell: Dispatches from Chechnya, she wrote: “People call the newspaper and send letters with one and the same question: ‘Why are you writing about this? Why are you scaring us? Why do we need to know this?’ I’m sure this has to be done, for one simple reason: As contemporaries of this war, we will be held responsible for it. The classic Soviet excuse of not being there and not taking part in anything personally won’t work. So, I want you to know the truth. Then you’ll be free of cynicism.” The Gazeta’s print edition is published on Mondays, Wednesdays and Fridays, and this is what Anya’s newspaper has been trying to do—to make both readers and journalists free of cynicism.

As we meditate on Muratov’s and Ressa’s journeys, it is necessary to remember that there are thousands of journalists out there who struggle in silence until the world sees them. The IPI-IMS World Press Freedom Hero 2021, Yuliya Slutskaya of Belarus, is one such person. Founder of the Belarus Press Club and former editor-in-chief of Komsomolskaya Pravda v Belarusi, she was allegedly targeted by Alexander Lukashenko, president of Belarus since 1994.

She was jailed for eight months from December 2020 to August 2021—along with her son, cameraman Piotr Slutsky, the Club’s financial director, Siarhei Alsheuski, and two others. The Club was forced to shut down in July.

No one can remain unmoved by a letter Siarhei wrote from jail, jointly to his family and Slutskaya’s. He asked them not to worry, and imagine that all four of them were on a business trip in a second-class train wagon. It is a trip that no one wanted to make, he wrote, but they did not have a choice. And he reassured them that they would come back soon.

Speaking of journeys, Muratov’s birthplace, Samara, triggered memories of W. Somerset Maugham’s Appointment in Samarra. Samara city stands at the confluence of the Volga and Samara rivers in Russia; Samarra is by the River Tigris in Iraq.

The story begins with a merchant in Baghdad sending his servant to shop for provisions. Soon, the servant returns trembling saying that he met Death in the market, and that the apparition made a menacing gesture. Borrowing the merchant’s horse, he flees to Samarra, about 125km away, to cheat Death. Intrigued, the merchant went to the market, found Death and asked about the exchange with his servant. Death replied: “That was not a threat, I was only surprised to see him in Baghdad. I have an appointment with him tonight in Samarra, you see.”

Muratov and Ressa have given death the rain check many times, I am sure. For our sake, and for the sake of the freedom of the press, I will pray that they continue to do so.

—Philip Mathew, editor of THE WEEK, is fellow and former vice chairman of the International Press Institute, Vienna. 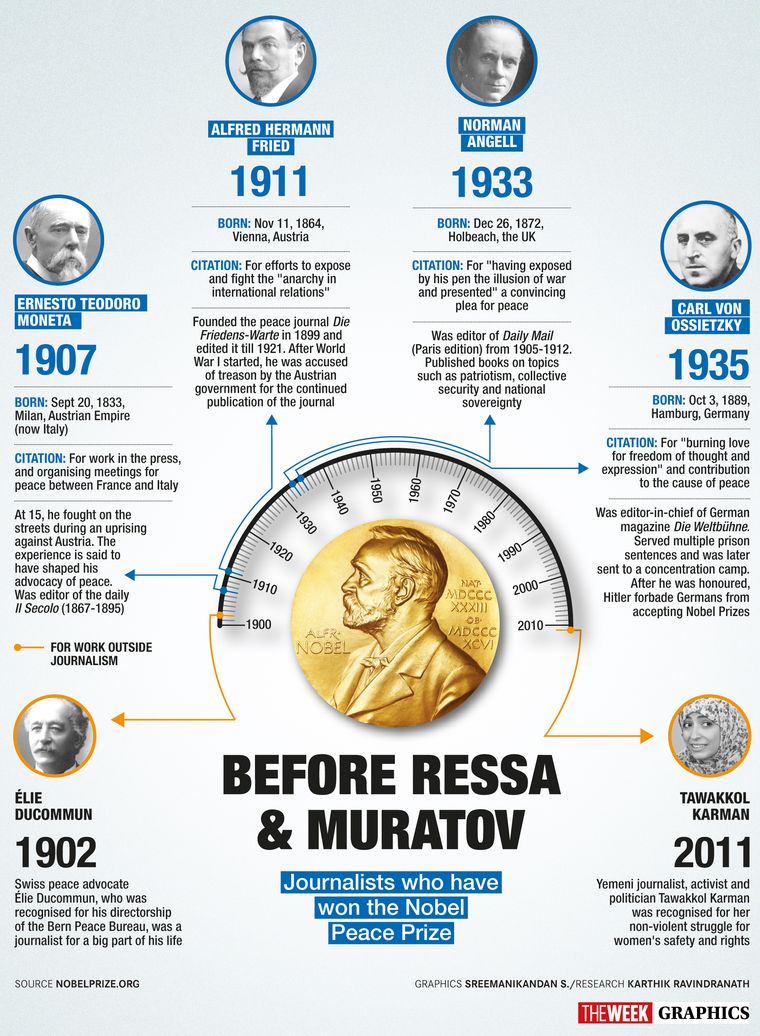