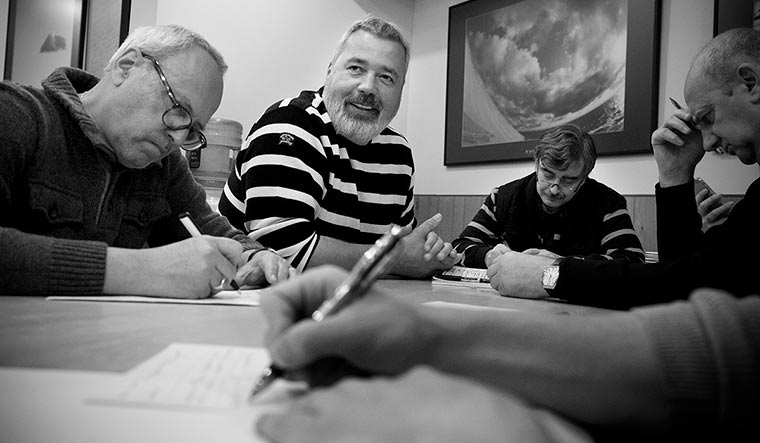 News and views: Dmitry Muratov with his colleagues at the Novaya Gazeta office in Moscow | Anna Artemyeva/Novaya Gazeta

On October 16 and 17, 2018, investigative journalist Denis Korotkov of the Novaya Gazeta newspaper received two unusual parcels. The first was a funeral wreath with a note attached, calling him a traitor to his country. What followed was even more bizarre—a basket with a severed goat’s head and a bunch of red carnations.

Korotkov was working on a story about the criminal enterprises of Yevgeny Prigozhin, an oligarch close to President Vladimir Putin. Said to be the man behind the shadowy mercenary force called the Wagner group, Prigozhin is on the FBI’s most-wanted list. The Novaya Gazeta published the story five days later.

It is this fearlessness that defines the Novaya Gazeta and its editor-in-chief Dmitry Andreyevich Muratov, who won this year’s Nobel Peace Prize, along with fellow journalist from the Philippines, Maria Ressa. But it has not been an easy journey for him. Muratov, 59, has lost more journalists to murder than any other Russian editor. Six of his journalists and collaborators have been killed in the line of duty. Muratov keeps their black and white portraits in the newspaper’s office, perhaps as a stark reminder of how dangerous journalism can be.

The first colleague Muratov lost was investigative journalist Igor Domnikov, who was beaten to death in July 2000, allegedly on the orders of a former deputy governor of the Lipetsk region in western Russia. Yuri Shchekochikhin was poisoned in 2003 while working on a corruption case involving officials from the Federal Security Services (FSB, a KGB successor) and the prosecutor general’s office. Lawyer Stanislav Markelov, who represented Muratov in the Domnikov case, was shot dead in 2009, along with young reporter Anastasia Baburova. Natalia Estemirova was kidnapped and killed in 2009, while working on a story in Chechnya.

The most noticed assassination was that of Anna Politkovskaya in 2006; she had documented human rights abuses by the Russian army in Chechnya. It was Muratov who used to cover Chechnya initially, and the quality of the coverage was one of the main reasons behind the early success of the new newspaper, which was launched in 1993.

The Novaya Gazeta was established by a group of young journalists who walked out of the Soviet-era newspaper Komsomolskaya Pravda. It was then edited by Muratov, a young graduate from the Kuibyshev State University in Samara who took up journalism after a brief stint in the Soviet army. He was opposed to the plan to convert the Pravda into a tabloid, and chose to quit along with like-minded associates.

Much of the initial financial support for the Novaya Gazeta came from former Soviet president Mikhail Gorbachev, who donated part of his 1990 Nobel Peace Prize money to buy computers for the new venture. One of those computers is still on display in the newspaper’s office.

The Chechen crisis broke out just a year after the launch, and Muratov covered the conflict extensively, explaining to his readers how the Russian military was using all available measures—legal and otherwise—to suppress the separatists.

“It was a major breakthrough for the fledgling newspaper. Muratov’s reports were widely noticed, especially by those who wanted to see how a post-communist government in Russia, led by the pro-western Boris Yeltsin, dealt with the separatists,” said Joshy M. Paul, international relations expert at the Delhi-based Centre for Air Power Studies.

The tradition was continued by Politkovskaya, who covered the second Chechen conflict. It was a brutal military offensive overseen by Putin, who had replaced Yeltsin in 1999. Politkovskaya made several powerful enemies, especially the Putin-backed Kadyrov family, which continues to run Chechnya to date.

She was shot dead by an unknown assassin in her central Moscow apartment building’s elevator on October 7, 2006. She continues to be a revered figure in the Novaya Gazeta. Her office has been left untouched after her death, and there is a memorial bust outside the newspaper’s Moscow headquarters.

“I think that the Nobel Prize rightly belongs to those who risked their lives and died doing their job,” Muratov told THE WEEK in an exclusive interview. Incidentally, the announcement of the prize came a day after the 15th anniversary of Politkovskaya’s assassination.

While the Chechen conflict helped the Novaya Gazeta establish itself as a credible news organisation, Muratov and his colleagues have also published “critical articles on subjects ranging from corruption, police violence, unlawful arrests, electoral fraud and ‘troll factories’ to the use of Russian military forces both within and outside Russia”, according to the Nobel Prize committee.

“Unlike most other newspapers in Russia, the Novaya Gazeta offered a critical take on controversial issues such as the sinking of the submarine Kursk (2000), the Dubrovka hostage crisis (2002), the Beslan school tragedy (2004), the Krasnodar floods (2012), the downing of flight MH17 (2014) and the Russian involvement in Syria, Georgia and Ukraine,” said Paul. When the Panama Papers scandal broke, the newspaper featured a seven-page report and also a large online version.

Nobody dares to question Muratov’s integrity and courage, but there is occasional criticism about his agenda and ideology. Some critics believe that giving him the Nobel Prize is possibly a “western agenda” to sell once again to the Russians the failed experiment with the “western liberal political system”, overseen in the past by Yeltsin.

“The Novaya Gazeta is the voice of western liberalism. It was relevant perhaps in the 1990s, but it is no longer important,” said Maria Rijova, a researcher at the Experimental Creative Center, a Moscow-based think tank. “The prize is meant to show which path Russia should take. Please don’t ignore the fact that Gorbachev, who, incidentally, is one of the owners of the Novaya Gazeta, too, got the prize in the past.”

While a majority of the Novaya Gazeta shares are owned by the staff themselves, Gorbachev and KGB agent-turned oligarch Alexander Lebedev, too, own a significant number of shares (see interview for details).

When Lebedev stopped bankrolling the operations in 2014, Sergei Adonyev, the former co-owner of the Russian telecom giant Yota, stepped up with financial support. Adonyev is close to Putin’s friend Sergei Chemezov, who heads Rostec, a state-owned defence industry corporation.

According to Proyekt (The Project), an independent investigative group, stories about Chemezov cannot be published without his approval, but Muratov has denied the allegation. Proyekt, meanwhile, was designated as an “undesirable organisation” and its journalists were declared “foreign agents”, a punitive administrative label that comes with crippling financial and bureaucratic burdens. The group was eventually shut down and its editor, Roman Badanin, was forced to flee the country.

One of Muratov’s star reporters, Pavel Kanygin, told The Moscow Times that the Novaya Gazeta was allowed to function as its top quality, unvarnished journalism, which is rarely found in the pro-Kremlin media, is useful to the authorities as well. He said it also allowed the authorities to tell the world that independent journalism exists in Russia. Muratov’s connections and the Novaya Gazeta’s image have so far shielded the newspaper from official retribution, especially the classification as “foreign agent”.

Muratov’s supporters, meanwhile, point towards the volume of work done by his newspaper and say that a working relationship with the higher ups at the Kremlin is the price to pay to keep independent journalism alive.

The Nobel Prize committee found that his independence is beyond reproach. “Despite the killings and threats, editor-in-chief Muratov has refused to abandon the newspaper’s independent policy,” observed the committee. “He has consistently defended the right of journalists to write anything they want about whatever they want, as long as they comply with the professional and ethical standards of journalism.”