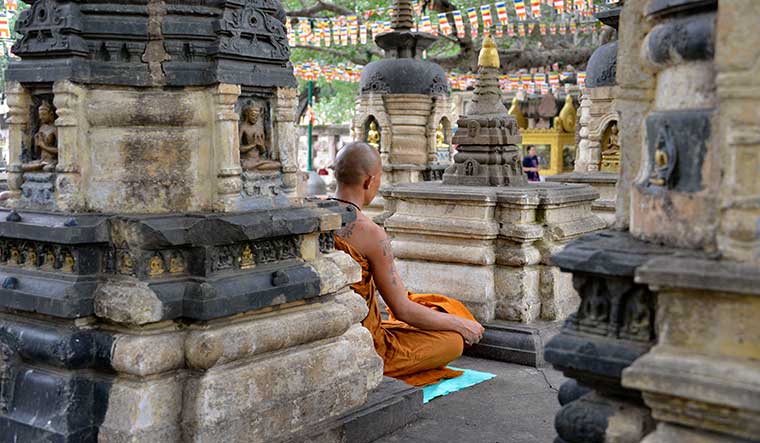 Breathing the buddha: a monk in meditation at the Mahabodhi temple, Bodh Gaya | Arvind Jain

Sir Edwin Arnold is not a name that comes to mind in Bodh Gaya. But the poet, and his popular poem Light of Asia—which inspired Vivekananda, Mahatma Gandhi, Jawaharlal Nehru, B.R. Ambedkar, Rabindranath Tagore, T.S. Eliot, D.H. Lawrence and Rudyard Kipling—is at the heart of reclaiming the temple for the Buddha at Gaya.

“The dispute [seeking the return of control of the temple from Hindus to Buddhists] got triggered by Arnold’s visit to Bodh Gaya in February 1886,” says Jairam Ramesh, who has written The Light of Asia: The Poem that Defined the Buddha, a book on this epic bio-poem on the Buddha. The poem was instrumental for the “discovery” of Indian Buddhism for the west. Arnold taught in India; in London, he was the vice president of the West London Food Reform Society that promoted vegetarianism. Gandhi was the secretary of this society while he was a law student in London.

“It is at Buddha-Gya, that ‘most hallowed spot where, under the Bodhi tree, the sun of truth rose for Prince Siddhartha’, that Arnold feels the most depressed and anguished,” writes Ramesh in his book. “Then he uses a term for it which would cause endless political controversy for the next half a century and more. He calls the shrine ‘the Mecca of Buddhism’….”

About the temple being used as a Shaivite shrine, Arnold wrote: “While the granite floor was carved with votive inscriptions and desecrated in the middle by the Brahmans who have usurped the place… Buddha is unknown and unhonoured upon his own ground by Shaivites...” 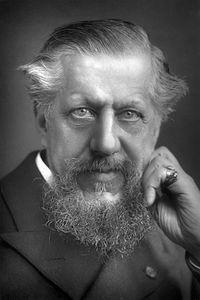 Sri Lankan Buddhist revivalist Angarika Dharmapala visited Gaya in 1891. He was shocked to see the place and started a campaign to reclaim the temple as well as those shrines in Sarnath, Sanchi and Kushinagar. If Ashoka brought Buddhism to Sri Lankan shores, Dharmapala in the 20th century tried to revive this legacy in India. This movement came at a time when the west was discovering India’s role in Buddhism through Arnold’s writing and archaeologist Alexander Cunningham’s excavations.

“It is an important milestone in the rediscovery of Buddhism in India,” says Ramesh. “Its moving spirit was Dharmapala. But supporting Dharmapala was Colonel Henry Steel Olcott of the Theosophical Society and, of course, Arnold who was part of the initial group. He was also encouraged by many Bengalis, influential editors and influential men of that period.”

There was also a woman: Mary Foster, the first Hawaiian Buddhist. It was with her donation of Rs63,606 that a vihara was constructed in College Street in Calcutta in 1916. The relics found in the Buddhist site in Bhattiprolu, in Andhra Pradesh, were handed over to the Mahabodhi Society of Dharmapala in 1916. The temple at Sarnath was also built with her funds.

The revivalist movement also found powerful patrons among Hindu intelligentsia. Leaders like Jawaharlal Nehru, Gandhi and Shyama Prasad Mookerjee came together to fight for the Buddhist cause. It is perhaps the only instance of Nehru and Mookerjee ever being part of the same movement. Mookerjee would go on to form the Jan Sangh movement and is today an icon for the BJP.

“Initially, the Mahabodhi Society was to recover the Mahabodhi temple [at Bodh Gaya] for the international Buddhist community,” says Ramesh. “But over the years, the society took up an expanded role. There are three great contributions of the Mahabodhi Society: the temple at Bodh Gaya; Dharmapala’s work to revive Sarnath and the whole effort to re-establish the glory of the place; launching of a journal for Buddhism, and enabling discoveries not only in the sub-continent but in the world.”

Despite the controversy, the agitation for reinstating the Buddha as the principal deity in Bodh Gaya was a peaceful one. “It must be said that for 200 years, there is a record of both Hindus and Buddhists worshipping at Bodh Gaya,” says Ramesh. “But for Arnold who is a westerner, he called Bodh Gaya, the Mecca for the Buddhists. I am not sure that the Buddhists considered it to be Mecca, but Arnold did. I also think that when Arnold went, he was completely blind to the fact that this was a sacred space, and people of multiple faiths congregated there. This is the uniqueness of Indian sacred spaces.”

The dispute finally got resolved through dialogue. “It was resolved largely by the intervention of Gandhi. Rajendra Prasad, Shri Krishna Sinha and Nehru also played a role,” says Ramesh. The Mahabodhi Society becomes the interlocutor for the Buddhists, and the resolution of handing over control of the temple from the Shaivite mahant to a committee—of equal Hindus and Buddhists—still holds. Even today, the ceremony has two priests chanting to two different deities, praying for peace. “Interestingly, the day the control passed from the Shaivite mahant to the new managing committee [in 1949], verses from Light of Asia were recited,” said Ramesh.