India should share its ancient knowledge with the world: The Dalai Lama 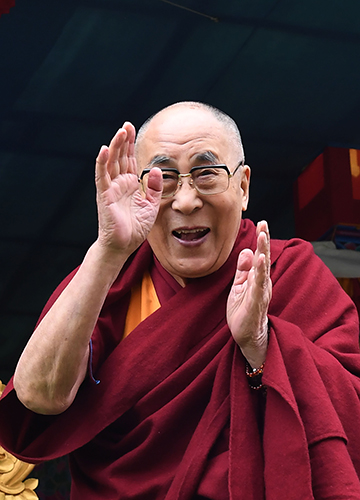 The Buddha’s teaching is essentially practical. It is not just for one group of people or one country, but for all human beings. People can follow this path according to their ability and inclination. I, for instance, started my Buddhist education as a child, and although I am now 86, I am still learning. Therefore, whenever I can, I encourage Buddhists I meet to be 21st century Buddhists, to discover what the teaching really means, and to put it into effect. This involves listening and reading, thinking about what you have learned, and making yourself deeply familiar with it.

Although our world has changed a great deal since the time of the Buddha, the essence of his teaching remains as relevant today as it was 2,500 years ago. Both the Pali and Sanskrit traditions possess methods for attaining liberation from ignorance and suffering. The Buddha’s advice, stated simply, is to avoid harming others and to help them whenever you can, in whatever way possible.

We can begin to do this by recognising that everyone is just like us in that they want happiness and wish to avoid suffering. Seeking joy and freedom from suffering is the birthright of all beings. Our personal happiness very much depends on how we treat others. By developing a sense of respect for one another and a concern for each other’s welfare, we can reduce our own self-centredness, which is the source of many of our problems, and enhance our feelings of kindness, which are a natural source of joy.

The Buddha declared: “The Enlightened Ones do not wash unwholesome deeds away with water, neither do they remove the sufferings of beings with their hands, nor do they transplant their own realisation into others. It is by what they teach, revealing the truth of suchness, that they liberate beings.”

Buddhism is just one among the many religions in the world. What is unique about it is that the Buddha counselled his followers not to accept what he said at face value, but to examine his words as a goldsmith analyses the quality of gold. All religious traditions teach the importance of love for our fellow beings, but the Buddha also encouraged his followers to scrutinise what he taught and to take it to heart only when they understood it to be reasonable and beneficial.

The Buddha gave us a rational method to counter those factors which, rooted in our self-centred attitudes, disturb our peace of mind. The ancient Indian practices of compassion and doing no harm—karuna and ahimsa—are not limited to physical conduct, they have to do with our mind. We harm others in various ways because our minds are undisciplined. In Buddhism we say, a disciplined mind is happiness while unhappiness is an unruly mind.

Buddha Shakyamuni lived in India and what he taught was subsequently preserved in great centres of learning like Takshashila, Vikramashila and Nalanda. In the seventh century, the Tibetan emperor chose to design a Tibetan form of writing modelled on the Indian Devanagari alphabet. A century later, the then Tibetan ruler invited a great philosopher and logician, Shantarakshita, from India to introduce Buddhism to Tibet. He promoted the translation of Buddhist literature—the Buddha’s actual teachings as well as the treatises of Indian masters who came after him—into Tibetan. This is the basis of the tradition that we continue to keep alive today.

Shantarakshita introduced a comprehensive presentation of the Buddha’s teachings, one that relied on the exercise of reason and logic and encouraged analysis of what was written in the scriptures. It is an approach that is now preserved only in the Tibetan tradition. Rigorous study is a process that I, as a monk, have followed from an early age. I began by memorising texts which I studied, reflected on and then worked at gaining experience in meditation. 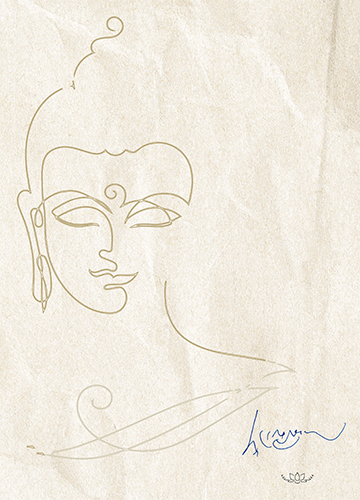 Tibetans have been custodians of this tradition for more than 1,000 years. We can say that historically Indians were our teachers, but since then, we the disciples have kept the tradition alive. So, it stirs special feelings in me today to be able to discuss with my Indian brothers and sisters what the Buddha taught.

Something that distinguishes the Indian spiritual traditions from others is that they include a thorough understanding of the workings of the mind and emotions. After the Buddha embarked on the homeless life, he trained in the prevailing contemplative practices of shamatha and vipashyana—concentration and insight. On the basis of this, he engaged in six years of austerities, during which he fasted and engaged in deep meditation. As a result, he attained enlightenment.

Soon afterwards, he is said to have expressed these thoughts: ‘I have discovered a nectar-like truth that is profound and peaceful, free from elaboration, uncompounded clear light. Yet if I were to teach it, no one would understand; therefore, I shall remain silent here in the forest.’

When, shortly afterwards, he did begin to teach, he explained the Four Noble Truths. Later, at Rajgir, in his second round of teachings, he taught the Perfection of Wisdom. In explaining shoonyata (emptiness), the Buddha demonstrated that, despite appearances to the contrary, nothing exists independently from its own side. Despite appearing to do so, things have no objective existence. The Perfection of Wisdom was not taught publicly, but to a select group of disciples.

Subsequently, Nagarjuna, founder of the Madhyamaka school of thought, and followers such as Aryadeva and Chandrakirti wrote extensively on what the Buddha had to say about ‘emptiness and dependent arising’. One consequence is that, many years ago, the great Indian physicist Raja Ramanna told me that when he read one of Nagarjuna’s works, he was struck by how much of what he had written corresponded with the modern view of quantum physics. He told me that as an Indian he felt proud that Nagarjuna had anticipated such modern developments with no instruments but his mind to help him.

At the time of the Buddha, people lived in small, relatively isolated communities. They had no sense of relations with the wider world. Now, we live in a global economy and technology has reduced the distances between us. This reality is teaching us that we must all work together.

In the past, Indians were our gurus, now the time has come for India to share its ancient knowledge with the rest of the world. It will be necessary to present ancient Indian knowledge in a secular, academic way. Adopting a secular approach, treating all spiritual traditions with respect, has been an exemplary Indian tradition.

Individuals cultivating peace of mind create a more peaceful society, which, in turn, contributes to a more peaceful world. We all want to find joy. We depend on hope, which is the pursuit of something good. But to succeed we need to use our intelligence properly. Real happiness depends, not on sensory awareness, but on the mind itself—the key is to establish peace of mind, and for that we must understand the system of mind and emotions. I believe that if we make an effort, cultivating a proper appreciation of the oneness of humanity, we can create a happier, more peaceful world.

When I first came to India, I reflected on the close links between this country and my homeland, Tibet. As the honourable prime minister has said, India is the land of the Buddha. The ultimate purpose of Buddhism is to serve and benefit humanity. I believe that, whether we consider ourselves Buddhists or not, we can all benefit from adopting the tried and tested principles of karuna and ahimsa as the basis for creating a happier, more peaceful world.