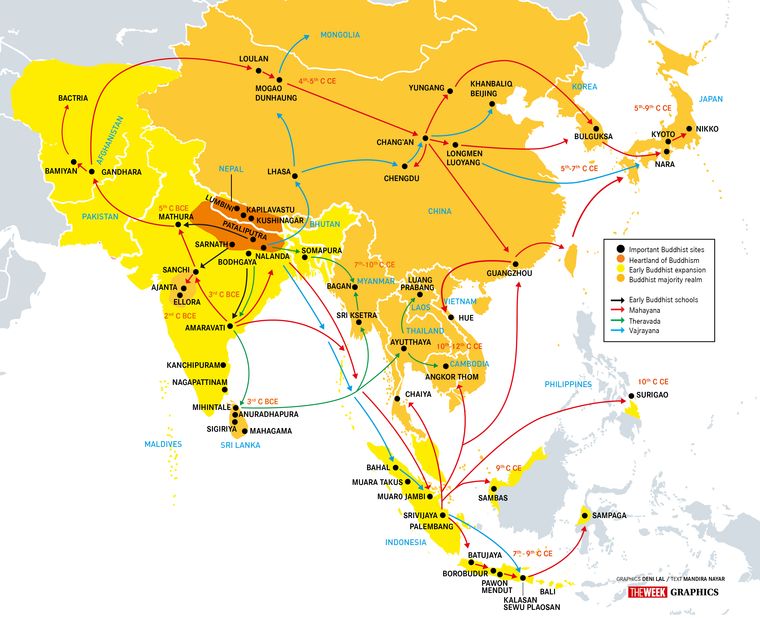 * Much before the Taliban blew up the Bamiyan Buddhas in 2001, the site had fallen into disuse

* In 1969, a team from the Archaeological Survey of India began a conservation project that would last seven years

* The location is yet to be identified, but both countries claim it

* India has been involved in multiple digs. Excavations in 1899 and 1961-1962 are said to have suggested that Kapilavastu was in Nepal

* But, an excavation in Piprahawa, Uttar Pradesh, in 1970-1971, suggested the city could be in India

* In Bagan, the ASI has preserved the Ananda temple, which has the largest collection of Jataka tales (an MoU was signed in 2010)

* ASI has also compiled a list of significant buildings in the area, and began work on five buildings in 2020

ASI has been at the heart of excavations to find remains in Kuramathi, Todd and Nilandhe atolls

ASI carried out preservation of murals in the late 1980s

LAOS
India has invested $2.4 million in the Vat Phou Hindu temple, which was also a Buddhist shrine in the 13th century