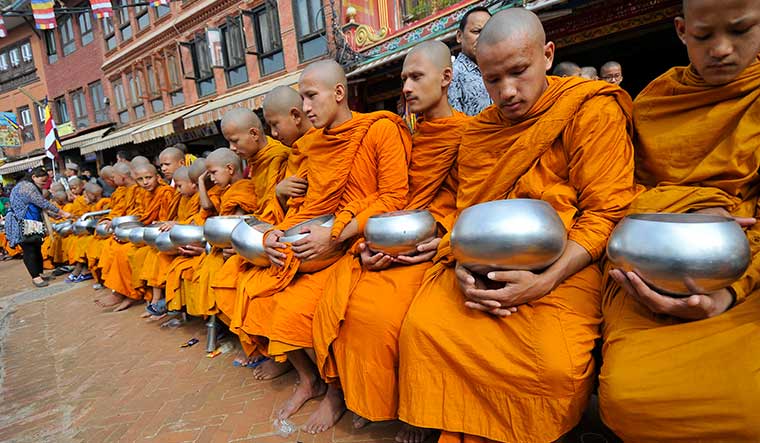 Celebration of faith: Devotees offering holy grains and money to Buddhist monks at the Boudhanath stupa in Kathmandu | Getty Images 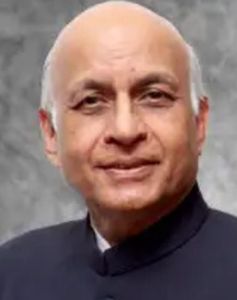 Ashoka desired to be the chakravarti, the supreme conqueror, and he was determined to add the kingdom of Kalinga, a powerful maritime state, to his empire. He invaded Kalinga and fulfilled his geopolitical ambitions. But, witnessing the brutality and human suffering of the Kalinga War, he underwent a deep spiritual transformation and converted to Buddhism.

Through his evangelical efforts, Ashoka transformed Buddhism from a local faith into an international religion. Kalinga, or Odisha, became Ashoka’s platform to promote Buddhism overseas. Although his focus was Sri Lanka, he sent religious emissaries across the known world—from ancient Greece and Egypt to southeast Asia, then known as Suvarna Bhumi. In the centuries after Ashoka, Buddhism spread further east to China, Korea and Japan.

Buddhism has remained a powerful cultural force. The Indo-Pacific is today the geopolitical centre of gravity; the dominant powers of the region being the Buddhist nations, that is, China, Japan, Korea and almost half of ASEAN.

The questions, however, being raised today are: can India revive the international role that Ashoka had established? Can it reclaim the Buddhist legacy after eight centuries of neglect?  Can India deploy Buddhism for projecting its soft power?  Has any leader attempted to do so?

Pandit Nehru was secular to the core, but was drawn to Buddhism. He kept an image of the Buddha next to his bed.  It was he who suggested the idea of the Buddhist dharma-chakra for the national flag, as also the three lions (actually four), of the Ashokan pillars as the state emblem.

The Pancha Sheela is a Buddhist spiritual concept, but Nehru adapted it as a model code of conduct among nations. Even the policy of nonalignment was a reflection of the Middle Path advocated by the Buddha.

In his vision of geopolitics, Nehru seemed to sacrifice Tibet, because it came in the way of a larger objective, that is, an equal partnership with China.  The rest of the story is known.

A modest revival of Buddhism has already taken place in India. There are an estimated 10 million Buddhists in the country, most of them being dalit converts and followers of Dr B.R. Ambedkar.  As with Ambedkar, their priority is not Buddhist theology, but a recognition of their social and political rights. Buddhism, for them is a symbol of dalit power.

Buddhism: A strategic asset?
The idea of Buddhism as a geopolitical asset has been around for a while, but has made little headway in Indian strategic circles, especially in the ministry of external affairs. It is tempting to think that Buddhism can enhance India’s soft power and expand its political influence in the Indo-Pacific, where the important Buddhist nations are located.
It could also be a strategic weapon against China, especially in the form of a Tibet card. A bid for global Buddhist leadership by India implying support for the Dalai Lama and the Tibetan cause will be a powerful initiative, which can unnerve the Chinese leadership.

China specialists within the government have dismissed this as a dangerous concept as it would invite fierce hostility and pressure from China.  Lately, however, the winds of change are swirling in the corridors of South Block.

Modi and Buddhism
Among all the prime ministers of India, Narendra Modi stands out for giving unprecedentedly high prominence to Buddhism in his public discourse. He seems to have come tantalisingly close to declaring it as a strategic asset.

In August 2014, at an India-Japan summit meeting in Tokyo, Modi and Japanese prime minister Shinzo Abe announced the launch of a dialogue to explore the shared civilisational heritage of India and Japan. One of the outcomes of this initiative was a series of Hindu-Buddhist conclaves on common links and their relevance to contemporary challenges.  It appeared as if Modi was attempting a formal reconciliation after a thousand-year Hindu-Buddhist rivalry in India.

Addressing a number of international Buddhist gatherings in 2015, Modi declared Bodh Gaya as the spiritual capital of Buddhism. At a prayer meeting, under the sacred Bodhi tree in Bodh Gaya, he even confessed that he felt like calling the country ‘a Buddhist India’.

In April 2016, Modi launched a campaign in which Buddhist monks were directed to travel all over Uttar Pradesh to spread the message of the Buddha and Ambedkar. Modi appeared to be shaping Buddhism both as a political instrument to win the support of the dalits in India as also a global strategic initiative against China.
By mid-2016, Modi’s enthusiasm had all but disappeared. A nasty spat with Nepal over the policies of the then prime minister K.P. Oli had frozen all bilateral communications. Oli announced an official international celebration of Buddha Jayanti, on May 21, 2016, and formally invited the president, the prime minister and other dignitaries of India to join as guests of honour.

The government of India pointedly ignored this and made it known that no leader or official from India should be seen there.  To cut the story short, thanks to this pique, India’s rightful place in this historic event was promptly seized and taken over by China. At Lumbini, with the president, prime minister and all former prime ministers of Nepal seated at the podium, I found myself the solitary Indian to be invited to address the gathering.

By July 2016, there was another significant setback to India’s global Buddhist ambitions—the collapse of the International Buddhist Confederation (IBC), which had been supported and nurtured by India since 2011.

Encouraged by the response to an international Buddhist conference in Delhi in November, 2011, a decision was taken to establish the IBC as a permanent body, with headquarters in India. I was invited to join the IBC in 2013 as a member of their executive committee, as chairman of the Global Outreach Committee and as a global ambassador for Buddhism.

The second global Buddhist conference, held in September 2013, was an unbelievable spectacle. The Ashoka Banquet Hall was a sea of saffron and crimson, overflowing with Buddhist representatives from nearly 50 countries.  The who’s who of the global Buddhist Sangha was there—the Lamas, Bhikkus and Bhantes, the Theras, the Mahatheras, the Mahanayakas and the Rimpoches, from all branches of Buddhism, from Theravada to Mahayana and Vajrayana. The most eminent international personalities associated with Buddhism were all there. The only exception was the Dalai Lama. Bearing in mind the fierce condemnation by China over his presence at the earlier conference, he discreetly stayed away.

In the following years, the IBC went from strength to strength, gathering enthusiastic support from Buddhists the world over, especially from southeast Asia, Europe and America.  Then, in 2016, the IBC imploded as mysteriously as it had emerged. It has since receded from public view. This is particularly tragic as a brilliant and seemingly successful initiative to reclaim the leadership of the global Buddhist heritage, has come to an untimely end.