Web exclusive: Nalanda is still a ghost of the past 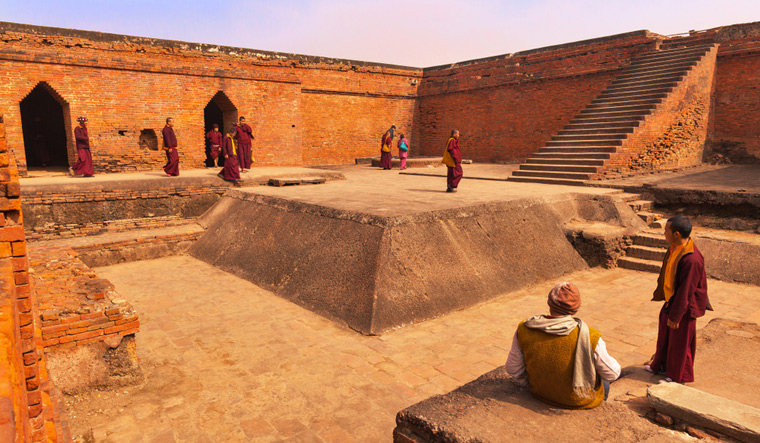 It was not easy to get in. Much before entrance examinations—or certainly before impossibly high cut-offs became the norm—the Nalanda University had a vetting system. Perhaps, even the first.

Hsuan-Tsang or Xuanzang, as he is now known, travelled to India and wrote about how admission was based on learning. Only 20 to 30 per cent of the candidates passed. Being a scholar, he was admitted.

With its cult-like fame—much before the time of advertisement or social media—Nalanda, was the reason that Chinese scholar Hsuan-Tsang chose to make his journey across mountains and a desert to find the source of true knowledge and study here.

He wrote: “Finally, I found Nalanda hidden as a jewel under the thick mango groves.”  He said that “learned men’’ who desired to quickly “acquire renown in discussion’’ came here. There were students from Indonesia, Japan, Persia and even Turkey.

His description of the university might be the most vivid, but it is not the only account. It is certainly very lyrical and offers just the scale. The priests were always to reach the number 10,000. (Later scholars believe the number is exaggerated).

There was certainly freedom to think on the syllabus which included the 18 rival sects of Buddhism, the Vedas or the works on “magic’’. He described the university at its zenith. “The richly adorned towers, and the fairy-like turrets resembling pointed hill-tops, are congregated together…’’

He created an image of peace, almost off Instagram, of deep translucent ponds with blue lotuses—which still continue to dot the area, intermingled with Kanaka flowers of deep red and groves of trees.

But more than just its setting, Nalanda—and its myth, including its resurrection in modern times as a reach out to the east under the ministry of external affairs—is tied up with it being a magnet for talent. It became a place where the learned came—not for a brand—but for a discussion. Fa Hian and I-tsing also travelled to Nalanda. (The Chinese emperor Wu-ti sent a mission to Nalanda in 539 BC) It figures in Tibetan and Jain accounts too.

It did attract the best talent. Padmasambhav, teacher from Swat who introduced Buddhism to Tibet, 6th century’s Dinnaga, credited with founding logic as well as 7th century’s Dharmakriti who founded the primary theory of the Buddhist atom. What is certain is that its fame continued for centuries.

Discipline was certainly the order of the day. In the descriptions of life on the campus, it seems that there were strict rules. There were about 100 pulpits for preaching and the students had to attend, without fail. The teachers themselves had a code to live up to and there had been “no single case of guilty rebellion’’ he noted. Since he had left without the blessing of the emperor, in a fit of rebellion himself, this is an important detail for him.

Academic scholarship was high. The pupil, after he attends to the service of the teacher, reads a portion of the scripture and reflects on what he has learnt. He acquires new knowledge each day and “searches’’ old subjects’ month after month without losing a minute. Great emphasis was paid on singing and chanting. And I-tsing wrote on physical exercise, too—walking hours were instituted in the morning and the evening.

Nalanda was also not the only learning centre. Taxila also flourished among others. It, however, had a great library. Tibetan sources including Taranatha, described it as three stories filled with books on medicine, astronomy, astrology, theology, philosophy, literature, city planning and even law. The setting fire to the library by Bakhtiyar Khilji in the 13th century—the fire continued for days, equivalent to the destruction of the library at Atlantis—is believed to be the final end.  This was not the first attack. But Nalanda did continue. In Nalanda, I think the story is incomplete because we don’t look at Tibetan sources,’’ said historian Himanshu Prabha Ray. “The sources talk about Tibetans coming, reviving Nalanda and setting it up. That story is lost to us because that is something we have not considered.”

Tibetan sources claimed that monks rescued books and in 1235 Dharmasavin visited a 90-year-old Rahula who was teaching 70 students. But it was never the same.

Under former prime minister Manmohan Singh there was an attempt to restart it. This time under Amartya Sen, the renowned economist, but a decade later, the experiment has failed to find success. Nalanda is still a ghost of the past. And its resurrection in modern times and its demise in the past gets tangled up with history—and the recent attempts for it to be viewed through the lens of ideology. Can it rise again?