Web exclusive: How British explorers helped put India back on the Buddhist map 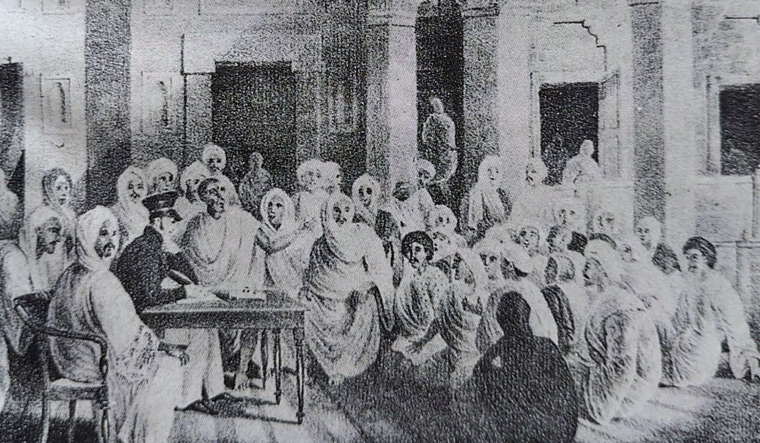 The story of Buddha has an English link. The Orientalists—much before it became shorthand for only the exotic—were men who came to India to build railways, do desk jobs but became obsessed with discovering India. They spent their lives to read the languages, working out the history of kings—many, most oddly died tragically—and are credited with not only finding Ashoka but putting India's prominence back into the Buddhist map.

“In the early decades of the nineteenth century, there was considerable confusion and debate among Western scholars on a number of issues—the place of origin of Buddhism, the historicity of the dates of Gautama Buddha, whether or not Buddhists had a history before Gautama and the relationship between Buddhism and other philosophical doctrines and religions of India,” writes historian Upinder Singh in Discovery of Ancient India: Early Archaeologists and the Beginnings of Archaeology.

It is the knowledge of ancient languages, together with coins, excavations of stupas that lay buried—hitting history in the course of surveying roads or building railways and stumbling on caves like lieutenant James Alexander who went for shikar to the hill of Aurangabad in 1824 to discover Ajanta hidden in a forest. All this formed the first pieces of the ‘discovery’ of the Buddha story in India in the 19th century for the West. It was for a while the answer to the greatest mystery in modern times.

The evidence existed, but in languages that had not been accessible for a while: Brahimi and Koshati. Buddha's revolution had been tamed in the all-encompassing and absorbing Hinduism. (Bodh Gaya was a Vishnu temple, with the tradition of the two priests offering prayers). The story of Ashoka and his public proclamation of Dharma was in a script that had been forgotten or how central India was to export this powerful idea of salvation. It was the British that established for the world the GI tag, much before that concept ever existed.

It was a puzzle to be solved by men who were posted in India with different day jobs. Colin Mackenzie, the surveyor general of India, stumbled upon Amravati, a Buddhist site that spanned centuries. His collection was acquired by the East India Company at the highest price. He was “single-minded using his purse and position to secure…every curio that came his way’’ writes Charles Allen in Buddha and the Sahibs or ensuring a sketch for everything that couldn’t be carted away.

There is also captain Fell who, probably on another spot of shikar marching north towards Gwalior, saw a cluster of mounds. He noted what was published in the Calcutta Journal in 1819, “On a table of land of a detached hill, is an ancient fabric of a hemispherical form, built of free-stone...’’ The monument, as he called it, is known as Sanchi. Then, there is Ventura serving in the Ranjit Singh court who dug up Jean-Baptiste Bactrian coins in stupas in Peshawar.

But more than just the accidental discoveries, it was the rigorous pursuit of unravelling the mystery of the polished stone pillars of Ashoka that provided the link of the origins of Buddhism in India. “It is extraordinary for us today, to realise how quite much of the Indianness of Buddhism had been forgotten by the 19th Century,’’ said well-known historian William Dalrymple.

“Buddhism grew out of Indian culture and as Buddhism travelled to Asia, it brought with it a huge range of different kind of learning, forms of civilisation, art and culture. But by the 19th Century, the centre of Buddhism had moved out of east of India. It was only through the work of men like Charles Masson and James Prinsep, who translated for the first time to read, in 1,000 years Brahmi and Khorasti, that revived the knowledge that Buddhism was an Indian religion and central to Indian culture and civilisation.”

Prinsep—who died young at 40 from overwork—who had a day job at the Mint, painstakingly deciphered the Ashokan script. Once the code broke—he did have help from others—it opened up a new world. It was through his code-breaking that the Ashokan edicts could be read. He transformed the Asiatic Society, which under him, became an intellectual hub. He was also mentor to Alexander Cunningham, who has first dibs on digging up Indian history.

But he couldn’t have done it without help and people like Charles Masson. Masson was the first to leave a mark on the Bamiyan Buddhas. Literally. In the 1930s, when a French archaeological delegation in Afghanistan went to the caves, they found scrawled above the Buddha “If any fool this high samootch explore”. Charles Masson has been here before, making his the first what could have been one of the earliest instances of graffiti. But Masson was more than just a marker of monuments.

An explorer, archaeologist and intelligence agent, as the British Museum describes him, Masson truly lived a thrilling 'binge-worthy series' kind of life. He was imprisoned as a spy. Born James Lewis in 1800 in London, he headed to India to enlist in the Bengal Artillery in 1822, only to desert five years later. He chose to create a new identity, and thought was an American born in Kentucky and went off to explore edges of the Empire straight out of a Le Carre novel, existing in the shadowy espionage world.

He was hired by the British East India Company and Bombay Government to excavate and record finds in Afghanistan. In his stint, he excavated 50 Buddhist sites in the Kabul-Jalalabad region. He also collected a stash of 60,000 coins—demonstrating the extent of the spread of Buddhism in the 1st Century CE—linking India’s history with Afghanistan’s forever, much before the advent of Islam.

He is also credited with discovering the gold casket from Bimaran Stupa—now the pride at the British Museum—which is considered one of the earliest images of the Buddha. The coins would play a major role in helping reconstruct the political history of the Kushans and the Gandhara dynasty that are today credited with the most recognisable face for Buddha. By studying the coins, Masson discovered that the Greek legends were written on the observe coin in reverse script, which was the key to unlocking a different language, Kharoshthi. Masson, died almost penniless, back in Britain.

The decoding aside, it was Cunningham, with his careful excavation of the past, who helped make sense of the remains. He excavated the stupas—Sanchi, Sarnath—and is credited with the exact location of Taxila. He also found the reliquaries of important disciples of the Buddha that altered history forever.

Considered the father of Indian archaeology, Cunningham's contribution to the field looms large.

While the role of the English in piecing together the complex jigsaw of the Buddhism story for the West has now largely been acknowledged, the Indian scholars, who often worked quietly on the margins, are still to find a place. It is a notion that Indian historians like Singh are hoping to reconstruct again.

“The great discoveries and the breakthroughs of these various Europeans could not have been made without the assistance of Indian traditional scholars,’’ writes Singh in her book. “All the same, the Orientalist enterprise appears to a large extent as the discovery of India’s past by European scholars, using the intellectual and interpretive apparatus of the West.” The ‘native’ informants, Singh writes remained anonymous. The names, however, that do survive are Pandit Ramlochan, Rajendralal Mitra, Ishwarchandra Vidyasagar and Ramamaya Tarkaratna.

Towering above a white building with fluted columns with their gold edging—Princep Ghat—is the gleaming silver Vidyasagar Setu. The longest-stayed cable bridge, it changed Kolkata's skyline forever in the 1990s, offering a glimpse of modernity in a happily stuck-in-the-past city. But it also linked—visually, even if the connection is only for the history obsessed—two men polymaths, both integral to piecing together who did what in India’s past.

In a way it is befitting, that the bridge dwarfs the monument of Prinsep. The firm establishment of Buddhism, and its origins in India—has been credited to the Orientalists, a word that is both loaded and now shorthand for the narrow prism of the ‘exotic’. But it couldn’t have been done without the assistance of Indians who helped. In a country, obsessed with the past—and a glorious past—it is time that those who helped write history find their names in it too.