Is anti-sedition law killing journalism in the northeast? 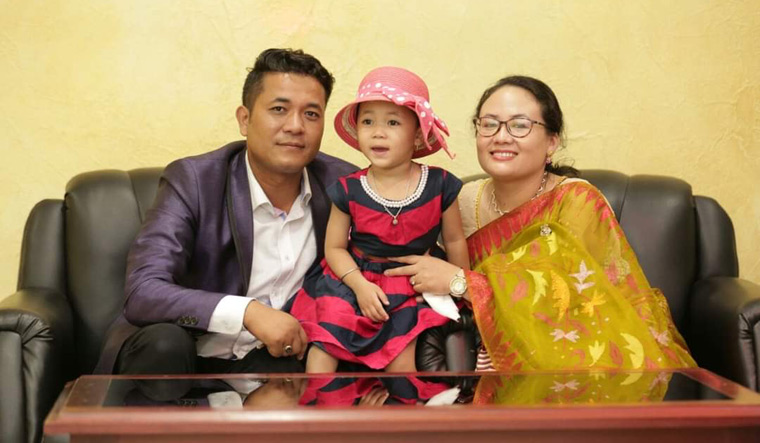 In happier times: Kishorechandra Wangkhem with his family

Kishorechandra Wangkhem, 41, is one of the petitioners who have challenged the controversial sedition law in the Supreme Court. This outspoken Manipur-based journalist has been booked twice for sedition, twice under the National Security Act (NSA) and once for defamation. As he walked out of jail on July 23—after spending more than two months in Manipur Central Jail in Imphal on an NSA case—he said he has become more confident and fearless to speak the truth.

In recent months, sedition charges have been slapped against several journalists in separate cases in Manipur, including Wangkhem’s colleagues Dhiren Sadokpam and Paojel Chaoba—editors of The Frontier Manipur.

Wangkhem is not much upset about the fact that he got jailed. He used his jail time to read books and hear the stories of other inmates. But he is upset about the misapprehensions about the people of the northeast, especially Manipur.

“Manipur is a region where several ethnic groups live in the hills and the valley. Each group is distinct. But the people end up suffering because of lack of understanding [of the law enforcement system about these different identities],” Wangkhem told THE WEEK. “In 2018, I was booked for sedition when I tried to explain that the patriotism of Rani of Jhansi is not historically linked to Manipur. I was emphasising that the younger generation should learn about the struggles of our leaders from Manipur, but it was misunderstood.”

The journalist was arrested but later granted bail in this case. In 2020, another sedition case was slapped against him. He said this time it was for trying to raise his voice against a racial slur. The trial is going on in this case.

Wangkhem points out that the problem will not be solved merely with his release but only by the government fulfilling political commitments, allowing people to speak their mind and showing political will to bring an end to the decades-long insurgency in the northeast.

He uses Wangkhemcha Wangthoi as his Facebook name. In May, he was booked under NSA for an “offensive” Facebook post on the demise of a BJP leader because of Covid-19. Wangkhem's wife Elangbam Ranjeeta says her husband has a sharp mind, and he does not mince words. The couple has three children. “I am thankful to the judiciary for releasing my husband,” she said. “We are simple people, and it unsettles my life each time he gets arrested.” Wangkhem’s lawyer Chongtham Victor said his client is planning to seek compensation for the time spent in jail.

The journalist affirms that he has no connection to any political outfit and is totally against violence. Officials in the Manipur Police, however, said “repeat offenders”—who are booked under laws like sedition and NSA—are a problem as they do not abstain from the acts that can fuel unrest in the state. A senior state government official said, “Sometimes the revolutionary ideas are used by certain forces to keep the pot boiling. It is not the decision of the [higher officials of the] government to invoke sedition or not, it is a decision taken by the [local] police.”

But Lt General Rameshwar Roy, former director general of Assam Rifles, disagrees. Roy, who has led counter-insurgency operations in Kashmir and the northeast, said a fair assessment needs to be made about the capability of the offender before booking them under such laws.

“It is painful to see students and journalists being booked for sedition for certain social media posts and writings without examining whether they even can use it as an instrument against the state,” he said. He added that the Armed Forces Special Powers Act, that is in force in insurgency-affected areas of the northeast, already covers a number of offences.

The northeast accounts for a huge share of sedition cases. Sadokpam, editor-in-chief of The Frontier Manipur and his colleague Chaoba were arrested on January 17 for an article published on their news portal. They were slapped with charges under the sedition law and the Unlawful Activities (Prevention) Act. The article was written by another author but was published after being approved by Sadokpam and Chaoba.

“As far as I remember, the article took a dig at the way insurgent groups were operating in Manipur,” said Sadokpam. “In the northeast, just like some other parts of the country, many writers operate under a pseudonym. The same article was published by other news websites, too, but only we were booked for sedition.” Both Sadokpam and Chaoba were released a day after their arrest. “However, it was a traumatic experience for us and our families,” said Chaoba.

Sadokpam said they were asked to give a written statement which they submitted on March 16 explaining how the editorial clearance was given for the controversial article. “We are not sure if the charges have been dropped or changed to other sections,” he said.