Congress is facing the assembly polls with confidence 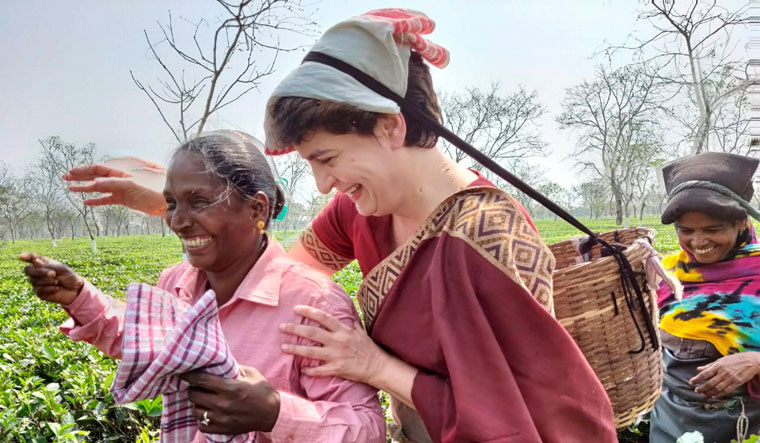 The Congress, after allying with perfume baron Badruddin Ajmal’s All India United Democratic Front and Bodoland People’s Front, looks confident about the electoral arithmetic. Considering Assam’s complex ethnic equation, the party is having a no-frills campaign, as opposed to the BJP’s strategy of carpet-bombing the state with a stellar cast of leaders. Both alliances are on the opposite ends of the cultural debate over the Citizenship (Amendment) Act, and are trying to get their chemistry right with the electorate.

For getting its Assam strategy right, the Congress is relying on success lessons from the last Chhattisgarh and Rajasthan assembly elections. This has resulted in five guarantees in the manifesto: New law to counter the CAA, 02,000 per month to homemakers, daily wage of 0365 for tea workers, five lakh new jobs, and 200 units of free electricity to every household. “These are guarantees, and not poll promises,” said Bobbeeta Sharma, general secretary, Assam Pradesh Congress Committee. “They will be fulfilled when the Congress comes to power.” If the CAA guarantee is aimed at addressing the culturally emotive issue, the other promises are inspired by welfare schemes the Congress implemented in states like Chhattisgarh.

Chhattisgarh Chief Minister Bhupesh Baghel is one of the Congress high command-appointed observers for the state. He has been touring the length and breadth of Assam and is accompanied by a team to help him implement the same strategies that had worked in Chhattisgarh. A group of Congress leaders from Chhattisgarh has gone to all constituencies in the state to firm up the booth management system for the party. The group’s aim is to galvanise the cadres at the grassroots level.

The party has deputed Gogoi, Bordoloi and All India Mahila Congress president Sushmita Dev in different parts of the state, with different assignments. “We are holding small sabhas, corner meetings, and reaching out to households with our message,” said Bordoloi. “We are telling them about our five promises.”

The All-India Congress Committee in-charge of the state, Jitender Singh, is spearheading the party’s campaign strategy. The party has installed a countdown clock based on the day it is planning to fulfil its five election promises for Assam. A similar exercise was carried out by former Rajasthan Congress chief Sachin Pilot before the assembly elections in the desert state. The experiment caught people’s attention and resulted in a positive result.

A crucial factor that may decide the winner in the upcoming elections will be the 45 seats in the upper and central Assam region. The BJP had won 35 seats from this region in the last assembly elections. As the saffron party is expecting a backlash in lower Assam because of the Congress-AIUDF alliance, it is invoking fear of illegal Muslim migrants in the upper and central regions. The Congress, too, is trying hard to win back this erstwhile stronghold of the party. The party is giving a special focus to winning the support of tea workers, many of whose ancestors were brought to this region from Chhattisgarh by the British. Baghel has deputed several leaders in this region to engage with the tribes who have their roots in his state. AICC general secretary Priyanka Gandhi Vadra started her campaign in Assam from the tea country.

Drawing on the anti-CAA sentiments in the state, the Congress has made Assam’s syncretic culture the main theme in its campaign. The party’s multimedia ads are based on Bhaona, a traditional form of entertainment created by a 15th-century Vaishnavite religious reformer, Mahapurusha Srimanta Sankardev. “Sankardev’s message for Assam was [religious] harmony, and that is why Muslims stayed here intermingling [with the Hindus], unlike ghettos in other parts of the country,” said Sharma.

Another reason for the Congress invoking the theme of syncretic culture is its alliance with Ajmal’s party. He set up his party in 2005 after the Illegal Migrants (Determination by Tribunal) Act was struck down by the Supreme Court. The party has provided a political forum for Muslims, ethnic minorities and migrants. The AIUDF garnered a 13 per cent vote share in the last assembly elections, while the Congress bagged 31 per cent, the BJP 29.5 per cent and the Asom Gana Parishad 8 per cent. Add the BPF’s vote share from the 2016 elections to the Congress-AIUDF alliance, and it would reach 48 per cent.

Ajmal is expected to become the kingmaker in the current elections. He has positioned himself as the sole leader of the Muslims in the state. The Congress made a nuanced switch to ally with him as it found that its soft hindutva game plan is finding only limited traction among a major chunk of its electorate.

On the opposite side, aligning with Ajmal, who is often derided as the saviour of illegal migrants, is riddled with the risk of the grand old party losing some of its traditional voters who are not comfortable with the AIUDF.

Assam’s Muslim population is over 35 per cent, and is often used as a statistic to highlight the changing demographic profile of the state. Many people in the state see the influx of Bengali-speaking migrants as a threat to their culture, and the BJP campaign is centred on polarising the 61 per cent of Hindu votes in the state. The party is trying to paint Ajmal as a mascot of illegal Muslim migrants to attack the Congress. “The Congress-AIUDF alliance is like Mughals, as they are trying to harm the sons of the soil,” said Chief Minister Sarbananda Sonowal. “The BJP is trying to save the people. The AIUDF was formed with the sole purpose to save the illegal migrants. We will oppose it, and the Congress will pay for it.”

For Ajmal, this is the chance to be part of the government, if the alliance does well. His party solely runs on his name and is funded by his family businesses. “We will try to oust the BJP from the state, that is our motive,” he said. “They are using my face and Muslims to polarise Hindus. I have said no Bangladeshi should be allowed to stay here. All Bangladeshis should be deported.” Ajmal dismissed the speculation that he wants to be the chief minister, but added that his party would like to join the alliance government.

If the Congress forms its government with the AIUDF, it will have to do a tightrope walk—especially in issues related to the CAA and the National Register of Citizens—as any controversy is likely to be used against it in other parts of India. “The AIUDF has not talked about destroying temples or establishing Islamic rule,” said Bordoloi. “We have told them that if they ever utter any communal statement, we would part company.”