Return of the native 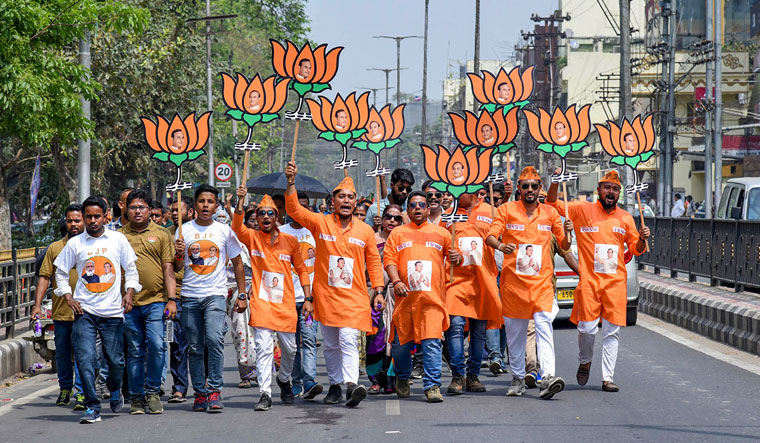 Saffron wave: BJP workers take out a rally at Jalukbari in Guwahati | PTI

Aserpentine road in Kharghuli Hills leads to a coveted address in Guwahati, one that gives a panoramic view of the city and the Brahmaputra. It is a state guest house named after the mighty river, and it has been the official residence of Sarbananda Sonowal since 2016, when he took over as Assam chief minister. The state has no designated residence for the chief minister, but Sonowal is not complaining. He has always stayed close to the rivers. He is, after all, a Sonowal; the eponymous tribe known for extracting son, or gold, from the riverbed.

The Brahmaputra, notoriously ferocious during the monsoon, is serene now—unmindful of the intense political battle unfolding along its banks. And so seems Sonowal, the state’s second tribal chief minister but the first to complete a full term. Soft-spoken and amiable, he had led the BJP to its first assembly polls victory in the northeast five years ago. This time, he faces a twin challenge: return to power and hold on to the chief minister’s chair.

The guest house, much like its occupant, is spartan and well-maintained. An elevator marked “CM’s Lift” signals that Sonowal is on his way from the third-floor suite to the second-floor dining room. He emerges from the elevator beaming, wearing an Assamese gamcha around his neck and a freshly-applied tilak on his forehead.

After exchanging greetings, he heads straight to the dining table. On it are shiny yellow bell-metal plates and utensils, distinctly Assamese. Breakfast is boiled vegetables—broccoli, beans and carrot—and moong dal and rice. And milk tea. It is what he has every single day.

Not one to discriminate between dishes, Sonowal mixes the vegetables with the rice and eats hurriedly with his hands. “I like boiled vegetables, and avoid oily and fried food,” he says. “More so after becoming chief minister. I exercise one hour every day—yoga, pranayam, anulom vilom. Physical health is key, so there is no escaping the workout. If the body is tired, our gaadi will stop.”

Sonowal gives no signs of stopping. At 59, his physique belies his age.

Breakfasts, too, have become part of the busy poll schedule. A senior BJP leader walks in, the stubble on his face accentuating his dejected look. The man has been denied a party ticket. Sonowal asks him to sit down and have breakfast, but he declines. The chief minister then gives him a pep talk in Assamese. “Don’t lose hope,” he says. “When we form government, there will be options.”

Sonowal plays the part of the pacifier well. As he leaves the house and boards an AgustaWestland helicopter at Guwahati airport, an assistant puts him on another call. Sonowal again delivers a pep talk. “Leaders who have not got tickets need to be encouraged, and told that the party is bigger, that they should be patient,” Sonowal tells me. “Not all can become MLAs.”

We are airborne. The chopper leaves the Brahmaputra behind and heads for Pathshala—a neighbouring, nondescript town known for the travelling theatre movement. It is where state BJP president Ranjit Das is a candidate. We land 35 minutes later. Das and Baijayant Panda, the BJP vice president in charge of Assam, welcome Sonowal, who then leads a padyatra to the venue of the public meeting. He also holds a roadshow for Das and addresses a rally seeking votes for him.

The legislator representing Pathshala, which lies in the Patacharkuchi constituency, was Pabindra Deka of the Asom Gana Parishad. Last December, Deka quit the AGP and joined the Assam Jatiya Parishad, a party formed by members of the apolitical All Assam Students’ Union (AASU) after widespread protests against the 2019 Citizenship (Amendment) Act.

In Pathshala, the BJP faces the same challenge as it faces everywhere else—anger against the new law. But the party believes that it is better placed than rivals to win the polls. “Deka is cashing in on anti-CAA protests,” says Kamal Jain, treasurer of the BJP’s state unit. “The voters are also miffed that the BJP has brought in Das, who stays some 70 kilometres away. But the BJP has an advantage—a new district was formed recently.”

Ironically, Sonowal’s challenge is to tackle the same issue that enabled his political rise: the question of Assamese identity. In 2000, he had moved the Supreme Court against a controversial law—the 1983 Illegal Migrants (Determination by Tribunals) Act, which had put the burden of proof on complainants rather than suspected illegal immigrants. The law was perceived to be in favour of Bangladeshi immigrants, whose influx into Assam was changing the state’s electoral profile.

Sonowal’s petition led to five years of hearings, after which the Supreme Court struck down the law as unconstitutional. He was hailed as jatiya nayak (community hero) after the landmark judgment, and his image played a crucial role in helping the BJP come to power in 2016.

Five years later, with the CAA having redrawn the contours of the citizenship issue, the fight for Assamese identity has once again become the leitmotif of the polls. The BJP is now accused of plotting to grant citizenship to lakhs of Bengali Hindus, who are linguistically and culturally different from the ethnic Assamese. Though the pandemic helped the BJP contain the protests, the issue is far from resolved.

The BJP, which leads a coalition that includes the AGP and the United People’s Party Liberal, is trying to shift the focus to illegal Muslim migrants who “threaten” Assamese society. “The alliance of the Congress and Badruddin Ajmal’s All India United Democratic Front is like Mughal invasion,” Sonowal tells me. “They want to capture Assam.”

The Congress-AIUDF alliance has given the BJP much ammunition. The AIUDF, which was formed the year the IMDT Act was struck down, has been championing the cause of Muslims. Although the alliance makes arithmetical sense—more than 30 per cent of the state’s population is Muslim—it has helped the BJP set the narrative for its high-octane campaign led by Prime Minister Narendra Modi, Union Home Minister Amit Shah and party president J.P. Nadda.

The Congress has responded with a campaign of cultural symbolism. “Our Axomiyatva (Assamese identity) is different from the BJP’s hindutva,” says Pradyut Bordoloi, MP and chief of the Congress’s campaign committee. “Axomiyatva is very inclusive, very liberal. It provides space to every community, caste and religion.”

Regional-minded parties like the Asom Jatiya Parishad and the Raijor Dol have formed a third front. The AJP’s president is Lurinjyoti Gogoi, who was AASU’s general secretary. Sonowal, who was AASU president for seven years before he entered politics, has lost the student body’s favour.

“We turned political because political action has to be taken,” said Sankar Jyoti Baruah, AASU’s general secretary. “Earlier, we indirectly supported the AGP. But it lost its regionalism, so we needed a new party to support our interests—be it in the oil fields or in the tea industry. The Congress is supporting illegal Muslims; the BJP is supporting illegal Bengali Hindus. We oppose both.”

The ethnic Assamese fear that they would lose political control over the state. Of 126 assembly seats, Muslims hold sway in 30. The ‘tea tribes’ —indigenous people from other parts of the country, brought by the British to work in tea gardens—make up 17 per cent of the population. They hold sway in 35 constituencies.

The polls will be held in three phases. In most seats, it is a direct contest between the Congress-led and BJP-led alliances. In around three dozen seats dominated by Assamese speakers, the AJP-Raijor Dal will make it a triangular contest. Predictably, all parties are feeding the fear of the other. The state government recently ordered the shutdown of all government madrassas in the state, sending a signal to the majority community.

The BJP is also banking on the goodwill generated by welfare schemes. It hopes that a section of Muslim voters, too, will support it. Eight of the BJP’s 92 candidates are Muslims. “The number of beneficiaries [of welfare schemes] has crossed one crore,” says Sonowal as we board the helicopter again.

A suitable place to gauge the public sentiment would be Mangaldai, a small town around 70 kilometres from Guwahati. Mangaldai was the epicentre of an anti-migrant movement in 1979. 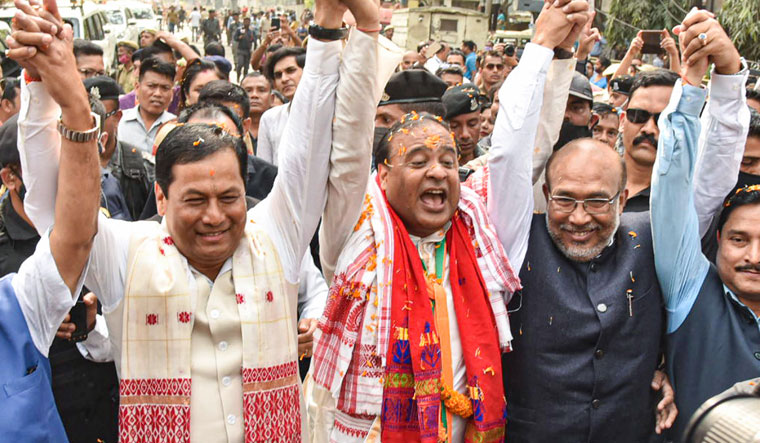 Bichitra Medhi, 72, has vivid memories of that movement. A former professor of geography, whose ancestors moved to Assam several centuries ago, Medhi draws a parallel between 1979 and now. “The agitation started when there was a spurt in the registration of Muslim voters here before a byelection,” he says. “My student was killed in the agitation. Then there was a retaliation, in which thousands of houses were burnt. [The violence] continued for six years, till the Assam Accord was signed.”

According to Medhi, the Assamese identity has always been based on language, and not on religion. “Even when Aurangzeb wanted to capture Assam, he sent forces under Hindu Rajput general Ram Singh,” says Medhi. “Lachit Borphukan, the Assamese general who defeated the Mughals, was assisted by a Muslim, Ismail Siddique. The Mughals attacked Assam 17 times. Every time, prisoners of war—mostly Muslims—were settled here, and they adopted the local culture. The problem started with the advent of Bengali-speaking Muslims, who pose an economic and political threat. Bengali-speaking Hindus, too, are seen as a threat—to our language. We fear both.”

Medhi says political parties have not been able to fulfil people’s aspirations. Voters seem to be silently assessing their options. In an effort to cast the widest net, the BJP has promised to publish a corrected National Register of Citizens, hold a delimitation exercise to protect the political rights of local people, and preserve namghars, the religious places of tribals.

Medhi says many supporters are miffed at the Congress’s decision to join hands with Ajmal. Still, the arithmetic favours the alliance. In the previous polls, the BJP had bagged more than 72,000 votes in Mangaldai. The Congress and the AIUDF got 51,000 and 48,000 votes, respectively. Having read the tea leaves, the BJP has fielded Paramananda Rajbongshi, former president of the Assam Sahitya Sabha, in the neighbouring Sipajhar constituency.

Abdul Qadeer, a lawyer in Sipajhar, says the Muslim fear of the BJP is leading to a consolidation of votes in favour of the Congress alliance. “But [the trend] is silent,” he says.

For Sonowal, there are challenges within the party as well. The BJP has not declared a chief minister candidate this time, leading to speculation that his cabinet colleague Himanta Biswa Sarma would be picked for the top post. Sarma is seen as a hard taskmaster who can make quick decisions and deliver on promises. He has been leading a spirited campaign and drawing huge crowds.

Still, the top post has always gone to leaders from upper Assam, like Sonowal and the late Tarun Gogoi of the Congress. Sarma belongs to lower Assam. According to a veteran Guwahati-based editor, the BJP would be hard-pressed to explain its decision if it picks Sarma, a Brahmin, over Sonowal. “Sonowal is seen as sober and religious,” says the editor. “The Assamese middle class prefer him.”

Both Sarma and Sonowal were first elected to the assembly in 2001, when they were members of the Congress and the AGP, respectively. Sarma was finance minister in the Gogoi government before he quit the Congress and joined the BJP in 2016. Sonowal joined the BJP in 2011, and was Union minister from 2014 to 2016, when he was tasked with leading the party in the assembly polls. “The BJP has given me a lot,” says Sonowal. “It twice made me state president. I was made Union sports minister and then chief minister. What more can I ask for?”

The helicopter lands at Guwahati airport. Sonowal is ready to board another flight—this time to Dibrugarh, where the BJP is engaged in a pitched battle with the Congress. Before he takes leave, he tells me his guiding principle. “Bhakti gives us shakti,” he says. “No power will sustain you if you don’t have bhakti, or trust in society. Without it, no power will give you peace.”