Superhumans in the streets 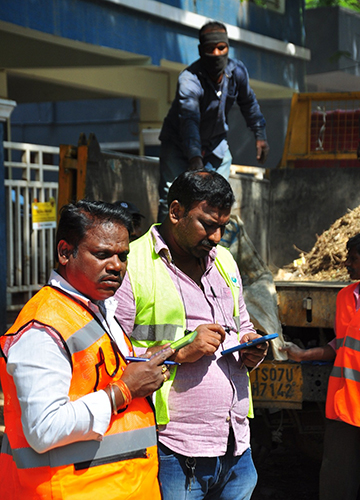 Sarojanamma, 50, had been hit multiple times by speeding bikers in the past. “Those riders escaped. What can I do?” she asks. “If the injury is minor, I just continue my work.” One such accident left her with a serious and permanent injury to her back. Still, she ensures that her duties are discharged. For more than two decades, Sarojanamma has been a sanitation worker of Greater Hyderabad Municipal Corporation. She sweeps the road and clears trash in the Erragadda area in western Hyderabad.

The pandemic made her work tougher. Sometime in late 2020, she tested positive for Covid-19. After spending almost a week in a government-run Covid-19 hospital in Hyderabad, she was back on her feet. “When I got discharged, I told my supervisor I can start work immediately, but he insisted that I should take rest,” she says. “I was weak, but I felt the need to work during this period.”

Sarojanamma, in a way, epitomises the spirit of the sanitation workers of the city. The city employs around 25,000 sanitation workers—a mix of permanent and contract workers. When Covid-19 cases spiked in Hyderabad city, the workers rose to the occasion.

A chat with P. Kanakaraju gives a glimpse into the pressures of working in the sanitation department during a pandemic. Kanakaraju is a sanitary field assistant who supervises the work of around 120 sweepers and garbage collectors in the Kukatpally area, which is close to the city's IT zone. The initial days of lockdown were stressful and challenging for him. “In the first week of lockdown, 20 per cent of my staff did not turn up,” he says. “I learnt that many of them feared contracting the virus. I had to talk to them and motivate them to come to work. Some of them could not travel because of restrictions. We had to arrange transportation for them.”

Kanakaraju's usual eight-hour shift often stretched to 15 hours. “On some days, I had to personally collect garbage from containment zones because of lack of manpower,” he says. “My family became anxious as I was constantly taking up different outdoor tasks. So, I sent them away to my relative's house to protect them.” Ask Kanakaraju what kept him going during the tough time, he is quick to answer that it was his “service [mentality] to the society”. 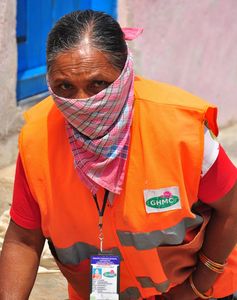 Many sanitation workers had to perform multiple roles during the pandemic, from identifying the Covid-19 suspects to conducting health surveys. They also ensured that patients with mild symptoms obeyed home-quarantine norms.

For A. Dhanalakshmi, 35, a sanitation worker from central Hyderabad, wearing gloves and a mask was tough as it made her breathless and uncomfortable. But she continued in her duties on the front lines.

“On usual days, my job is to sweep an assigned part of the road and clear the garbage,” she says. “During the lockdown, I was sent to containment zones. The patients and their family members would ask me to get fruits or vegetables for them and I would do it. On many occasions, I went hungry for the most part of the day as I would have left home early without eating. I have three kids, and I was scared for my family. But looking at senior officers on the field I asked myself, ‘If we do not come out on the streets and work then who will?’”

Not to forget, working quietly to keep the indoors of hospitals and offices clean were thousands of sanitation workers employed in the government and private sector. In hospitals, the workers had to overcome their own set of problems.

For the first few months after the pandemic broke out in Telangana, Gandhi Hospital in Hyderabad was the only designated Covid-19 hospital in the state. What followed was an unexpected level of stigma against the staff of the hospital. “I live in a village on the outskirts of Hyderabad and travel 60km every day,” said S. Suguna, an attender at Gandhi Hospital. “The villagers barred me from entering the village. I had no option but to return and live in a corner of the hospital campus. I did not even see my husband and three daughters for more than two months. Even the patients' relatives were scared to go near the patients, but we did. I went through a lot of hardships then.”

A sanitation staff in the hospital, who did not wish to be named, said that some of her colleagues were drinking too much alcohol as they felt ostracised and were separated from their family for weeks together. “Majority of the sanitation workers were ready to go and clean the Covid-19 wards, where even some of the doctors were hesitant to go,” she says.