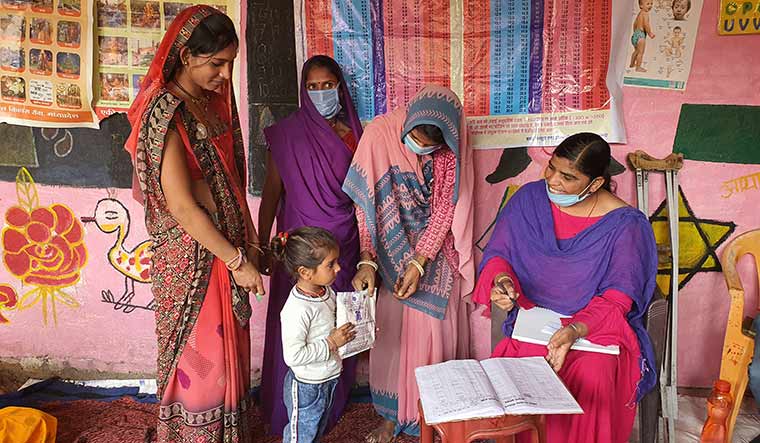 Checking in: Ramkalan (sitting) during her routine rounds amid the pandemic | Rakesh Malaviya

Rachna Mewada's house is but a few steps from the bylane running through Hirapur village in Sehore district of Madhya Pradesh. The 24-year-old, however, is aware that even a few steps can tire out anganwadi worker Ramkalan Mewada, who is on her daily rounds of the village. By the time Ramkalan, 36, arrives at her doorstep, beads of sweat dot her face despite the pleasant February weather. Rachna, who is four months pregnant, greets her with a glass of water, and puts out a charpai for her to sit on.

Ramkalan sits down, resting her pair of crutches on the wooden cot, and takes a few sips of water. Then begin her inquiries: Was Rachna having enough greens in her diet? Was she taking the iron tablets on time? Was she taking enough rest? Does she remember that her next vaccination is due on Tuesday? Was she giving the supplementary food—supplied as take-home ration by the anganwadi—to her son Hardik, who will soon be three years old?

To each of these queries, Rachna nods in the affirmative. But her eyes remain on Ramkalan, observing the steadying of her breath. She takes the empty tumbler from Ramkalan, and then asks the anganwadi worker a few questions of her own.

Caring is a collective affair in Hirapur—home to 1,670 villagers including 140 children and 130 adolescents. And that is what got this village, located 90km from Bhopal, safely through the pandemic. Despite 80 migrant workers returning to the village at the height of Covid-19 in May-June 2020, no positive case was reported. Neighbouring Kajikhedi, however, reported at least a dozen cases.

The admiration is mutual, too. Villagers are highly appreciative of Ramkalan's dedication and diligence despite being physically challenged. Struck by polio at six, she relies on crutches to walk. But she refused to let her disability deter her; she continued making her rounds amid the pandemic, come rain or shine.

“ Apart from ensuring that we got the supplementary nutritious food for my two children at home, Ramkalan didi constantly counselled us about the precautions to be taken for Covid-19,” says Lalita Malwi. “Also, she ensured that the migrant workers who returned followed the quarantine norms.”

Sitabai Malwi initially found it difficult to follow the safety norms. “But constant reminders by Ramkalan made us take her advice very seriously,” she says. Vinita Mewada, 17, says that Ramkalan also showed them how to make cotton cloth pads, as sanitary pads became unavailable during lockdown.

Ramkalan, however, credits the villagers for strictly following the Covid-19 guidelines. Keeping the village safe, she adds, would have been an uphill task if not for the help provided by her associate frontline workers like anganwadi helper Reena Chouria, accredited social health activist Mamta Perwal and auxiliary nurse midwife Rajkumar Sunhere.

“My seniors like Anita Chouhan madam, superviser of the Department of Women and Child Development (DWCD), child development project officer Sandeep Ruhal sir and even higher officials have always been very supportive,” says Ramkalan. “They do not expect me to attend all the meetings or engage in work that involves too much movement. But during this difficult time, their support was even more intense.”

Chouhan says that Ramkalan is so devoted to her work that it hardly matters whether she can always be present at meetings or not. “We know that she will fulfill her duties and do more,” she says.

Ramkalan's biggest support comes from her family. Her two brothers and teenaged nephew ensure that she walks as little as possible during her rounds; they ferry her around on a motorbike. Every time she returns home from her rounds, her 70-year-old father Bakhshilal keeps a bucket of water ready for her and helps her wash her hands and feet.

“As I was regularly in the field, I was very worried, particularly about my parents (her father has a lung ailment and mother suffers from Parkinson’s disease) and my nine-year-old nephew,” says Ramkalan. “But my family boosted my confidence to go on.”

Her own worries though did not stop Ramkalan from allaying fears of others. Manju Mewada, 29, caught a cold during the pandemic. She had cough, too, and that got her worried. “But didi not only boosted my morale, but also helped me get medicines,” says the mother of three. “She suggested home remedies for my symptoms. Constant counselling put my fears to rest.”

Similar stories of dedication abound in Madhya Pradesh, which has 97,315 anganwadi centres. Workers and helpers went out of their way during the pandemic to ensure that the nutrition and health needs of children and pregnant women and lactating mothers were being met. To laud them, the DWCD recently documented efforts of about 20 anganwadi workers through a series of experience-sharing webinars.

DWCD commissioner Swati Meena Naik says that like Ramkalan, all workers showed courage to rise up to the occasion and don the role of Covid-19 heroes. “Their efforts also reflect the indomitable spirit of womanhood to never back out and work incessantly to ensure security of the family and the community,” she tells THE WEEK.