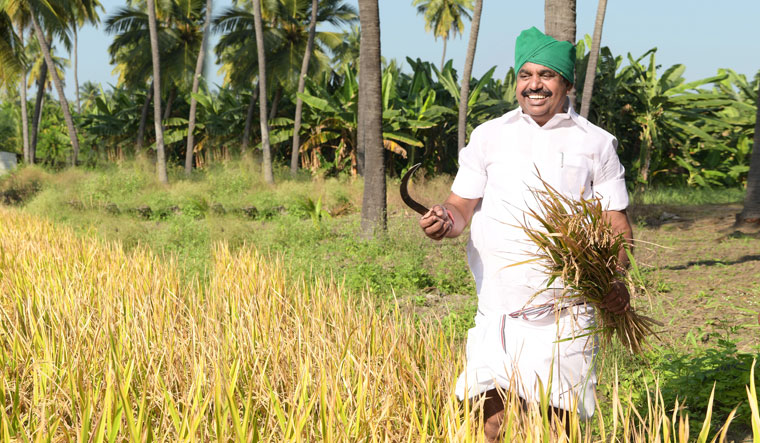 Son of the soil: palaniswami is betting on his humble, down-to-earth image to help him win the upcoming elections

On January 14, Pongal eve, Tamil Nadu was gearing up to celebrate the harvest festival after a year marred by the Covid-19 pandemic. But, Chief Minister Edappadi K. Palaniswami was busy at work, reviewing whether every household had benefited from the government’s festival largesse of Rs2,500. He was also seeking an appointment with Prime Minister Narendra Modi to get him to inaugurate a grand beach memorial for former chief minister J. Jayalalithaa.

Clad in his trademark white dhoti and shirt with sleeves rolled up, the 66-year-old Palaniswami appeared affable and down to earth as he sat down with THE WEEK for an exclusive interview. But, he was strict about following Covid protocols. A glass barrier on his desk separated him from visitors. And he declined requests, by Deputy Photo Editor Bhanu Prakash Chandra, to remove his two-ply face mask. “I advocate that people should wear masks. I am particular that I practise what I preach,” he said. “But you may ask me any number of questions—about me, my governance. I am ready to answer.”

Palaniswami opened up about a number of issues such as the corruption charges levelled against him by the opposition, his tenuous ties with Deputy Chief Minister O. Panneerselvam and the All India Anna Dravida Munnetra Kazhagam’s delicate balancing act with the BJP. He may not be articulate or charismatic like his predecessors M.G. Ramachandran or Jayalalithaa, but hidden behind his unassuming personality are unmatched survival skills, incredible resilience and a sharp political mind, which have given him control over the party and the government.

Hardly anyone outside Tamil Nadu had heard about Palaniswami until the AIADMK made him chief minister after Jayalalithaa’s death in 2016. He belongs to the powerful Gounder community which is dominant in western Tamil Nadu. His elevation to the top post ended the decades-long dominance of the Thevar community in the AIADMK. (Panneerselvam and Jayalalithaa’s confidante V.K. Sasikala are Thevars.)

Palaniswami has come a long way from his humble beginnings. He was born in 1954 to Thavusayammal and Karuppa Gounder in a picturesque farming village called Siluvampalayam in Salem district. The quaint village on the banks of the Cauvery did not even have a primary school back then. He did his schooling in the neighbouring Koneripatti village; though he later joined Sri Vasavi College in Erode for a bachelor’s degree in zoology, he could not complete the course.

Palaniswami then started selling jaggery at the popular Chithode market in Erode. He bought jaggery from sugarcane farmers in Siluvampalayam, and took it to the market on a bicycle. “He never failed to make his payments. He would take the load on Friday, sell it on Saturday and pay us on Sunday morning,” recalled Sundaramurthy Krishnamurthy, one of his relatives.

It was during this time that he entered politics. He joined the AIADMK in 1974 and was elected to the assembly from Edappadi in 1989. Palaniswami won again in 1991, 2011 and 2016. He won the Lok Sabha election from Tiruchengode in 1998. “He is a humble person. He will never get angry, not even with his detractors,” said A. Krishnamurthy Gounder, one of his uncles from Siluvampalayam. “He has his own style of working. He always believes in hard work.”

Siluvampalayam is no longer a nondescript village. It has become a model village with well-laid roads, street lights and other basic amenities. A village of around 200 families, it is dominated by the Gounders; most of them are related to the chief minister and all of them are into agriculture. “I am a member of the AIADMK. But the chief minister’s work is different and I don’t get involved in that,” said K. Govindaraj, Palaniswami’s elder brother. Clad in a lungi and a shirt covered in dirt, he was busy supervising the construction of a temple in Koneripatti. “I am a farmer. I am happy with what I am and it is very peaceful in my village,” said Govindaraj, who shuttles around on an old moped.

Palaniswami has been very close to his village and his family, especially his mother. Till her death in October, he used to visit her every fortnight. Palaniswami owns a betelnut farm and a plantain farm in Siluvampalayam. People THE WEEK spoke to highlighted his affection for the village and his fondness for farming. “He is quite down to earth. And he knows all about farming,” said K. Gnanasundaram, one of Palaniswami’s relatives.

In February 2017, when Palaniswami was sworn in as chief minister after a bitter faction feud between Sasikala and Panneerselvam, political observers felt that the new chief minister, who was Sasikala’s nominee, was unlikely to last. But he thrived and has taken complete control of the government and the party, outwitting both Sasikala and Panneerselvam. He first joined hands with Panneerselvam to expel Sasikala from the party. He then made peace with Panneerselvam, but ensured that he remained his deputy in the cabinet. In the party, although Panneerselvam has the position of coordinator, workers and leaders are largely with Palaniswami. “There are many traitors who want to pull me down. Even 15 days ago, they tried hard to break the party. But I sensed it and thwarted their attempts,” said Palaniswami.

On January 9, when the party’s general council met in Chennai, he made Panneerselvam reiterate that he would be the face of the party in the upcoming polls. For ordinary party workers, he is always accessible and he listens to their complaints and suggestions. Palaniswami no longer accepts that he was chosen as chief minister by Sasikala, who recently walked out of a Bengaluru jail after serving a four-year sentence on corruption charges. He told THE WEEK that he rose through the ranks because of sheer hard work and he refused to answer even a single question about Sasikala. With the party under his total control, he is unlikely to let Sasikala back in.

Although he is a first-term chief minister, Palaniswami has proved to be a seasoned administrator. His decision to reserve 7.5 per cent of medical seats for government school students has been hugely popular. Another popular initiative is the Kudimaramathu scheme for desilting rivers and canals. He was the first chief minister from the state to travel abroad to solicit investments. “He is accessible, decisive and is genuinely interested in getting new investments into Tamil Nadu and ensuring ease of doing business,” said a senior IAS officer in the industries department. And, he has a more collegial style of functioning, preferring to keep his team of ministers and bureaucrats largely undisturbed, unlike Jayalalithaa, who went for regular reshuffles. His detractors, however, argue that he lacks the stature to rein in erring and inefficient colleagues.

But Palaniswami has never hesitated to act tough when the situation warranted it. He moved swiftly and ruthlessly against the BJP when the party started playing hindutva politics and threatened to eat into the AIADMK vote bank, although the two parties have been allies since the 2019 Lok Sabha elections and will be fighting the upcoming assembly elections together. The BJP launched the Vel Yatra as an attempt to gain a foothold in Tamil Nadu by invoking religious symbols associated with Lord Muruga. Palaniswami checkmated it with a firm hand, citing Covid-19 restrictions and an order from the Madras High Court. The BJP launched the yatra, alleging that the Dravidian movement was not respectful towards Lord Muruga. But the chief minister turned the tables on the BJP by declaring Thaipusam, the biggest festival celebrated by Tamils in the name of Lord Muruga, a public holiday.

The Pattali Makkal Katchi (PMK), another prominent ally of the AIADMK, too, has realised that it is not easy to outmanoeuvre Palaniswami. PMK supremo S. Ramadoss has been demanding 20 per cent reservation in government jobs and higher education for his Vanniyar community, which is one of the dominant caste groups in northern Tamil Nadu. A day after the PMK launched an indefinite agitation to press for its demand, Palaniswami ordered the setting up of a commission to conduct a caste-based survey. Ramadoss criticised the move and said it was just a delaying tactic.

Palaniswami will, however, go down in history as the first chief minister to concede a prominent space for the BJP in Tamil Nadu politics. Jayalalithaa and DMK supremo M. Karunanidhi, too, had tie-ups with the BJP, but only for Lok Sabha elections, and on their own terms. After her 2004 Lok Sabha election debacle, Jayalalithaa had apologised to AIADMK cadres for aligning with the BJP and had promised that she would never repeat the mistake. She once even made Union Minister Piyush Goyal wait at the gates of her Poes Garden residence for an appointment. But four years after her death, her successor seems to be relying on the BJP to keep his government safe and the party together.