The BJP has no reluctance to accept me as CM candidate 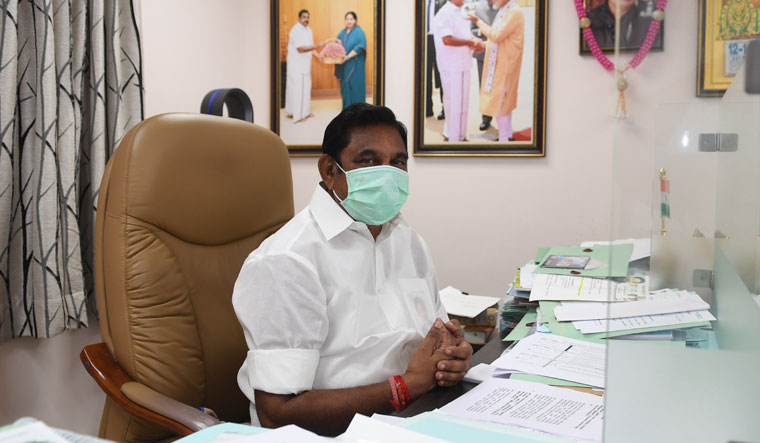 Q/ Were the past four years tough for you? Tell us about the challenges you faced as chief minister.

A/ I took over at a time of great challenges and difficulties. We had lost our Amma (former chief minister J. Jayalalithaa), who had led the cadres and saved the party. I faced many hurdles which no other chief minister in the state would have faced in the past six decades. There were challenges like drought, floods, the Covid-19 pandemic and also conspiracies by opposition parties. But I have overcome all those challenges with the help of the people and with the blessings of God. And now the state is marching forward victoriously.

Q/ You call your government Amma government and your welfare schemes are named after Jayalalithaa. So what is your role as chief minister?

A/ The successful running of the government and the implementation of various welfare schemes have been made possible by the coordinated efforts of everyone and also because of the efficient leadership. I have been working hard with the help of officers in all departments. This has been made possible with their coordinated efforts under my advice about how to implement various welfare schemes for the benefit of the people.

A/ Our Amma was a most efficient and matchless leader. She had a [unique] position in Indian history and she cannot be compared with any other leader. I will say with pride that everyone in the AIADMK (All India Anna Dravida Munnetra Kazhagam) has been influenced by her political prowess. I am very happy that I have been able to continue her welfare government.

Q/ Was Jayalalithaa your mentor?

A/ Amma was a tall personality with great political prowess. I worked under her for several years. As a result, I became chief minister with a mission to serve the people. I am proud to say that Jayalalithaa was my mentor.

Q/ Have you ever thought that you would one day fill the shoes of MGR (former chief minister and AIADMK founder M.G. Ramachandran) and Jayalalithaa?

A/ This is the speciality of the AIADMK. In our party, anyone can become the leader and can head the government. Any cadre from the grassroots can become an MLA, an MP, a minister or even the chief minister. There is no dynastic politics. But I never thought that I would become chief minister.

Q/ Who else has inspired you, apart from MGR and Jayalalithaa?

A/ Thanthai Periyar (E.V. Ramasamy), Anna (C.N. Annadurai) and (K.) Kamaraj. Those leaders remain the inspiration to most people in Tamil Nadu.

Q/ Who are the national leaders you admire the most?

A/ I like the simplicity, humility and the long-term vision of Kamaraj, the man who made Tamil pride known to the world. He introduced all welfare measures out of love for the people. I like the personality, administrative capability, diligence and simplicity of Prime Minister Narendra Modi ji.

Q/ Do you interact with chief ministers of other states?

Q/ From where do you draw the strength to work in these difficult times?

A/ Though I am influenced by the rationalist ideology, I believe in God. I derive my strength from God’s grace, Amma’s soul and peoples’ love.

Q/ Does your family stand by you in difficult times?

A/ I want to maintain privacy when it comes to my personal life. And my family does not like the media limelight. I love the work I do. I don’t look at my job as being stressful. I enjoy my work. And there is no fatigue for those who work for the welfare of the people.

Q/ The 7.5 per cent reservation for government school students in medical colleges is one of your latest initiatives.

A/ Nearly 41 per cent of the students in government schools are poor. They, too, should get access to medical education. It was for this purpose that I thought of internal reservation for government school students. It was my own idea. As I come from a village, I understand the difficulties and challenges faced by villagers and also their needs.

Q/ Unlike your predecessors, you chose to go abroad seeking foreign investments for Tamil Nadu.

A/ I want to ensure that there is no unemployment in the state and that our educated youth get jobs. For this, there should be more industries and investments. It will help raise the per capita income. So I took a major step and travelled to various foreign countries to meet Tamils living there and to bring in investments. We got 41 companies to set up facilities in Tamil Nadu, with investments worth Rs8,835 crore. We have also created more than 35,000 jobs through this. In the second global investors' meet in 2019, we got investments worth Rs3.501 lakh crore and jobs for 10.5 lakh people.

Q/ The DMK has published a long list of corruption charges against you and your cabinet ministers.

A/ Those who are totally corrupt will see others as corrupt, too.

Q/ What is your opinion about M.K. Stalin?

A/ He could act like a more mature leader.

Q/ The BJP has been talking about the dynastic politics in the DMK.

A/ The whole world knows that the DMK is into dynasty politics. 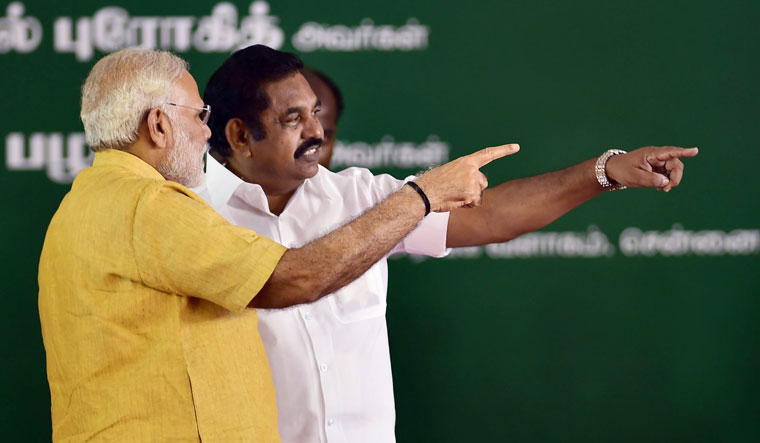 Bridging the gap: Palaniswami says Modi respects the AIADMK and wants the party to grow | PTI

Q/ What is the role of Deputy Chief Minister O. Panneerselvam?

A/ He is helpful in all possible ways for the government’s smooth functioning. He has also helped in ensuring that the AIADMK remains an unbreakable fort.

Q/ You are now the face of the AIADMK. What is Panneerselvam’s role in making you chief minister again?

A/ As the AIADMK coordinator and also as per the consensus arrived at by the party, it was Panneerselvam who named me as the chief minister candidate.

Q/ The Pattali Makkal Katchi (PMK), which is one of your alliance partners, has been demanding 20 per cent job reservation for the Vanniyar community.

A/ The Vanniyars have helped in Tamil Nadu’s development in many ways. But as chief minister, I have to consider the demands of other communities, too. So we have set up a commission for a caste-wise census.

Q/ What is your opinion about the BJP as an alliance partner?

A/ At the Centre, the BJP is running a government which is being hailed by the people. And in the state, it is a part of our alliance.

Q/ Have you ever felt that the BJP has a big brother attitude?

A/ Not at all. They are acting as per the alliance dharma.

Q/ What is the role of Prime Minister Modi in helping the development of Tamil Nadu?

A/ He has given us permission for 11 new medical colleges, the maximum till date. He has helped the state by clearing the setting up of the Cauvery Management Board and by giving Protected Special Agricultural Zone status for the Cauvery delta region. He has given required financial assistance for various projects and has brought about changes in the post-matric scholarship, as per our request.

Q/ What is your opinion about Narendra Modi?

A/ He is a people’s leader. He always thinks about the welfare of the people. He always mentions Tamil language, Tamil culture, the Thirukkural and Bharathiyar poems in his speeches. He has expressed his love for our farmers by sanctioning the protected agricultural zone.

Q/ Don’t you think that you will lose minority votes by aligning with the BJP? Jayalalithaa had once said that she would never go with the BJP.

A/ Unity in diversity is what we follow. We have never deviated from the direction shown by our two leaders, MGR and Amma. We have always protected the minorities and will continue to do so. It was our Amma who introduced for the first time in India a scheme to provide financial assistance to those who want to go on a pilgrimage to Jerusalem. That assistance has now been revised from Rs20,000 to Rs37,000. The subsidy given to Hajj pilgrims was stopped, but our Amma government has revived it.

Q/ Are you a religious person? How do you look at the BJP’s politics?

A/ I always believed in spirituality in the form of God. I will not say anything more about my faith. Every party has its own ideology. And the BJP is acting according to its ideology.

Q/ In the last 50 years, under the Dravidian parties, Tamil Nadu has scaled impressive heights in terms of development. But the BJP says it will end Dravidian politics.

A/ I would request you to get the answer to this question from the BJP itself.

Q/ There have been reports that the BJP was hesitant to accept you as the chief minister candidate of the National Democratic Alliance.

Q/ As chief minister, can you tell us about the kind of pressure you have faced from the BJP?

A/ I have not faced any pressure from the BJP. Our prime minister and Home Minister Amit Shah wholeheartedly respect the AIADMK and they want our party to grow. They want the state government to ensure welfare measures for the people. My government and I are like their favourite children. Things might look different from outside. But inside everything is different. When Shah came here to inaugurate projects worth Rs70,000 crore, he was all praise for the state government.

Q/ The BJP took out the Vel Yatra, but your government controlled it tightly.

A/ Every party has its own ideology. And the BJP, too, goes by its ideology. But I am the chief minister for all people in Tamil Nadu. My government acted based on the law and order situation.

Q/ You declared Thaipusam to be a public holiday, ruining the BJP’s plan to use Lord Muruga for political gains.

A/ My name itself is Palaniswami. And I am a devotee of Lord Muruga. I declared Thaipusam a public holiday as it was a long-pending demand of the devotees, especially from southern and western Tamil Nadu. I still remember the days when my sister used to visit Lord Muruga at Palani on foot, and I understand the feelings of the
devotees.