The assembly polls are a chance to fill the vaccum left by Karunanidhi, Jayalalithaa 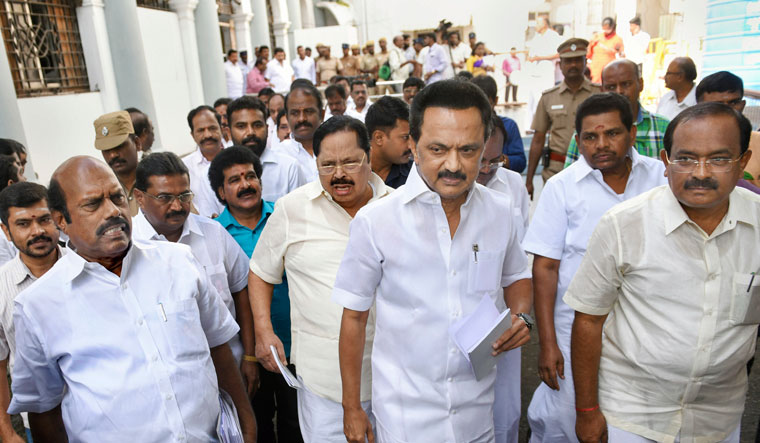 Generation next: DMK leader M.K. Stalin has his own share of internal problems, like the threat of a rebellion by his elder brother Alagiri | PTI

On January 27, as the Parappana Agrahara prison authorities in Bengaluru completed the formalities and released former All India Anna Dravida Munnetra Kazhagam general secretary V.K. Sasikala, the two men who lead the Tamil Nadu government and the AIADMK—Chief Minister Edappadi K. Palaniswami and his deputy O. Panneerselvam—were inaugurating a memorial to former chief minister J. Jayalalithaa. By excluding Sasikala, Jayalalithaa’s long-time companion, Palaniswami and Panneerselvam were making it clear that they intend to keep her out of the AIADMK. But Sasikala and her supporters led by her nephew T.T.V. Dhinakaran are unlikely to give in without a fight. “If we get a massive victory in the assembly polls, we can retain power the way it is now. If not, Palaniswami and Panneerselvam will not be able to handle the AIADMK’s political future. Then we will need a strong leader,” said a senior minister, hinting at Sasikala’s return.

The upcoming elections are a do-or-die battle for the AIADMK and its main rival, the Dravida Munnetra Kazhagam led by former chief minister M. Karunanidhi's son, M.K. Stalin. Fringe players like actor Kamal Haasan’s Makkal Needhi Maiam and film director Seeman’s Nam Thamilar Katchi, too, will find it difficult to stay relevant unless they put up a credible performance.

Palaniswami and Stalin will have to prove their worth as political contenders, but they lack the charisma and the movie background of their predecessors. Palaniswami has launched a poster campaign, presenting himself as a “humble farmer”, while the Stalin team has begun with a virtual tour called ‘Thamizhagam Meetpom’ (Let us retrieve Tamil Nadu). Stalin has also promised to address petitions received during his campaign within 100 days of taking over as chief minister.

For the first time in decades, chief minister candidates are getting involved in ground-level campaigns, meeting voters directly and listening to grievances. “This was unthinkable in Tamil Nadu. Now the chief minister and his challenger are walking through the mud and dirt in our farms and are interacting with voters,” said political analyst P. Ramajeyam. The two major parties have also engaged professional political strategists and are spending crores of rupees on consultancy.

While the electoral battle appeared to be multi-cornered initially, actor Rajinikanth’s decision to shun politics has made things more predictable. He could have taken away up to 7 per cent of the AIADMK votes and 3 per cent of the DMK votes. It would have been a major problem, especially for the DMK as its average vote share is around 25 per cent, while the AIADMK commands around 30 per cent.

Stalin, who has been eyeing the top post for the past two decades, has his own share of internal problems as well. His estranged elder brother, former Union minister M.K. Alagiri, could turn into a rival power centre. Stalin will also have to rein in his son, Udhayanidhi, from meddling too much in party affairs and upsetting senior leaders.

Another challenge for Stalin is the DMK’s poor record on law and order issues. People still remember the arrogance of DMK leaders during the party’s 2006-11 tenure and also the many instances of land grabs. An internal survey has found that even in the western districts around Salem, where there is strident opposition to the Palaniswami government’s decision to build an eight-lane highway, people fear that “rowdyism and land grab might come back” if the DMK returns to power.

The seat-sharing agreement between the DMK and its allies is far from complete. Congress leader Rahul Gandhi recently toured the state to enthuse party workers and also to remind Stalin about the importance of the alliance. The rousing welcome Rahul received was a message to Stalin that the Congress may be just a shadow of its old self, but the party still has not lost its traditional vote bank. Despite the turmoil in the alliance, both parties have announced that they will fight the elections together.

Another DMK ally, Thol. Thirumavalavan’s Viduthalai Chiruthaigal Katchi (VCK), which commands a major chunk of the dalit votes in the state, is also not quite happy as the DMK is reluctant to share more seats. “The DMK had asked us to contest on their ‘Rising Sun’ symbol in the Lok Sabha elections. This time we want to contest on our own symbol, although we won’t hesitate to contest on the DMK’s symbol,” said Thirumavalavan.

Like Stalin, Palaniswami is also engaged in a battle for survival. He is waiting to see Sasikala’s next course of action and also the strength of the challenge posed by Panneerselvam. Although Panneerselvam named Palaniswami as the AIADMK’s chief minister candidate, he continues to take out full-page advertisements in newspapers and release short films depicting him as muthalvan (chief minister).

The AIADMK, too, has recalcitrant allies like the Pattali Makkal Katchi. It has launched an agitation demanding 20 per cent reservation for the Vanniyars, one of the most dominant communities in the state. The relationship with the BJP is also far from smooth as the party is keen to play the hindutva card and is reluctant to endorse Palaniswami as the chief minister candidate.

Palaniswami, however, hopes to beat the odds by invoking Jayalalithaa’s legacy, by projecting himself as a humble farmer leader and by playing up people's fear about the DMK’s poor law and order record.