Back to the battlefield

V.K. Sasikala returns aiming to take back control of the AIADMK and the government 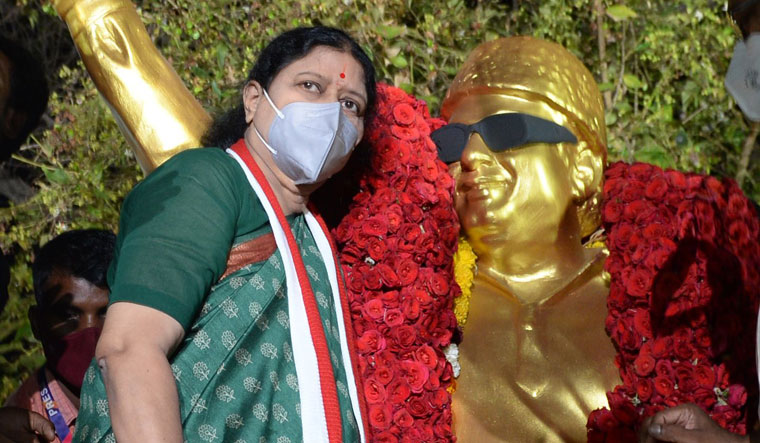 On the morning of February 8, as she set out from a luxury resort outside Bengaluru, V.K. Sasikala—the expelled general secretary of the All India Anna Dravida Munnetra Kazhagam (AIADMK)—made it clear that she was determined to challenge the party leadership for her claim to the legacy of her late friend, former chief minister J. Jayalalithaa. Sasikala started her journey to Chennai in Jayalalithaa's favourite Toyota Land Cruiser flying the AIADMK flag, despite strident objections and legal challenges raised by the party's senior leadership. Clad in a green sari—said to be a Jayalalithaa favourite—and a shawl in AIADMK colours draped around her neck, the 66-year-old Sasikala looked calm, despite the enormity of the situation.

A large number of vehicles joined her motorcade as she rolled out of the resort where she had isolated herself for more than a week after being discharged from Victoria hospital in Bengaluru. She had tested positive for Covid-19 a few days before she was released from the Parappana Agrahara jail in Bengaluru, where she was serving a four-year sentence in a corruption case. The huge crowds, life-size cutouts, posters, banners and garlands welcoming Sasikala seem to have sent out a strong message to her rivals. As she crossed the border and entered Tamil Nadu, she was asked by the police, acting on a complaint by the AIADMK leadership, to remove the party flag from her SUV. Sasikala did not remove the flag, but continued the journey in the vehicle of an AIADMK office-bearer from Krishnagiri district.

Her journey from Bengaluru to Chennai, which normally takes around seven hours, took twice the time as enthusiastic supporters lined up in more than 60 locations to give her a rousing welcome. The motorcade reached Chennai only next morning. Upon reaching Chennai, Sasikala went straight to the Ramapuram Garden residence of AIADMK founder and former chief minister M.G. Ramachandran. The Tamil Nadu government, in anticipation of Sasikala's return, had closed down the newly-opened Jayalalithaa mausoleum on Marina beach and her Veda Nilayam residence which was recently converted into a memorial.

At the MGR residence, party workers welcomed Sasikala with a song written for Jayalalithaa. “Thanga tharagaye varuga varuga varuga (Welcome, golden lady),” they sang, accompanied by high-decibel drum beats. After offering prayers in MGR's puja room, Sasikala paid her tributes to MGR's wife, former chief minister Janaki Ramachandran, at her grave. She left at around 5:30am after garlanding MGR's statue, even as young supporters shouted slogans hailing her as “thyaga thalaivi Chinnamma” (the leader who sacrificed everything). “She is our Amma’s heir. She is the only person who can save the AIADMK,” said Mahendran Perumal, an AIADMK worker who had waited for more than eight hours for a glimpse of Sasikala. “We have lost hope in OPS (Deputy Chief Minister O. Panneerselvam) and EPS (Palaniswami).”

As she got into her car to leave for a relative's house where she is likely to stay for the next few days, Sasikala looked stubborn, but tired. Perhaps the Covid-19 infection and the 24-hour journey with so many stops and speeches would have worn her out. Or else she could be feeling the weight of the enormous challenge she has posed to the AIADMK leadership.

Sasikala said she would talk about her future plans later. Responding to the government's decision to close down Jayalalithaa's beachside memorial, she said, “they are scared”. Sasikala announced that she would return to active politics. But even as she posed a challenge to the AIADMK leadership, she did not rule out a compromise and asked party workers to join hands to defeat their common rival—in an apparent reference to the M.K. Stalin-led Dravida Munnetra Kazhagam. “The party has faced several struggles and has risen like a phoenix in the past,” said Sasikala. “My intention is that everyone must work in unity and not let the common enemy capture the throne.”

Sasikala is no political novice. But she is yet to prove her popularity in elections and also needs to address the divisions within her own extended family first. Yet, she was Jayalalithaa's close confidante for more than three decades. Addressed affectionately as Chinnamma (mother's younger sister) by AIADMK workers, she has been a key player in Tamil Nadu politics. Sasikala belongs to the Kallar sub-sect of the Thevar community, which has always been a reliable vote bank for the AIADMK, and can expect the community's support as Palaniswami belongs to the Gounder community. If the rift continues, Sasikala could dent the AIADMK's prospects in at least 25 constituencies in the six southern districts where the Thevars hold sway. Most MLAs and party functionaries from these districts could ditch Palaniswami as they are upset about the growing prominence of ministers and MLAs from western Tamil Nadu, where the Gounders are dominant. The bureaucracy, too, is increasingly dominated by officers from the region. Till 2016, Thevars had enjoyed an upper hand in the state secretariat and in the party. 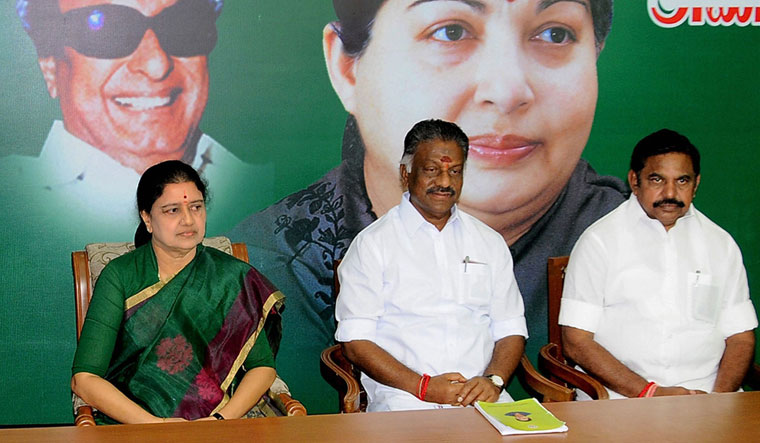 Game of thrones: File picture of Sasikala with Palaniswami (far right) and Panneerselvam. Her return has rattled the AIADMK leadership | PTI

Sasikala’s return has indeed rattled the AIADMK leadership. Senior leaders have objected to her using the party flag and have filed two complaints before the director general of police. “She does not have any right to use our party flag,” said Law Minister C.V. Shanmugam. But Shanmugam and two other ministers, D. Jayakumar and P. Thangamani, who came to speak to the media about the issue, had a tough time answering questions. When it was pointed out that Jayalalithaa was the first accused in the corruption case in which Sasikala had gone to jail, the ministers failed to respond. “It is not good to talk about those who are dead,” said AIADMK presidium chairman E. Madhusudhanan, in an attempt to save the situation.

Following Sasikala's return, the AIADMK headquarters on Chennai's Avvai Shanmugam Salai looks like a fortress, with hundreds of policemen guarding the building. It had witnessed a tense meeting on February 6, when senior leaders including Palaniswami and Panneerselvam held discussions on the upcoming elections. A source told THE WEEK that the meeting turned stormy after Panneerselvam objected to repeated entreaties by speakers on ensuring unity in the party, in an apparent reference to maintaining a joint front against Sasikala. “What do you all mean by unity?” asked Panneerselvam, before leaving the meeting midway. His actions are viewed with suspicion by the Palaniswami faction, as there are rumours that he might visit Sasikala and ask her to take over the party. Adding to the speculation are his newspaper advertisements, depicting him as muthalvan (chief minister) and comparing him with Prince Bharat who ruled Ayodhya as Ram's regent and handed back the throne when the elder brother returned from exile. “There is no history of anyone giving back the throne,” said one of the advertisements.

The Palaniswami government, however, is putting up a brave front. Palaniswami warned Sasikala supporters of tough action on February 9, although he did not name her specifically. “Those who follow Dhinakaran will meet the same fate of the 18 MLAs who deserted us midway,” he said, referring to the disqualification of 18 AIADMK MLAs in 2017 for supporting Sasikala's nephew T.T.V. Dhinakaran, who heads the Amma Makkal Munnetra Kazhagam, the party he launched after his expulsion from the AIADMK. Palaniswami sees Dhinakaran as the brain behind Sasikala's triumphant road show.

The Palaniswami government recently ordered the confiscation of properties in the name of Sasikala's relatives J. Ilavarasi and V.N. Sudhakaran, who were co-convicts along with Sasikala in the corruption case. The Tamil Nadu vigilance and anti-corruption bureau had begun attaching 68 properties cited in the case soon after the Supreme Court verdict in the case in 2017. “They are rattled and these knee-jerk reactions are caused by that,” said Dhinakaran.

In the past few days, thousands of posters and banners welcoming Sasikala have been put up by AIADMK cadres and office-bearers in various districts across Tamil Nadu. In response, the party expelled at least 10 office-bearers. On February 8, at least a dozen functionaries who offered their cars to Sasikala for her Chennai trip were also expelled.

If the fight with Sasikala continues, the AIADMK could face major legal challenges. According to a Facebook post by Jayalalithaa’s former secretary Poongundran, all AIADMK assets are owned by three trusts, and after Jayalalithaa's death, Dhinakaran was made a member of the trust that owns party offices across Tamil Nadu. If it is true, the AIADMK will find it difficult to keep Dhinakaran and Sasikala out of its leadership. Already Sasikala is engaged in a legal fight against her expulsion from the party, and her removal from the post of general secretary.

“Our Chinnamma was the general secretary of the party when she left for jail in February 2017,” said Dhinakaran.“She will soon reclaim the AIADMK.”