Shardul Thakur’s emergence is a result of his long, hard domestic grind 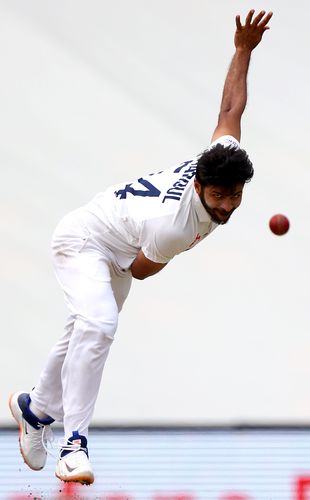 Man for all seasons: Shardul Thakur’s eight-year domestic grind has stood him in good stead | AFP

Shardul Thakur has personality traits of both Ajinkya Rahane and Rohit Sharma, his Mumbai teammates. He has Rahane’s quiet, understated competitiveness and the forthrightness of Sharma, with whom he shares a childhood coach. The grapevine has it that he once asked senior selectors to release him from one of his teams ahead of a match he was not playing in so that he could play for his club. This was not arrogance; all he wanted to do was play.

So, when he got the opportunity to play in the final Test of India’s Australia tour, the bowling all-rounder grabbed it. In only his second Test, Thakur, 29, took seven wickets. The bonus was his batting. In the first innings, he scored 67 and forged a 123-run seventh wicket partnership with debutant Washington Sundar (the duo batted for 36 overs on day three), which turned the tide against the hosts.

As the world waxed eloquent about the discovery of all-rounder Thakur, in Mumbai, his coaches—childhood coach Dinesh Lad and former Ranji Trophy side coach Chandrakant Pandit—were not surprised. “He performed like a [seasoned] professional,” said Lad. “He always used to bowl well, but I am happy with his batting temperament.” Pandit, a former India stumper, said: “He always had the potential as an all-rounder. He is a player who has the courage to go into [any] situation and get the job done.” 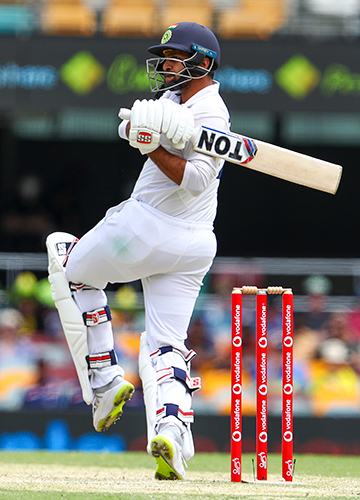 Poised to succeed: Thakur bats on day three at the Gabba | AP

Thakur said that he was only thinking that the longer he batted, the smaller Australia’s lead would be. “I just wanted to spend time on the pitch,” he said. There was no extravagant celebration after getting a wicket or scoring his maiden Test 50. He had waited more than two years for this second chance. His Test debut in 2018 against the West Indies at Hyderabad only lasted 1.4 overs because of an injury. “It wasn’t easy to go back and grind it out in domestic cricket,” he said. Then, getting a wicket off the first ball on his Test return was like a dream come true, he said.

Thakur hails from a middle-class family in Palghar, 87km and two-and-a-half hours by train from Mumbai. He was spotted during an under-15 tournament; in one match, he took six wickets and hit six sixes in an over. Lad approached his parents to have him transferred to the school in Mumbai where he was coaching. But his father, Narender, a farmer, refused as Thakur would be in class 10 the next year and travelling for five hours daily was not feasible. But, Lad eventually convinced Thakur Sr to allow his son to stay with him in Mumbai. “I told his dad that if he moved to Mumbai, he would play a high level of cricket,” said Lad. “In his age group, he looked the fastest to me.”

Thakur rose steadily through the ranks, playing for India A, Board President’s XI and Rest of India. In 2014, the Indian Premier League beckoned with Kings XI Punjab signing him for Rs20lakh. But, he got just one match in his first two IPL seasons. He moved to Mumbai Indians and then Chennai Super Kings. His journey to establish himself in white-ball cricket continues, but Lad said the domestic grind of over eight years has helped Thakur play as per team requirements and match situations. Pandit said the key to him looking the part was his mental and physical strength. He added that Thakur had good temperament and was willing to bowl at any time. “Even in the last over, he will bowl with pace,” he said. “He is a very good fielder, too. He is the full package as a cricketer.” Pandit added that it was apparent that Thakur had worked a lot on his fitness.

Thakur has been selected for the four-Test series against England. But, he may have to wait on the sidelines as Hardik Pandya returns to the side. Lad said that he felt Thakur had done enough for the team management to keep faith in him. “A good all-rounder can always get the chance,” he said. “I am confident he will get a sustained run in the team.”