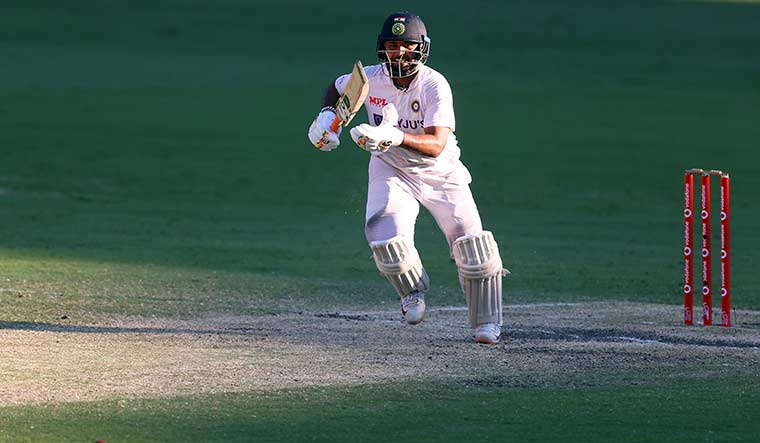 Running high: Pant’s heroics with the bat have given him a new lease of life, but he has to improve his wicketkeeping skills to fully resurrect his India career | AFP

Spiderman, Spiderman... Rishabh Pant was heard singing from behind the stumps on the fourth day of Brisbane Test match. He was not randomly humming the Spiderman theme, but was egging on off-spinner Washington Sundar. Aise web pheko web, aise karke phishh... (catch them in a web of spin) was his advice to the debutant bowler. Pant was back in his element; chirpy and spirited right up till he hit the winning runs at the Gabba to help India retain the Border-Gavaskar Trophy.

But, till the second Test in Melbourne, the baby-faced wicketkeeper batsman had little to cheer about. His Indian Premier League season with the Delhi Capitals was subpar; he was dropped from India’s white-ball squads, and senior wicketkeeper Wriddhiman Saha was preferred in the first Test in Adelaide. Pant played the second Test in Melbourne and—apart from dropping Pat Cummins off R. Ashwin in the second innings—the match went without major mishaps for the 23-year-old.

The third Test in Sydney, however, was a horror show from Pant the wicketkeeper. He dropped debutant Will Pucovski twice (the Aussie made a half century) during the rain-affected session on day one. First off Ashwin (on 26) and then in a botched-up juggling effort three overs later (on 32) to deny pacer Mohammed Siraj a wicket. Pant redeemed himself with the bat in the second innings. Sent in by captain Ajinkya Rahane at No 5, Pant scored a counterattacking 97 which helped India draw the match from a disadvantageous position. He took it a step further with his 89 not out in Brisbane.

Ricky Ponting, former Australia captain and Pant’s coach at Delhi Capitals, summed it up well when he said that Pant’s batting was always going to outweigh his keeping issues. “Since his debut in Test cricket, he’s dropped more catches than any other keeper in the world. That highlights he has got some work to do with his keeping,” he told the Cricket Australia website. Ponting had called for Pant to be picked ahead of Saha post the first Test. The same man later said that the catches Pant dropped in Sydney “were two that should be taken, simple as that”.

Coach Ravi Shastri was all smiles when asked about Pant’s batting after the historic win. “You can’t change his cricket! He is a good listener, understands that he has to strike a balance between caution and recklessness,” said Shastri. “He learnt a lot from the Sydney match. The story could have been different had he stayed on for 45 minutes more.” Skipper Ajinkya Rahane revealed that the message to the batsmen on the fifth day of the Gabba Test was simple: Fight till the end, do not think of the result, take it session by session. But Pant, being Pant, had a different plan. “Around tea time, Rishabh decided to take matters into his own hands; he was looking to chase down the total,” said Rahane.

The Australia series perfectly encapsulated the story of Pant’s three-year long Test career—Dr Jekyll, the batsman, and Mr Hyde, the wicketkeeper. Former India wicketkeeper and chief selector Kiran More told THE WEEK: “His glove-work has really gone down in the last one year. Before that he had about 12 matches, 62 victims—the percentage was high.”

When the training camps for the IPL started and Team India support staff got in touch with the regulars in the national squad, it was reportedly found that Pant had put on weight. During the IPL, Pant is said to have focused on shedding the extra kilos and retaining fitness. By the time he landed in Australia, he was 10kg to 15kg lighter. However, the focus on fitness reportedly led to lesser work on wicketkeeping. 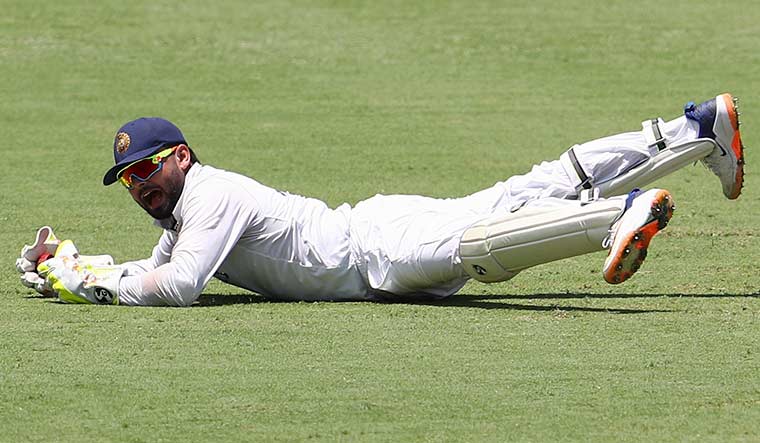 Eyes on target: Pant reacts after taking a catch to dismiss Matthew Wade on day four of the Gabba Test | AP

Vijay Dahiya, Delhi Capitals head talent scout and former India stumper, said: “In white-ball cricket, we are always looking for a batsman who can also keep, but Pant is a genuine wicketkeeper.” He added that though Indian players mature fast thanks to the large number of matches they play till the under-19 level, there is still a transition period at senior level, especially in Tests. He added that Pant left the domestic grind early to be an international player. “I saw Pant closely during IPL,” said Dahiya. “If he works a little more on the mental side, I think you will see him surpassing all wicketkeeping records in India.”

Dahiya pointed out that though Saha, too, has dropped catches, no one has questioned his wicketkeeping technique (Pant’s technique has been called faulty). “Somewhere down the line, you need to be at peace with yourself to keep wickets well,” said Dahiya. “It is a thankless job. Somewhere, he was fighting with himself, because he was sensitive to all the talk about weight gain. He changed his diet to lose weight and was so focused on it.”

Acknowledging the quandary over selecting Pant, More said that he was a key player who could provide balance to the batting line-up. “He can do what Adam Gilchrist did at No 7 for Australia,” said More. “He can change the game in any situation. That is what he did in Sydney, too. He is a match winner at the end of the day. I like his intent every time he goes out to bat, his approach to his batting.”

Pant came through the ranks of the Sonnet Club in Delhi, which has produced India internationals like Manoj Prabhakar, Akash Chopra, Atul Wassan, Raman Lamba, Anjum Chopra, Ashish Nehra and Shikhar Dhawan. Coach Tarak Sinha, who runs the club, said that the lockdown and the lack of any competition for about eight months resulted in Pant’s wicketkeeping skills going downhill. “He was at home in Roorkee during lockdown, where he was unable to practise. All cricket facilities, even in Delhi, were shut,” said Sinha. “In T20, you can get away with below par glove-work, but in Test cricket it needs to be very good. I am sure he will improve. He has kept abroad in previous series and his keeping was okay. None of the issues he has with his wicketkeeping are ones that cannot be sorted out. We will work on it when he gets time.”

But others point out that wicketkeeping work can be done on one’s terrace if need be. Dahiya said if Pant focuses solely on wicketkeeping skills for a few weeks, it could really help his case. “He needs to figure it out, where he wants to work,” he said. “From what I have seen during the IPL, he has keeping skills; the more you work on them, the better you become. Let us start with simple things. Don’t go for first slip catches, catch those coming towards you. And if he makes a few more runs consistently, he will become more confident in both departments.”

Meanwhile, Sinha rues his ward’s missed centuries more. “I expected him to score a century—he also missed two centuries against West Indies at home in 2018,” he said. “[At Sydney,] he could have won the match for India. But, it doesn’t matter. He played a role in India drawing the match. It was important for Rishabh personally, since he was being criticised for his wicketkeeping. He had to do something.”

More said the issue with Pant’s keeping seems to be both technical and a result of the lack of time spent on it. “I think he is not working enough; if he is, it is not in the right direction,” he said. “His hand position is very poor, stance is wrong, he is falling back; when he gets up he gets up very upright and his hands are too far off from his eye and head position. That’s why he tries to push the ball down.” More has worked with Pant in the past, but recently it has only been for a day or two at a time. It will take time to iron out the issues, said More. “It is a process,” he said, adding that he needed Pant to spend more time with him.

On returning from Australia, India is scheduled to face a visiting England. Both Pant and Saha are in the squad for the series. The team management has generally gone with Saha at home (on low, turning wickets) and Pant abroad (on more bouncy pitches). With Pant having an advantage over Saha with respect to batting, it remains to be seen which way the Indian think-tank will go. Sinha said the onus was on Pant to improve his keeping. “He has to work harder, if he wants to cement his place he will have to,” he said.

More is backing Pant ahead of Saha, even at home, for the England series. “I will still punt on Pant against England,” he said. “When you play on turning tracks in India, there will be lots of chances. The problem in Australia is that the odd ball turns, that’s why he is grabbing at the ball. You are in the game in India all the time. In Australia, I sometimes felt he was not in the game at all.”

Pant’s heroics with the bat at Sydney and Brisbane may have given him a new lease of life, but it will take real effort to resurrect his India career fully. With the likes of Sanju Samson and Ishan Kishan waiting in the wings in the shorter formats, Pant has to spruce up his wicketkeeping skills and fast. More feels a wicketkeeping coach who will track all India hopefuls is a must. “You need specialist coaches to work with wicketkeepers like Samson, Kishan and Pant,” he said. “Someone needs to tell the wicketkeepers that run-making is fine, but you need to keep wickets well. You cannot carry on like that. That message needs to go to all young keepers.”