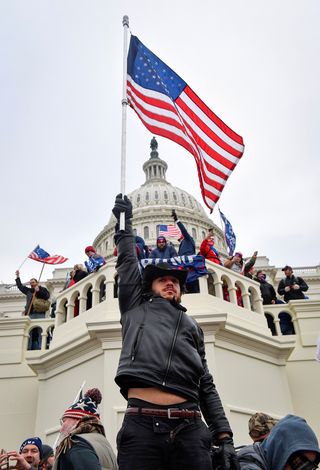 When the US Capitol Building was last stormed, in 1814, the British had set it on fire. It took five years to mend. The physical damage of the pro-Trump violence—on January 6—would take a few weeks to repair, at most. The graffiti can be wiped clean, the broken windows fixed, the furniture restored. But the damage done to the image of America will endure.

It was in 1793 that George Washington laid the Capitol cornerstone amid much pomp and circumstance; there was even a celebratory barbecue later. William Thornton, an amateur architect and rarely practising doctor, had won the competition for its design. Many architects and redesigns later, the building stood complete in 1826.

The Capitol is the seat of the legislative branch of the US government. It is where the Congress meets. And it was during such a meeting, a joint session to certify Joe Biden's victory in the presidential elections, that the mob descended upon the hallowed grounds.

The Statue of Freedom looked down from the Capitol Dome as the rioters fought the police, breached the barricades and entered the building. In the violence, five people, including a police officer, lost their lives.

The Trump supporters barged into the house chamber, where the representatives and the senators meet, but the room had been evacuated. The building has senate and house wings, which have the respective chambers and some offices. Some of these offices, including that of house speaker Nancy Pelosi, were broken into; a man took a photo of himself sitting in her chair, his legs on her table.

They also got to the Rotunda—a large, domed, circular room in the centre of the building—that has some of the most treasured pieces of art in the country. While 'The Apotheosis of Washington', a fresco featuring the first president alongside several allegorical figures, was out of reach, most of the other works were exposed. “Particularly vulnerable was the National Statuary Hall to the south of the Rotunda, which contains 35 statues of prominent Americans,” said The New York Times. “[However], the singular works of art that curators consider the treasures of the building did not appear to have suffered any major damage.”

Videos the vandals took themselves showed a man cramming a photo of the Dalai Lama into his backpack; another rioter was reportedly smoking pot in a nearby room. The bust of former president Zachary Taylor was defaced with a red substance, possibly blood.

In a surreal scene, the rioters were seen walking around in the Crypt like deranged tourists, brandishing selfie sticks as they took in the history of their country, much of which they did not like.

The Crypt has 13 statues representing the original colonies and a star at the centre of its floor. It's the point from where the streets in Washington are laid out and numbered.

The rioters had taken the Pennsylvania Avenue to reach the Capitol; Trump had allegedly injected them with rage. They unleashed it on a national monument.

The Capitol has seen worse, but not from its own.